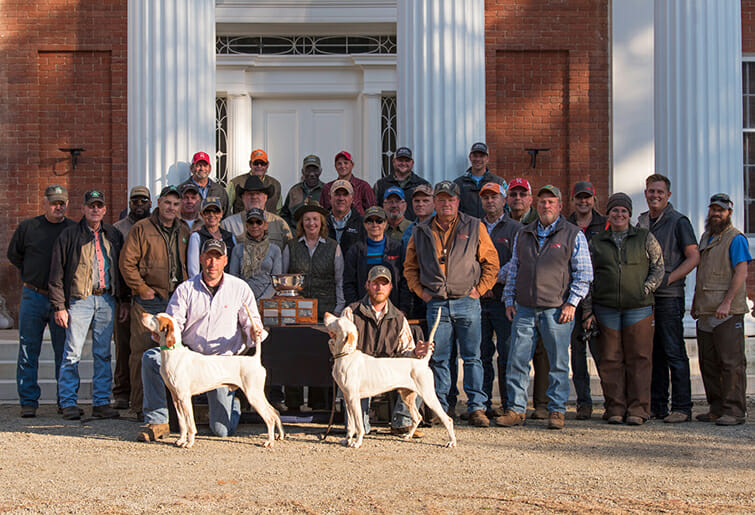 As most of you know, Dixie Plantation is owned by Tall Timbers, but operated as a separate LLC with its own budget; it has to pay its own way. This is a challenging proposition, but one we have been able to accomplish now for our four years of ownership. The leasing of quail hunts is an important part of our income, so it is not insignificant to give up two weeks of the season to host a field trial. To make up for this, the Continental Field Trial Club has made a sizable donation each year from the proceeds of the trial that go directly to the operation of the property. The majority of these funds come from sponsorships, donations, and fundraisers held by the club, as entry fees alone just do cover the cost of putting on the trial and paying out of prize money.

From the very beginning of Tall Timbers’ tenure at Dixie, there were concerns from the trial participants about increased hunting on the property and what effect it would have on the field trial. Our new lease hunters likewise expressed concern about the effects the trial may have on their hunt quality after the event. We have been very careful to manage the hunting activity on the plantation, and have researched the effects of the trial on hunt quality. In fact, we published a paper in last year’s National Quail Symposium, which documented the lack of effect the Continental had on quail survival or post-hunt quality. Despite this, we still hear comments every year during the trial about the birds being wild and hard to find and/or point. These comments seemed to be more prevalent than normal this year, as adverse weather through the weekend made things tough. Unfortunately, this is also the time of the largest galleries and the birds did not show well for a couple of days. It is easy to blame this on hunting pressure, but this conclusion is uninformed. Hunting pressure is carefully controlled and evenly distributed on the 10 half-day hunting courses at Dixie, with each course hunted only once in a 2-week period. This results in these courses being hunted 3-4 times in the two months of the season prior to the trial. This level of hunting is typical of hunting on any private property and not enough pressure to affect the field trial.

The field trial itself runs over these same courses 12-14 days in a row. It’s no surprise then that coveys can be more difficult to find and/or point with this level of disturbance. They are pure wild quail—one of only a handful of field trial venues left in the country where this is the case. Our telemetry during the trial has demonstrated that coveys shift their use into heavier cover after the trial has been going a few days. It does not take long for the birds to settle down and resume their normal pattern once things have quieted. In fact, one of our lease groups hunted for two days, one week after the trial, and saw 46 coveys, pointing 40 of them. They left happy and expressed their appreciation for being able to use and enjoy the property.

Each year we receive a lot of positive comments from field trial participants for the progress made on habitat over the past three years. Occasionally, however, a few concerns are heard and rumors make the rounds during and after the Continental. This year’s rumors centered on Dixie having run out of money and that we quit feeding quail because we spent so much money on the main house that we can no longer afford to buy sorghum. It is humorous to us, but when we continue to hear these comments circulate weeks after the trial, we figured we better set the record straight. Rest assured neither of these is anywhere close to the truth. Dixie is fed exactly in line with the “industry standard” on plantations—1.5 bushels per acre/year, once every two weeks, year round. A diverter shield on the spreader puts the feed in the cover and not on the trails where it can be easily seen. It’s true we are rehabilitating the main house, which was badly needed. Most of the funding for the renovation has come from two Florida Department of State, Bureau of Historic Preservation Special Category grants secured by Tall Timbers, as well as significant private donations. Dixie has contributed some matching funds, but none of them has come from our quail management budget.  In fact thanks to local donations, we have been able to expand our work on quail and now employ a full-time biologist at Dixie to help improve our efforts there.

Habitat on Dixie is an exciting work progress. There is still work to do on several fronts, including finishing the hardwood cleanup, thinning of CRP pines (they come out of the program in 2019), continuing to reduce the Predator Index, controlling Bahia grass, modifying the farming program as well as completing the Main House restoration. We remain committed to our primary objective of having a world-class wild quail hunting operation and field trial grounds—we are doing all we can afford to do to get there. We have a hard-working and dedicated staff. If you are fortunate to visit the property please thank them for what they do next time you have a chance. We appreciate the support and encouragement we have received from many of you and look forward to a long and beneficial relationship.