A Crazy Year for Sparrows

The well managed pinewoods of our region serve as the winter homes of nearly 14 different species of sparrows. Much like many landowners of the region, these sparrows conduct their breeding season activities all across North America but then head our way starting in late October. The winter of 2011-12 will have to go down as one of the most unusual on several fronts.

Last winter was absolutely phenomenal for one of the rarest wintering sparrows we have. Henslow’s Sparrows have undergone tremendous declines in recent decades and are estimated to number as few as 100,000 total individuals. Using mark-recapture survey procedures on Arcadia, Elsoma, and Beechwood plantations, we typically find a density of 0.4 Henslow’s Sparrow per acre. This past year, we document a density of 8.5 individuals per acre on two of the study areas. We banded over 50 new individuals and recaptured 5 individuals banded in previous years on this sites. Late April burns coupled with drought conditions last year appeared to create very good conditions – tall flowering stalks with lots of seeds but with very little vegetation at ground level. One sparrow caught us by surprise when we realized it had lost the use of one of its eyes (photo below). Life can be rough, but animals also have methods for dealing with adversity. 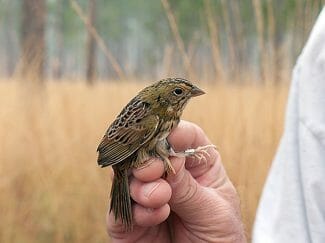 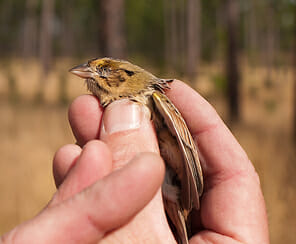 We also had some special sparrow stars make an appearance on Tall Timbers. Elliot Schunke and Matt Klostermann spotted a Green-tailed Towhee and Lark Bunting on the property one morning when they were out doing some nuthatch work. Both species occur out west and rarely show up this far east. A number of Green-tailed Towhees have been seen outside their normal wintering range this year, but the bunting drew crowds of birders to the property on a couple of special field trips that were organized (some driving over 300 miles in hopes of seeing the bird). 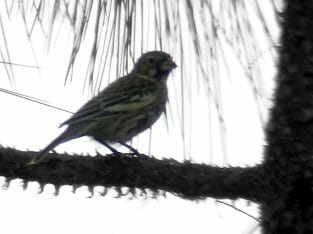 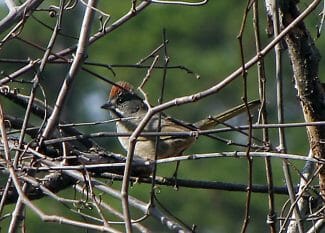