In July 2017, the Stoddard Bird Lab was working on a genetics project that required netting and securing DNA samples from lots of Bachman’s Sparrows in peninsular Florida. The study was an extension of some previous work we’d done with Dr. Sabrina Taylor and her students at Louisiana State University, but the effort that summer yielded a big surprise.

One of the males we netted in central Florida turned out to be a big trophy catch because it’s plumage characteristics typically associated with sparrow populations found far north and west of central Florida. The feathers lacked the black centers commonly found in the other males we netted nearby, and the tone of the back, head, and wing feathers was much brighter with distinct orange hues (Fig 1A). Bachman’s Sparrows exhibit striking variation in plumage throughout their North American range, and the male we netted in central Florida that day had characteristics described for sparrow populations that breed much further north and west of peninsular Florida. 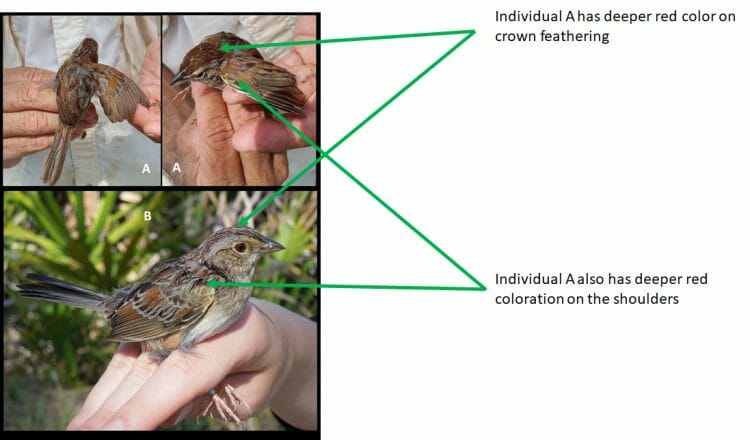 This unusual catch could help to explain some of the results we’ve seen in our genetic work with this species. Despite the presence of distinctive feather colors among populations that are separated by large, geographic barriers (e.g., Mississippi River), there is no hint of any genetic differences among these populations. The genetic data suggest regular exchanges are taking place across broad geographic areas, and this trophy catch may simply have been the first visual documentation that we have of that type of regular exchange. We suspect this male moved into central Florida from Oklahoma, Arkansas, or another distant location, and then decided to test his luck with the locals. More details are provided in an upcoming issue of the Florida Field Naturalist.