Birds of a Covey Often Stay Together 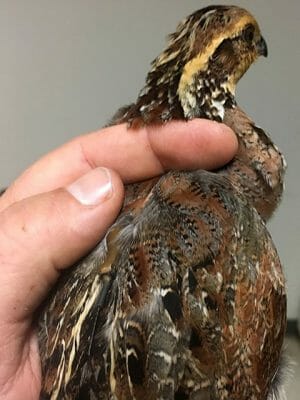 It is well known that bobwhites are highly gregarious birds and live in complex social groups called coveys throughout the non-breeding season to avoid predators through increased vigilance, thermoregulate and forage efficiently. Research suggests that the optimal covey size for bobwhites is 11-12 birds, and numerous factors can influence covey dynamics and behavior, such as loss of individual covey members through either or both harvest and natural mortality.  Some of our past research also supports the notion that higher interrelatedness, genoptypically speaking, exists within coveys and among nearby coveys, compared to more distant covey groups.

Based on tracking thousands of birds over the years, we know that fidelity to covey groups varies among individuals and coveys. For example, some birds stay with a covey for an entire hunting season; and some birds that survive long enough will even regroup with former covey members in subsequent hunting seasons; and yet other individuals hedge their survival bets on floating from one covey to the next throughout the hunting season. This year we observed a couple of unique occurrences during our annual trapping.

The first occurrence involved multiple chicks from the same brood that were initially captured and radio-tagged at 12 days of age, and were captured together with their mother nearly 7 months later. Two of these chicks were banded and one was radio-tagged in July (see Figure). In the second incident, we captured a covey where nearly half of the birds were previously banded with the band numbers: 130350; 151203; 160212; 161253; and 170213. The interesting thing about this covey was not that so many were banded but rather how old they were – 2 birds were greater than 1 year old, 1 bird was greater than 2 years old and 1 bird was greater than 4 years old! The collective survival experience of these 5 birds is greater than 8 years — the odds of this occurring is less than 1 in 175,000. In either case, these success stories positively point to both good survival and good over-winter survival. We put new radio-tags on several of these birds, and hope to gain more insight into bobwhite survival in doing so.