It was a great wild quail hunting season

The 2020–2021 hunting season for wild quail was another great one in the Red Hills and Albany Areas and across the Southeast! Locally, some properties had one of their best seasons on record. Additionally, properties in the Carolinas, Alabama, and Central Florida observed high covey finds for their respective areas, further increasing landowner interest in wild quail hunting opportunities. What facilitated this year’s successes? Overall, hunt success is due to a combination of good cover conditions, high bird carryover, and favorable scenting conditions. Clay Sisson, the Director of the Albany Quail Project and Livingston Place Research further provides the following reflective thoughts and future perspective:

This “bull market” has been the result of excellent management helped along by good summer weather, high cotton rat numbers, and a widespread new ground effect, as a result of cleanup following the 2017 tornadoes and hurricane Michael in 2018. We documented these high-density populations back in the fall, but it’s always interesting to see what the hunting season brings. Despite a warm and dry forecast, we had great weather most of the season. Abundant rainfall and cool temperatures made for good hunting condition’s right up until the last week of February. These high densities and good hunting weather made for a memorable hunting season that was at or near record levels in some cases. 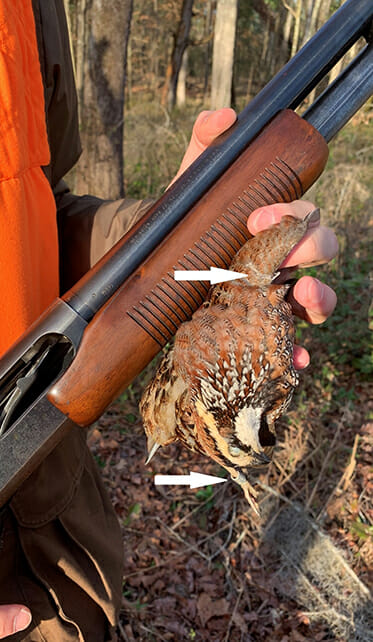 A harvested bird that was wing tagged as a chick and leg banded later as an adult.

One thing we heard over and over this year was how “wild” the birds were during hunts. While we hear this every year late in the season, this year it was widespread throughout the season, and much more than usual. We think this is due, at least in part, to the high-density populations and high carryover the previous few years (see diagram). In oversimplified terms think of it like this: at the 25% annual survival we have averaged the last few years, there are 4 birds in every 16-bird covey that were around last hunting season, and one of these was around 2 seasons ago. They know the drill and are “teaching” the newcomers how to evade you. Most of you know, as well, how a covey of birds can’t stand to hear another one fly. To them this means something is wrong, and chances are they are going to get up and go with them, if they are nearby. In high density populations, the chance for this occurring is high, with it not being unusual to see multiple coveys in the air at one time. While this is fun to see, it leads to an overall lower percentage of coveys being shot at. This is like the landowner with too many saw timber pine trees; it’s a good problem to have. 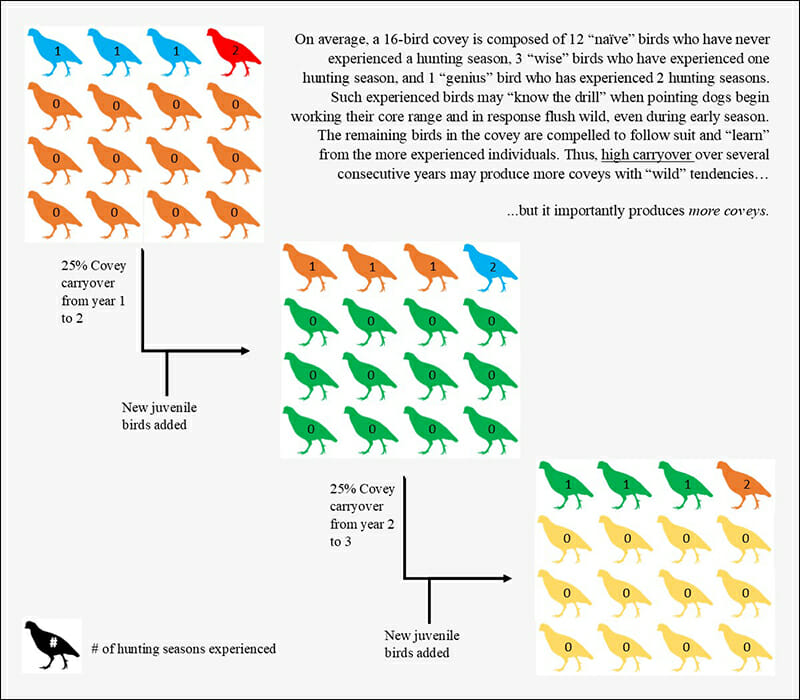 Carryover this year, so far, is again very good. Radio-tagged quail survival at the end of February was 74%, 56%, and 47% at our Albany, Livingston Place, and Tall Timbers’ sites, respectively.  All are close to or above long-term averages. Unless the wheels come off in March, we will have very good “carryover” into the official beginning of the breeding season on April 1. This is all good news and reason to be optimistic; however, we also know that it is not a matter of “if”, but “when” this bull market will end. The best position to be in when that occurs is with high spring breeder numbers so that the population does not fall too far and can recover quickly. Keep your fingers crossed that these abundant rains we have experienced will continue when we need them throughout the growing season.