Insects (or invertebrates to those “sciency” types) have long been recognized as the most abundant and diverse group of organisms, representing more than 80% of the world’s species. Their contribution to ecosystems is multi-fold such that they serve as: decomposers; herbivores; food staple for many species including birds and especially bobwhites; dispersal agents (e.g., disperse seed, pathogenic agents), and unmatched pollinators. Relative to their abundance, however, we have done little research on evaluating their presence, diversity and abundance germane to soil type in the Red Hills region. Thus, our aim is to sample insects across the Red Hills region (an beyond) to better understand the drivers of spatial and temporal fluctuations of insects relative to soil type, stand and habitat type, and management treatments (e.g., fire, fields, etc.) to inform on-the-ground management beneficial to bobwhite.

We recently partnered with a private property in coastal North Carolina, to restore quail on a Sandhills site through translocation. Given the sandy nature of the study site, land management established and maintained open fields in an effort to increase the diversity and abundance of insects. This was important because the diet of bobwhite chicks is primarily comprised of insects as they contain irreplaceable power-packed nutrients (proteins and lipids) needed for rapid growth and feather development, and the need for quality chick production and survival is inherent for the success of translocation. A considerable amount of time and cost was associated with field establishment and maintenance given the nature of these soils, requiring targeted soil inputs and amendments such as locally sourced agriculture waste, acting as a natural fertilizer to boost poor native sandy soils. As such, to determine whether the practice of maintaining fields should be continued and if they were indeed producing increased invertebrate food resources, we sampled insects in burned, unburned piney woods, and open field sites throughout the spring/summer field seasons during 2014 and 2015. Samples were collected by sweep-netting and a D-Vac insect vacuum, and resulted in the collection of invertebrates from two different Classes: Insecta (insects) and Arachnida (spiders and mites).

After collecting and identifying over 6000 invertebrate specimens for the two year period, it is clear that open field sites are far outpacing either burned or unburned piney wood sites. Over the two year period 62% of all specimens came from field sites, whereas burned and unburned piney woods contributed only 19% each. The six most represented Orders are: Araneae (spiders), Coleoptera (beetles), Diptera (flies), Hemiptera (true bugs), Hymenoptera (ants and wasps), and Orthoptera (grasshoppers). We look forward to this field season as we will continue to sample insects as it relates to specific habitat use by bobwhite chicks on this study site.

In an effort to better understand how different ecosystems and land management practices affect invertebrate food resources related to quail, we will be expanded to other sites across the Southeast. Another spin to future specimen analysis will be the addition of a microbalance, so that not only can we compare the raw number of specimens collected, but the biomass each site produces. We are still looking for a couple of candidate sites in the Red Hills region to conduct insect sampling so contact Theron if you are interested. 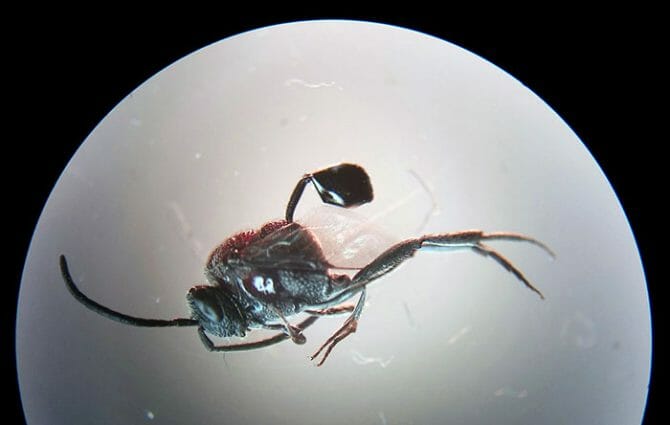 An ensign wasp was among the specimens collected, here viewed under magnification. The ensign wasps are parasites of the egg capsules (ootheca) of cockroaches and are likely to be found on the forest floor where cockroaches occur. 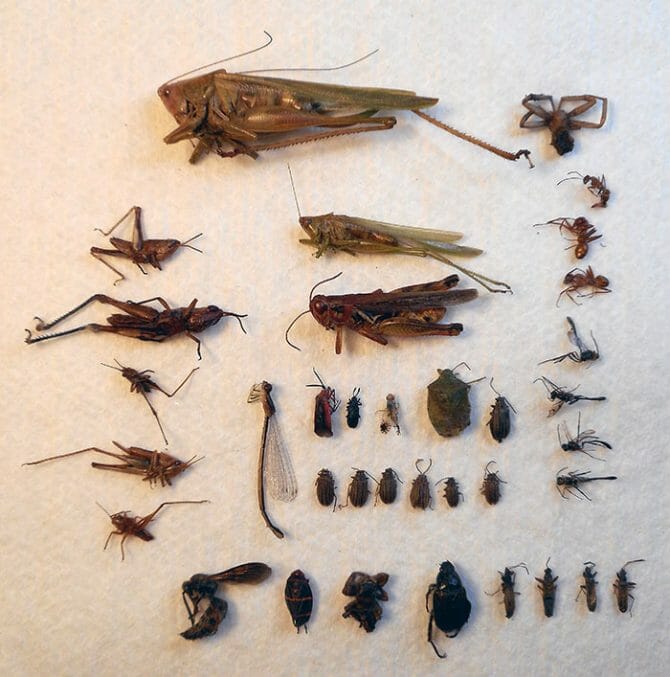 A smorgasbord of insects sampled on a quail plantation in coastal North Carolina.