Covey call counts on many properties in the Red Hills region and Albany area indicate populations are up from last year about 30% on average with some areas seeing even higher bumps than others. We attribute this uptick to both solid over-winter survival, carrying good bird numbers into the breeding season from the previous fall, and decent amounts of rainfall, which was fairly well distributed throughout the nesting season. Our new research using thermal imagery to count bobwhite chicks indicated that chick survival was good throughout the season with the exception of a short period in early July; more than 9 inches of rain occurred in 10 days with no respite of sunny days, which moderately taxed chicks on the ground during that time. Click on the following link to view a bobwhite chick brood via a FLIR thermal camera https://vimeo.com/80478365. (This video has been slowed down 25% to facilitate counting of the 12-day old chicks scattering when approached.)

In addition to good chick survival, we also observed a stellar late hatch this year. Greater than 40% of hens (Figure 1) in late-August and early-September were incubating nests and a large proportion of those successfully hatched. Many managers in the Albany and Red Hills regions corroborated this late hatch by seeing lots of young birds in September and October, which bodes well for fall recruitment. 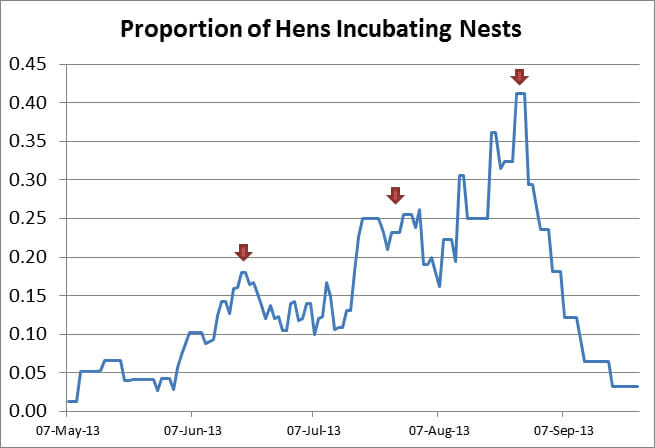 Typically when good over-winter survival, good chick survival, a good late hatch, and favorable weather align in the same breeding season one would expect an increase in fall bobwhite abundance. However, looking at fall bobwhite densities on Tall Timbers (Figure 2), we did not observe the 30% increase like many other sites in the Red Hills region. 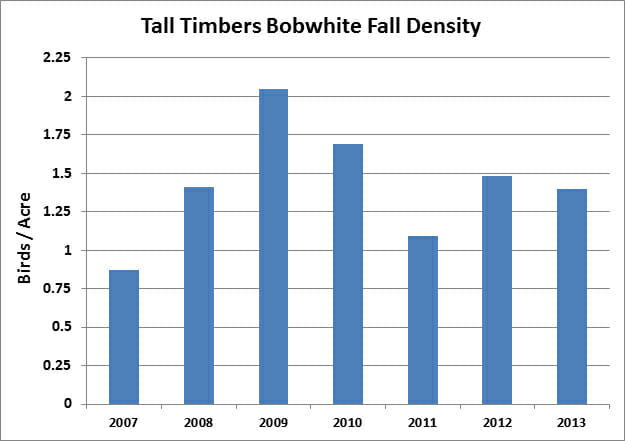 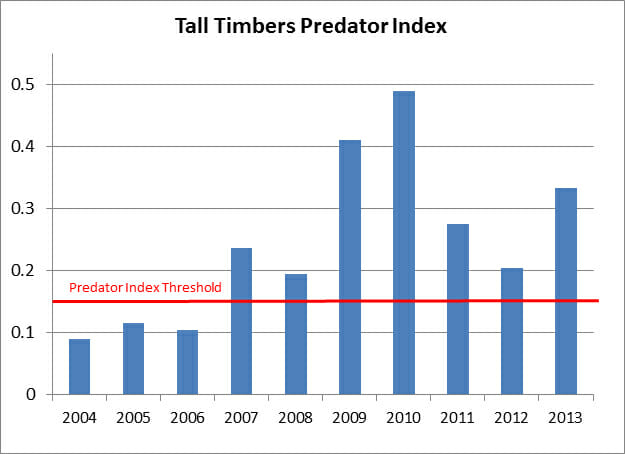 We have found that a predator index below 15% is the preferred range for optimal bobwhite production. For more information on how to implement scent stations and how to estimate the predator index click here.

During 2004 – 2006, as part of a larger research project on the effects of mammalian nest predation on northern bobwhite populations, Tall Timbers underwent an extensive trapping program to remove mammalian nest predators. However, since this time no trapping has occurred. Figure 3 demonstrates how quickly the predator population can respond when predation management ceases. In this study, we were interested in determining how changes in predator abundance influenced nesting success. Since 2006, despite higher than recommended predator indices, nesting success was relatively high (e.g., above 50%; see Figure 4). 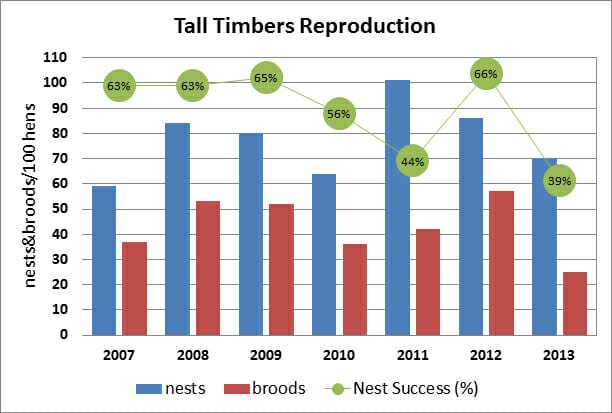 A key lesson here is that, despite high predator abundance and low nesting success, quail abundance remained above one quail per acre. This underpins the importance of sound management including maintenance of quality habitat and supplemental feeding, which are critically important to sustaining high survival of adults. When adult birds survive they can re-nest and ultimately produce young. At the same time, to maximize quail abundance, or grow a new or recovering quail population from low numbers, predator management is often necessary. In addition to high survival, this was a year of favorable weather, good chick survival, and a stellar late hatch (despite the predators) counterbalancing low nest productivity.