It was good day to burn and Dr. Clifton (Bud) Bailey, a certified burner in Florida and Georgia and a longleaf pine ecosystem aficionado, was ready to set a prescribed fire on his property, Shade Farm in Gadsden County, Florida. Before he lit his drip torch, Dr. Bailey—a pulmonologist practicing in Tallahassee—discussed the endowment he setup with Tall Timbers from the sale of his pecan grove, and how it came about. 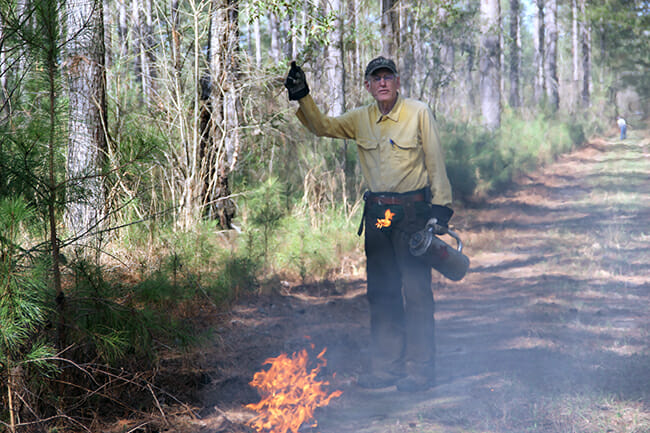 When Dr. Bailey and his partners donated a conservation easement on their property to Tall Timbers in 2011, there were costs associated with the transaction (legal fees, defense fund, etc.) that he says exceeded $25,000. He calls it “give and pay to take the easement.” Dr. Bailey is an advocate for conservation easements, but because the cost of easement donation is not possible for those who he says are “land rich but cash poor,” Dr. Bailey decided to do something about it. That something was selling a pecan grove he had purchased in 1989, establishing the Clifton J. Bailey Endowment. The grove had appreciated in value, so last year (2017) he offered to donate it to Tall Timbers, so it could then be sold to setup an endowment for conservation easement donors.

Dr. Bailey was interested in supporting conservation easements, but also, he has a passion for the longleaf ecosystem. His generous gift brought $550,000 dollars to Tall Timbers Foundation to support both. Our goal is to grow the fund to $1 million so that it can support top graduate students, as well as help conserve the region.

The pecan grove was purchased by Joey Collins, who managed the grove for Dr. Bailey; 2017 was expected to be a good year for pecan growers.  Three days before the sale of the pecan grove in September, Hurricane Irma was blowing her way up the peninsula of Florida, headed for the Tallahassee/Thomasville area as a devastating category 5 storm. A direct hit was expected, which would have severely damaged the grove (and everything else in its path!). But Mr. Collins, the gentleman farmer he is, didn’t back out of the sale. But instead the hurricane tracked to the east much diminished in strength, giving the area a glancing blow as a tropical storm. The pecan grove was undamaged and had the biggest yield in 15 years! And, Dr. Bailey is guaranteed a lifetime supply of pecans!