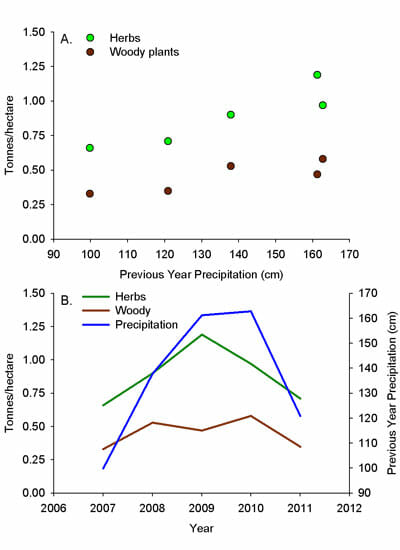 Although we tend to think of a certain habitats as having a certain amount of annual plant productivity, that productivity can vary a great deal from year to year in response to preceding rainfall. For example, in the long-term study of the longleaf pine/wiregrass community at the Pebble Hill fire plots (near Thomasville, Georgia), biomasses of live herbs and woody plant re-sprouts measured in May, one year after burning, correspond to the amount of rain during the previous year (Fig. 1A). During the past five years, herbaceous and woody biomasses have varied by almost a factor of two between certain years in response to rainfall (Fig. 1B).

The link between precipitation and surface vegetation biomass is important in that plant productivity translates to food for wildlife through production of forage, seeds, and insects and corresponds to cover from predators. Plant productivity also predicts available fuel for the next burning season. This year’s drought and low plant productivity suggest there will be low fuel loads in the spring and the need to burn under drier conditions in areas where pine basal area is low, and fuels are mostly grass and forbs. However, for some areas slated for an annual burn, it might be best to allow a year without applying fire, to provide a better fuel bed and compensate for low plant cover.