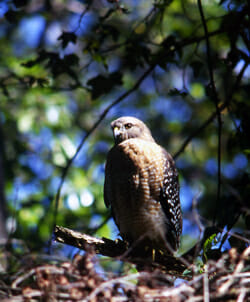 With the extraordinarily warm winter, early spring bobwhites have begun pairing and nest building nearly a month earlier than usual. While the warm weather was not ideal for hunting, it did help with overwinter survival of quail. Our hawk counts over a 10-mile survey route were low this entire winter, and have remained about 20% of last year’s counts over the past several months. With low cotton rat numbers this year, few red-tailed hawks were in the region. The warm weather and few cold fronts appeared to keep migratory Cooper’s hawk numbers relatively low as well. Low disturbance and predation by hawks and owls reduces stress on the birds caused by predation and harassment from hawks. In addition, the recent rainfall has helped habitat recover quickly following early burning, and ragweed fields are growing rapidly providing early habitat. When overwinter survival is high, habitat is good, and densities are relatively low, quail tend to nest vigorously. Over the past 15 years, we have had very few nests incubated during April, but this March, we have already flushed pairs from perfectly formed nest bowls. Our hatch is off to a good start.

The Game Bird Program is thrilled about the generous support our program has received through the Tall Timbers Endowment Campaign to reach its goal of six million dollars! This unprecedented level of funding will allow our program to continue to focus on long-term quail research in the Red Hills and Albany Areas and to tackle some of the most challenging issues in bobwhite ecology and management.  Frankly, the cost of doing research over the past 15 years had escalated to the point that it threatened our capacity to do research. Not now! The stable funding provided by our endowment provides for research staff to radio-tag and track large samples of bobwhites every year, and to invest in the latest research innovations (such as micro transmitters for chicks) solidifies our ability to find limiting factors affecting bobwhite populations. 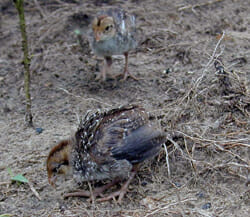 For instance, thanks to our endowment, we are able to begin new research to better understand what factors affect bobwhite chick survival on a daily basis. This groundbreaking work will identify what management can be done to offset the causes of chick mortality. Chick ecology remains one of the last pressing issues in bobwhite management that is still largely a “black box”. We know how many are hatched, and how many survive until the next spring, but what happens in between is unknown. It is important to find management solutions to low chick survival, because the majority of quail population declines are the result of below average chick survival. Improving survival, even 25%, would have huge implications for quail populations. We are excited about the potential for new research at Tall Timbers to provide innovative management ideas and help keep the Red Hills and Albany the best quail hunting areas in the world! Thank you to all that provided contributions and pledges to the Endowment Campaign for Game Bird Program research!