It’s that time of year where the fresh smell of the woods on fire is in the air, and prescribed burning is the focus for most quail managers to keep habitat in check, but for turkeys, breeding is on the mind. As such, springtime is a delightful time of year for the avid turkey hunter in the South, especially when gobbles abound. There is something about that assemblage of syllables, sounding like a cross between a yodel and a clap of thunder, vibrating the trees at daybreak that sends a chill up one’s spine. Indeed, it’s gobbling that makes spring turkey hunting so exciting and worth the pursuit. As most hunters are aware, on some mornings birds gobble their heads off, while other mornings they don’t gobble at all, even when the conditions seem perfect.

Generally, there are two peaks in gobbling: the first typically occurs well before mating begins, and the other during peak incubation. We are currently studying the gobbling activity on multiple sites in Florida, and we have anecdotally observed some interesting patterns such that peaks in gobbling vary from year to year and even site to site. We also know that the timing of these peaks may vary by many factors such as latitude, hunting pressure, weather, or overall bird density. However, it is less clear as to why daily gobbling varies beyond the influence of weather at a particular site from one day to the next.

Hens that are ready to breed typically go to the gobbler—not the other way around. Thus, when hens slip off to lay eggs or begin to incubate a nest a gobbler may “become lonely” and increase their calling behavior or even begin to seek hens out during these times. But, how big and how far are these birds moving? 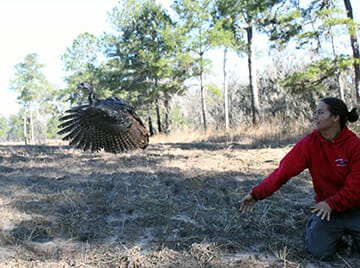 Our current research using backpack-style GPS transmitters is providing us some insight into gobbler movements. So far, we are observing that gobblers will commonly go on long-distance forays, ostensibly in search of a hen ready to breed. In fact, it is not uncommon for individual gobblers to move as much as 1.5 and 2 miles a day or up to 3–4 miles a week! We have also been studying roost site fidelity to better understand how loyal gobblers are to certain roost areas.

Gobblers seem to exhibit a flexible roost site behavior, whereby individual gobblers have varying roosting strategies. Some show higher roost site fidelity than others, but most seem to have 2–5 primary roost sites that are spatially clustered which they visit frequently and numerous others that are less frequented roost sites and more spatially dispersed. The distance between primary roost site locations vary somewhat but are commonly about 0.4 miles apart, with a total circuit being 1 to 2.5 miles (see Figure 1 below). A pattern we are seeing evolve is that gobblers remain loyal to primary roost-site areas (even the same exact tree) for one to a few days, and alternatively roost somewhat randomly in between on a circuitous movement pattern. Currently, about 15% of our tagged turkey hens are incubating nests, so if you are managing for optimal turkey reproduction, wrapping up burning soon would be ideal.

In summary, part of the answer to why a bird doesn’t gobble on a good day may be because they simply aren’t there—they may be out seeking a receptive hen to breed. However, we have seen that gobblers often will return to the same area, and many times to the same exact tree, where they’ve roosted previously, so there is some truth to being patient, and perhaps persistence can pay off. 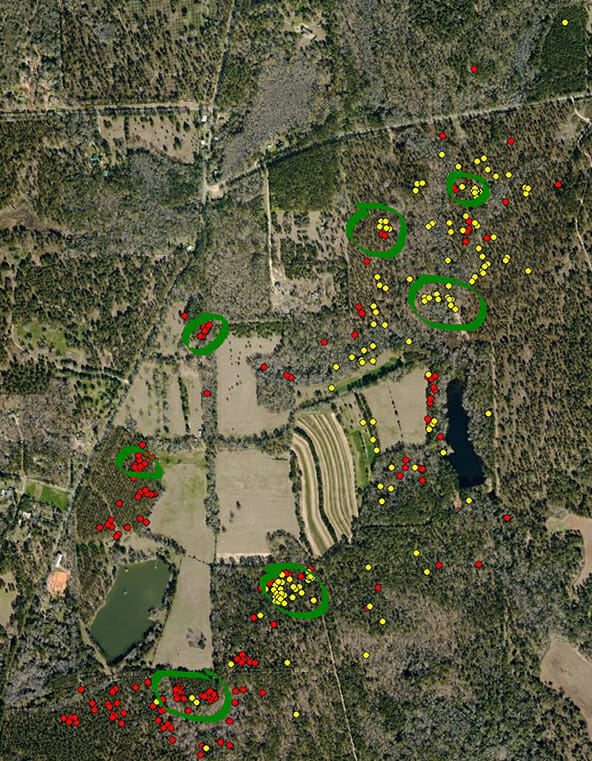 We need your support

If you are interested in wild turkeys please consider donating to this project. GPS units cost more $2000 per unit and last for about 1.5 years. Our goal is to expand monitoring efforts of gobbling activity to multiple sites and multiple years in the Red Hills and other areas of Florida, and continue monitoring nesting activity of tagged wild turkeys on Tall Timbers. Thank you for your support!