Last fall we began a study aimed at monitoring the response of vegetation to reintroduction of fire into pine communities where fire had been excluded for several decades. Our hypothesis was that several plant species survive extended fire exclusion as living roots, even while invisible above ground, then resprout following fire re-introduction. We set up pre-burn plots at six sites; four of them were burned early this year: Plank Road State Forest, FSU Gulf Coastal and Marine Lab, St. Joseph Buffer Preserve, and a mountain longleaf site near Weogufka, Alabama.

Each of the burns appear to have accomplished the tricky objective of top-killing the overgrown broadleaf woody vegetation, while not consuming much of the accumulated duff, which can be especially lethal at the bases of pine trees. The pines still look healthy, but we will hold judgement until they survive their first year.

The vegetation response so far has been subtle but interesting. As expected, most of the woody plants that were top-killed have resprouted, although many have not. Some new plants have emerged, and most of them have resprouted from roots or tubers. Among the species that were previously not seen during our thorough pre-burn censuses, but re-emerged from roots or tubers are bracken fern (Pteridium aquilinum), Atlantic pigeon wings (Clitoria americana), and greenbriars (Smilax auriciulata and S. rotundifolia). Several other species not previously seen were found post-fire, but they showed evidence of having above-ground vegetation pre-fire, typically a small burn stem. This suggests that some plants, while not completely subterranean during fire exclusion, had greatly reduced above-ground vegetation to the point of being practically invisible. 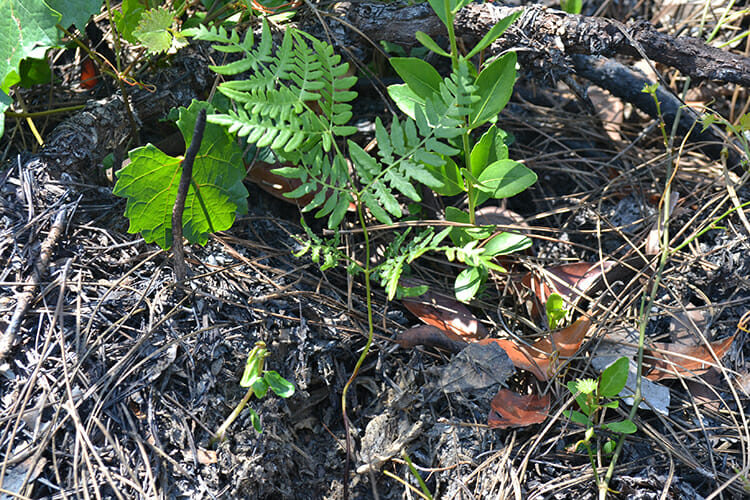 Bracken fern emerging following fire at the St. Joseph Buffer Preserve in a plot where it was not seen before the fire.

Also new to the plots were many seedlings, especially at the Weogufka site, some of which were likely in the soil before the fire, and others that may have dispersed to the site following the fire. These plants included various witchgrasses (Dichanthelium) and goldenrods (Solidago), as well as tree species including red maple (Acer rubrum), tulip poplar (Liriodendron tulipifera), sassafras (Sassafras albidum), and some oaks (Quercus). 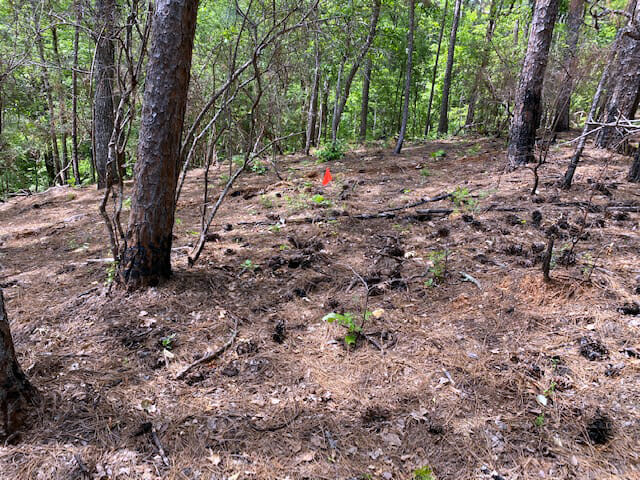 As the duff continues to be reduced toward the natural condition of exposed mineral soil, there may be more plants that emerge. In any case, we are poised to learn a great deal about pine community recovery after fire exclusion and reintroduction.