Tall Timber’s Wildland Fire Science Program is pleased to announce that Scott Pokswinski was hired this month as its lab coordinator. Scott is the current research coordinator on a $2 million Department of Defense funded project to understand the connection of fine scale fire behavior and fire effects in longleaf pine ecosystems at Eglin AFB, Florida. His will continue to manage that grant on a Joint Venture Agreement with the US Forest Service until he transitions full time to Tallahassee this summer. 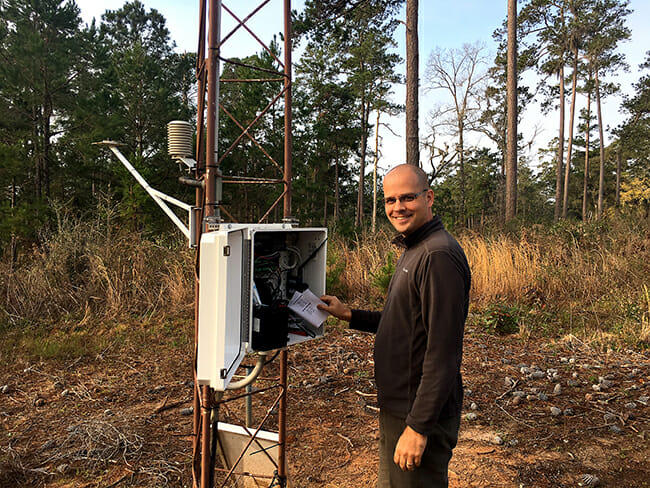 Over the last eight years, Scott Pokswinski has been managing fire related grant research at Eglin AFB. His responsibilities included collecting fire, fuels, soils, flora and fauna data in the field and assisting other researchers with the complexities of navigating access to research sites and field sampling challenges. Scott worked with a diverse range of researchers including physicists, biologists, meteorologists and foresters. He has participated in landscape fire management at Eglin and has helped to translate research to land managers through decision support models, ecological monitoring, and management workshops. He helped organize the Prescribed Fire Combustion and Atmospheric Dynamics Research Experiment (RxCADRE), which brought together more than 100 researcher from around the globe to Eglin AFB, and was featured on the Discovery Channel. Scott has a MS in Wildlife Biology; his expertise and organizational skills are critical to the advancement of the Wildland Fire Science Program.

Tall Timber’s Wildland Fire Science Program, led by Kevin Hiers, is growing steadily in 2017. In addition to Scott Pokswinki’s hiring, the program received more than $150,000 in US Forest Service and US Fish and Wildlife Service grants for 2017, as well as support from three institutions for graduate students working on aspects of fire science, fire effects, and fire management. In April, Kevin Hiers and Kevin Robertson will host the first Prescribed Fire Science Consortium burn event, which will bring in scientists from around the country to focus on how we quantify fine scale fire behavior and link heat release to ecological fire effects. A number of regional managers will be engaged in the event to help ensure management application of the group’s research.