Ecology and Management of the “Firebird”

The bobwhite quail is arguably the most ubiquitous and intensively studied game bird in North America, yet they have and continue to decline precipitously across much of its native range. Understanding the basic tenets of bobwhite ecology and management is critical to maintaining, improving, or restoring quail abundance. The daily requirements of bobwhite are the same throughout their range but the management in terms of practice and timing varies among regions, soil type and climate.

Aldo Leopold opined, the 5 tools most useful for wildlife management and conservation of wildlife include the axe, fire, plow, gun and cow. All of these management tools can be used to benefit bobwhite. However, some are more functional and useful than others, depending on the region, ecosystem, and land use history. Applying these tools at varying rates while adjusting the timing of application will facilitate achieving desired vegetation objectives. The general rule of thumb is to manage toward the Third Rule – (1) a third forbs/legumes; (2) a third native bunch grasses; and, (3) a third shrub (woody) cover. In this Southeast, this is achieved through the proper application of timber thinning (the axe) and fire management.

A conservative harvest program is important to maintaining a healthy, sustainable bobwhite population. Many years ago, early research and management lore suggested that removal of quail via the gun had minor impacts on the breeding season population. Our recent research, however, indicates that in many situations harvest combined with indirect impacts of hunting pressure is largely additive to natural mortality, lending credence to conservative harvest and hunting pressure for the conservation and management of bobwhite. As such, a conservative harvest rate of 5 – 15% should leave enough breeders to compensate for natural attrition of bobwhite throughout the year. 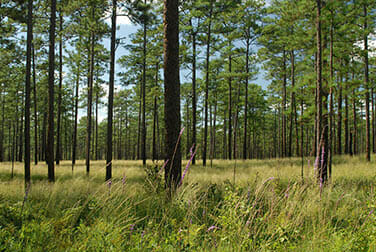 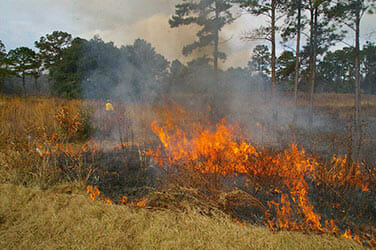 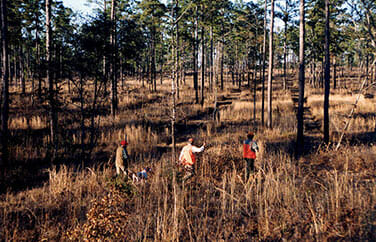 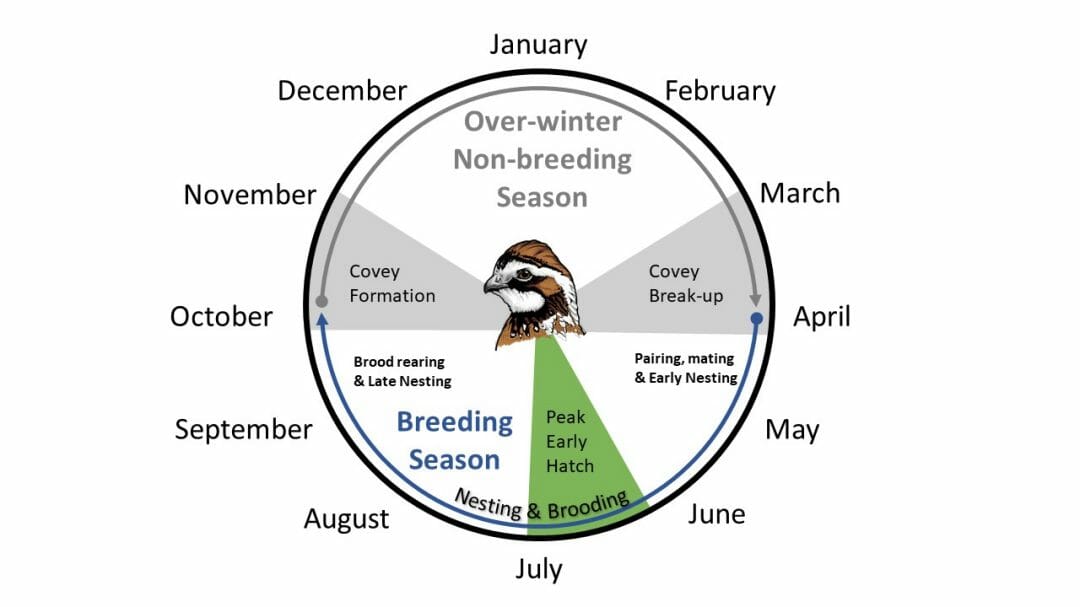 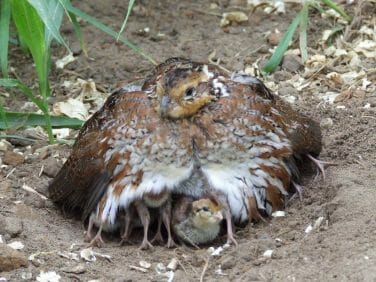 In fall and winter quail are found in highly organized social groups called coveys. The non-breeding season, also referred to as the over-winter period, begins 1 October and ends 31 March. By mid-to-late March, covey break-up begins followed by the breeding season which is typically defined as the period from 1 April through 30 September, although it is not uncommon to have nests hatch as late at early-to-mid October. Covey formation begins again in early October with covey membership and covey home range establishment, also known as the fall shuffle, lasting well into November.

Bobwhite quail have a penchant for dying with high annual mortality rates. On well managed properties, average annual survival is only about 23% for full-grown birds and when factoring in chick survival the life-expectancy of a quail is only about 6 months. High annual attrition of adult birds is compensated by high reproductive capacity and so the life of a quail goes. Thus, a managers job is to minimize predation and maximize breeding opportunity for bobwhites.

The covey unit provides distinct advantages to living alone during the winter. Our research has shown that in high density populations covey membership is a mix of largely unrelated individuals with some individuals “floating” between multiple covey groups. Over-winter survival is an important driver in population maintenance and growth such that higher overwinter survival yields a greater breeding population. Covey units provide a survival advantage as more eyes are vigilant to detect danger for the collective good of the group. In addition, living in coveys provide improved thermoregulation during cold winter nights and increased foraging opportunity. Taken collectively, covey units are especially important during late winter months because of reduction of cover, an influx of avian predators (i.e., hawk migration) and depletion or reduction in native food resources.

During the over-winter period, protective cover and escape cover is a requirement for good survival. This cover is typically woody structure found in the form of scrub-shrub vegetation such as young oak-scrub, briars and brambles, and plum thickets. In certain regions, the lack of woody structure is a major limiting factor requiring management attention.

Spring (especially mid-to-late March and April) marks the beginning of covey break-up and formation of pair bonds. By mid-April nesting building and egg-laying in underway followed by incubation beginning in May and the peak of nest incubation occurring in June. Nesting continues to wax and wane through September, with a small proportion of nests incubated in early October. Bobwhite have a complex mating strategy that includes rapid multi-clutching, renesting, double and tripe brood attempts, and male incubation.

During the breeding season, bobwhites need good nesting cover, brood rearing cover and loafing cover. Nesting cover, on most properties implementing a sound fire management program, is rarely limiting. However, good brood-rearing cover is defined differently depending on region, soil and ecosystem type, can be quite limiting. Good brood rearing cover provides protection from direct sun and avian predators, yet is open at ground level (bare ground) to facilitate mobility of chicks, feeding and evasion of ground predators such as snakes. Annual weeds typically provide the appropriate combination of protective cover, invertebrate foraging grounds, and ease of movement for bobwhite chicks.

« Back to Game Bird Program
The mission of Tall Timbers is to foster exemplary land stewardship through research, conservation and education.