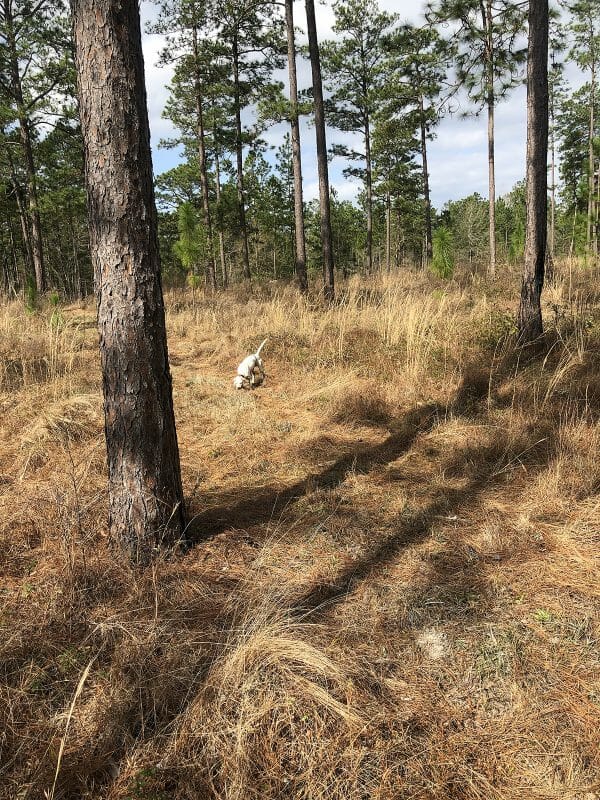 Coming off the heels of a year full of rainfall, some 25+ inches above average, the 2018-19 hunting season granted us ample cover and good hunting with premium scenting conditions right out of the gate and well through January. However, heavy rains and high winds knocked a lot of cover down early, as well as lots of trees and limbs on the ground, especially in the Albany and Bainbridge areas. This has translated to slightly below average overwinter survival in those areas hit the hardest by Hurricane Michael.

We have been hearing lots of reports of great hunting and excellent bird numbers with some places up as high as 55-60% in coveys moved per hour. We have been observing coveys frequently using “brush piles” where they are available and numerous coveys have been pointed directly in pine tops or downed trees or piles, making for some sporty wing-shooting. The wet summer and fall also filled most creek beds, drains and ephemeral wet areas, reducing many bobwhite “hideouts” and typical escape sites used to avoid hunters, making the birds more accessible and potentially increasing the opportunity to encounter them throughout the hunting season.

As the hunting seasons winds down and burning season approaches, a carefully thought out plan that leaves plenty of cover is recommended. Knocking down too much cover and burning too much can dramatically impact over-winter bobwhite survival and diminish the number of birds entering the breeding season, particularly if raptor migration stalls out on us in February, March and April, which has been known to happen. Maintaining small burn blocks (<50 acres) and staggering burns in a course to allow cover to respond before burning additional blocks is ideal. A goal is to leave 45-50% unburned area, and if timely rains permit expedient cover response following burning, then extra clean-up and burning can be conducted in April and May. Keeping these unburned areas well fed will further help to improve survival during a key pinch-point for bobwhites heading into breeding season. A carefully executed plan, with proper burn distribution, can result in as high as 65-70% of the area burned with minimal impacts on survival, but we recommend only doing this if the weather permits — it is better to be careful and cautious than to be too aggressive and risk crippling the breeding population.