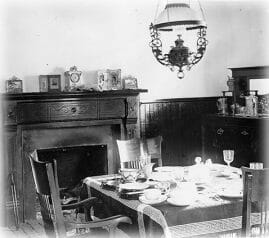 Matt Howard, Harold Odom’s grandson and his family from Jacksonville joined about 25 guests and volunteers on March 26, 2017 to dedicate the restored original Beadel House, Bradley and Hubbard light fixture to the memory of Harold. His many works as a volunteer and his boyhood love of living on Tall Timbers were an inspiration to those who worked with him at Tall Timbers. We appreciate that Matt and his family thought that the restoration of this fixture would be a loving tribute to his grandfather. We also appreciate that Matt’s children want to get old enough to be the next family volunteers at Tall Timbers. As they departed, a return trip was being planned for December.

The Odom family lived on Tall Timbers when Harold was a young boy. His father was employed by Henry Beadel as the assistant manager. During that time, Mrs. Genevieve Beadel replaced the dining room light fixture and gave this Bradley & Hubbard ceiling lamp to Harold’s mother. As a boy, Harold remembered doing his school work under this fixture. The Odom family moved during the mid-1930s and Harold’s mother eventually gave the fixture to Harold. By this time, the globe had been broken and it was packed away in the attic.

During his retirement, Harold became an active member of the volunteer history group at Tall Timbers Research Station & Land Conservancy. He loved doing tours of the Beadel House and transcribed several years of Henry Beadel’s diaries. In 2015, Harold gave the light fixture back to Tall Timbers and after his death in 2016, his eldest grandson, Matthew Howard and his family had the fixture restored in memory of Harold.

Tall Timbers and the Tallahassee Watercolor Society are proud to feature the art of William H. McKeown in the summer exhibit at the Webster Gallery. The exhibit opens June 25, 2017 with a “Meet the Artist” reception at 2:00. Bill is not only locally known, but he is a signature member of the National Watercolor Society. He was one of the first local artists to support the Webster Gallery. Not only did he contribute works for almost every show, but he has made himself available to help hang the shows and assist with the artists’ receptions. This exhibit will be up until August 13, 2017. We hope you will make plans to see Bill’s work. The gallery is open every Tuesday and Thursday afternoon between 2:00 and 4:00 p.m. For a special tour, call Juanita Whiddon at 850-566-3390.