Independent projects by Tall Timbers interns expand our knowledge base

Internships provided by Tall Timbers represent wonderful opportunities where budding wildlife biologists learn new skills and have a chance to become immersed in real-world field studies. Interns in the Vertebrate Ecology Program also are encouraged to spend a portion of their time working on independent projects that provide young minds with a chance to learn some of the basics of experimental design and data collection and analysis. In some instances, these projects also have helped to expand our knowledge base and introduced interns to the process of preparing and submitting scientific publications.

Two former interns at Tall Timbers recently submitted scientific papers based on the independent projects they pursued during their internships. Aubrey Sirman, now a senior at Florida State University, studied singing frequency in Bachman’s Sparrows in 2009 and found that most of the males heard singing in May and June were actually very lonely. Bachelor sparrows that have yet to attract females sing nearly 30-times more frequently than males that are paired at this time of year, and nearly half the males monitored in May and June typically were not paired. It makes sense for unpaired males to advertize their availability, but the results have implications for surveys based on counts of singing males and what such counts mean in terms of site suitability. Based in part on Aubrey’s data, we are developing new methods for assessing site productivity to help determine whether sites with lots of singing males also represent sites that produce lots of young sparrows.

Emily Pipher, now a second-year Masters student at the University of Manitoba, recently published a paper based on field observations that she made on the Wade Tract in 2008. While monitoring provisioning rates for color-banded males, Emily saw a Bachman’s Sparrow carrying a small lizard to its nest. She quickly snapped a picture of the bird, with the Carolina Anole hanging from its beak, and found out that this was the first instance where a North American sparrow had been observed feeding on another vertebrate. Seems these seed and insect loving birds like a little meat in their diet now and again. 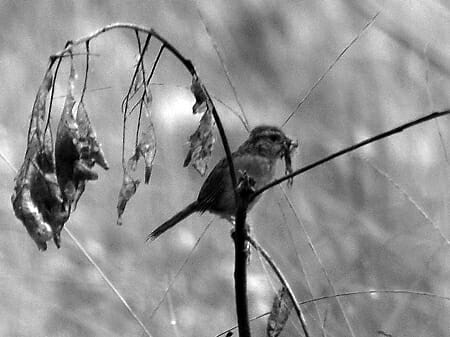 Other independent intern projects have helped to determine the detectability of brown-headed nuthatches and Bachman’s Sparrows when different survey techniques are used, as well as methods for quickly expelling flying squirrels from the cavities used by red-cockaded woodpeckers. The projects also apparently create a thirst for field research because two-thirds of recent interns in the program are now engaged in graduate studies in ornithology. If you’d like to sponsor a summer internship in 2011, contact Vann Middleton at 850.893.4154, x343 or vann@ttrs.org.