The two-story frame house at Tall Timbers, in Leon County, Florida near Tallahassee, represents an important period in Panhandle history. The house was developed and used when vast areas that had been plantations were occupied by Northerners who hunted quail.

The original section of the house was built around 1895 by Edward Beadel, a New York architect who was independently wealthy and who came south every winter to hunt. He had purchased the land from the owners of a larger estate in the Florida Red Hills, Live Oak Plantation, and had named the estate Tall Timbers.

Its second owner, Henry Beadel (Edward’s nephew), was a naturalist and philanthropist who left his entire estate to be used as an ecological research station. He was one of the pioneers in the use of fire as a land management tool for quail propagation, and also was a noted nature photographer. The upstairs rooms of the house he and his uncle Edward lived in are now used as administrative offices. The rooms in the lower part of the room have been restored with period furnishings, photos and artifacts to reflect the lives of the Beadels. Interpretive exhibits in several of the rooms provide visitors with a sense of life on a hunting plantation.

Henry had visited Leon County every winter until 1919, when he purchased Tall Timbers from his uncle Edward and became a permanent resident of Florida. The younger Beadel added a one-story, five-bay wing to the east of the older building in 1921, retaind the pleasant vernacular colonial revival style and linked the two buildings with an eighty-six-foot-long porch framed with square posts, wooden balustrade, and wisteria trellis. A three-bay dormer was constructed in the old shingled roof to add more bedroom space.

The original two-story section is a rectangular building with a gabled roof that was probably designed by Edward Beadel and built for $3,000 by a Thomasville contractor. There are four rooms on each floor, which is divided by a central hall and joined by a U-shaped staircase to the rear.

Painted yellow with white trim, like the main house, the 1921 addition has a master bedroom, bathroom, and a large living room/study. The main house was modernized when it became offices for the Research Station, although the wainscoting in its rooms and halls had been preserved. The addition has been kept as it was when Henry Beadel lived in it from 1921 to 1963. The living room/study is a museum that contains books, photographic equipment, and tools used for research and collecting by Henry Beadel. The room is paneled in brown sweet gum wood. Heavy oak beams support its twelve-foot-high ceiling. A sevenfoot-wide fireplace dominates the north wall of the thirty-sixby-forty-foot room, and mounted fish and beehives hang from the walls.

The house is set on brick piers with cinder-block infill on a slope facing Lake Iamonia, screened by live oaks and magnolias. A 1890s photo shows it with a huge front lawn, landscaped with native grasses and framed by pines and hardwood trees. Photos from early in the twentieth century show the house with a picket fence, planted flowers, a vegetable garden, and imported palm trees. Today, an open vista with minimal plantings is maintained at the house. The economy that produced the residence, first a plantation and later a hunting preserve is gone. But the house stands as a reminder of those days.

The Beadel House, at Tall Timbers is located on County Road 12 north of Tallahassee. The house is open for tours, usually on the second Sunday of each month or by special arrangement. Tours begin at 2:15. Check for upcoming tour dates. No admission is charged. For further information, call (850) 893-4153, x346.

Tall Timbers opened the Webster Art Gallery in the historic Beadel House in September 2014. The second floor gallery exhibits watercolors from the Tallahassee Area Watercolor Society (TAWS) three times each year. Henry Beadel, who bequeathed his property to establish Tall Timbers Research Station, was not only a conservationist but he was also a watercolorist, so this venue is a good match for the use of this space in his former home.

Currently, one of the gallery rooms displays a selection of the watercolor paintings by George M. Sutton commissioned for the 1958 book Georgia Birds by Thomas Burleigh. These were given to Herbert Stoddard and are part of the Stoddard Collection in the Archives at Tall Timbers. The entire collection of 35 paintings was recently exhibited. For more about Sutton and these paintings, purchase the book George M. Sutton’s Watercolors for Georgia Birds a New Look published by Tall Timbers Press.

Below is a painting by Tallahassee artist Eluster Richardson, which was commissioned for one of the interpretative exhibit panels created for the Jones Family Tenant Farm. These paintings are part of Tall Timbers permanent collection.

The Webster Art Gallery has been named in honor of Mr. and Mrs. Robert C. Webster Jr. for their many decades of service and contributions to Tall Timbers; they are recognized by a plaque that has been placed at the entrance to the second floor gallery.

The gallery is open on Tuesdays and Thursdays from 2-4 PM, and during Tall Timbers monthly open house. Click here for the open house schedule. 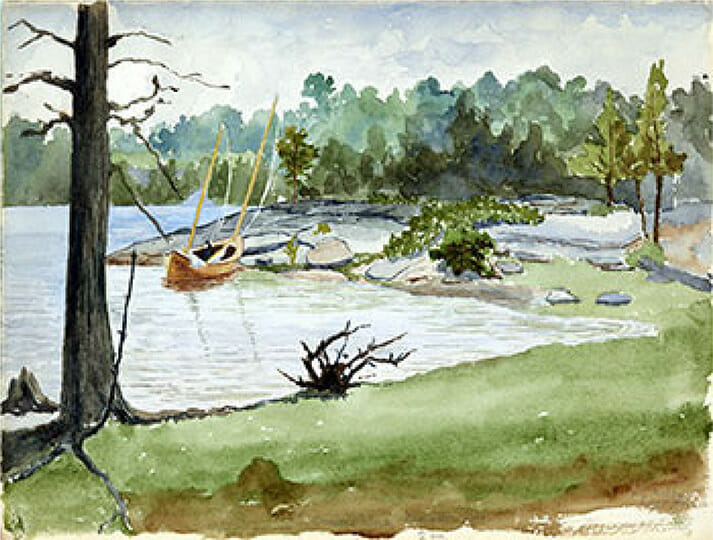 Watercolor by Henry Beadel painted in 1896 and displayed in the Beadel House parlor. 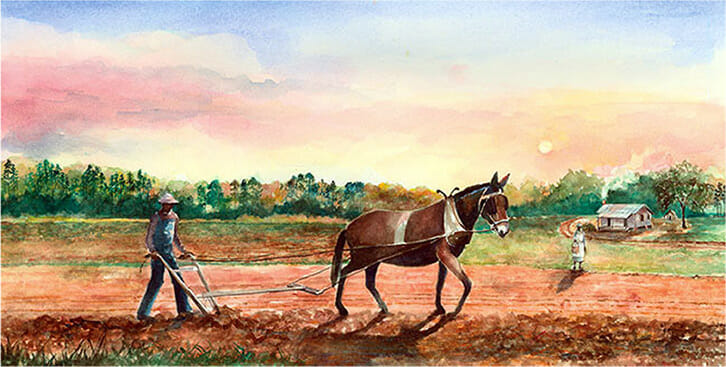 Watercolor, Plowing with Mules by Eluster Richardson was commissioned for the Jones Family Tenant Farm exhibits.
« Back to Information Resources 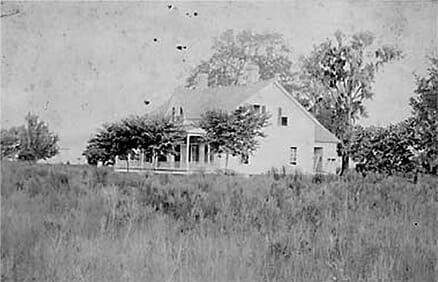 Beadel House in 1895, the year it was built by Edward Beadel. 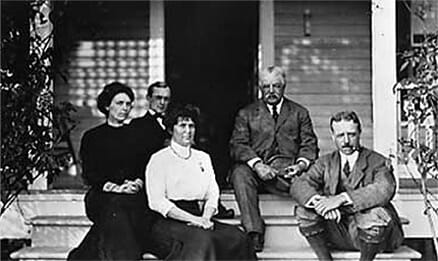 The Beadels on the front porch; center is Genevieve Beadel, at her right, Edward Beadel, and far right Henry Beadel with his ever present pipe. They are jointed by an unknown friend and their chauffeur at the left. 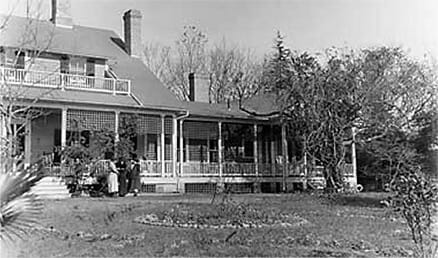 Beadel House, circa 1920s, shows the addition and a circular pool in a mowed yard. 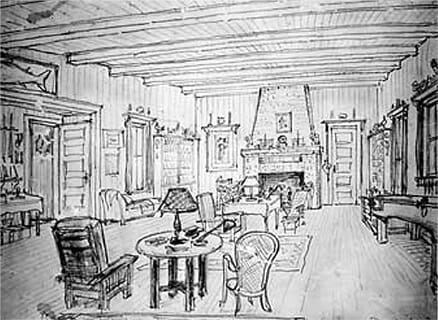 This sketch of the Beadel Room was drawn by Henry Beadel in 1923. Today the room is kept much the same as when Henry played the mandolin and Genevieve the piano to entertain friends and family. 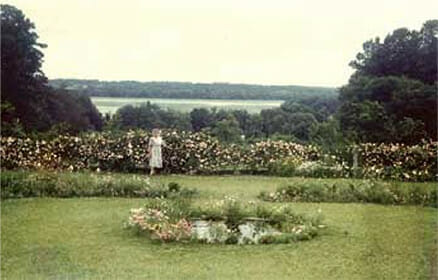 This photo shows Mrs. Genevieve Beadel in front of her garden in 1943. The view is from the Beadel House front porch, with Lake Iamonia is in the background. The pool was filled in sometime after the property became a research station. As part of the restoration of Genevieve’s front yard, the original location of the circular pool was found and a new pool installed by volunteers in early 2003. 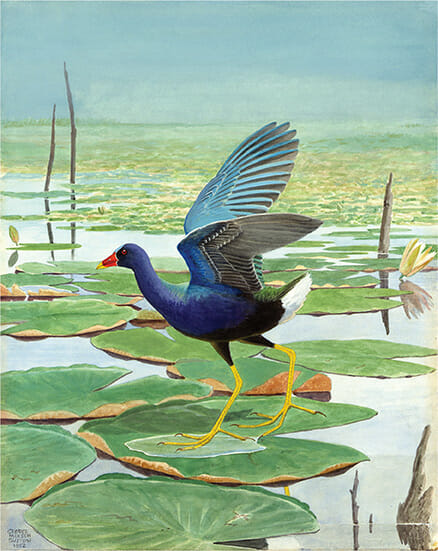 This painting of a purple gallinule by George M. Sutton is one of 35 watercolors painted for the book Georgia Birds.
The mission of Tall Timbers is to foster exemplary land stewardship through research, conservation and education.