By Ron Masters, Director of Research

Over the past decade the Research Department at Tall Timbers has focused on creating a collaborative atmosphere among the science and land management staff. We operate on a philosophy that land management on Tall Timbers is research. The difference between land management here and that practiced by some others is that of monitoring and measurement of outcomes wrapped in an experimental design. As Herbert L. Stoddard, Sr. once remarked, “land management is an art that builds on history and is based in science.”

During this time period we have pieced together some long-term data needed to illustrate where land management and research has taken us throughout our history. Period photographs prior to the 1950s from various places on Tall Timbers illustrate a landscape that varied from pine dominated forests to open woodlands interspersed with fallow fields and a ground cover dominated by broomsedge bluestem (Andropogon virginianus) and a few weedy species. 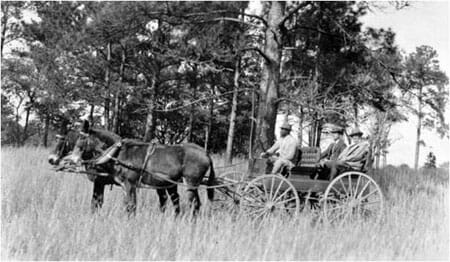 A hunting scene at Tall Timbers in 1926, shows the landscape dominated by broomsedge bluestem.

By the late 1970s and early 1980s, hardwoods had encroached and were becoming much more prevalent despite the use of frequent fire. Data from a later upland hardwood removal shows that 71.6% of the upland hardwoods on Tall Timbers became established from the 1950s through the 1970s. Very little was established prior to the 1930s and in the 1990s. The remaining hardwoods (27.5%) were somewhat equally established across the decades of the 1930s, 1940s and 1980s.

This change from woodland to forest had important ramifications on the various wildlife populations on Tall Timbers. The first to show significant decline was the red-cockaded woodpecker which, was eventually disappeared from Tall Timbers in the early 1980s. By the mid-1990s, the quail population had declined to its lowest point and the gopher tortoise populations also had declined precipitously. The Tall Timbers landscape had slowly shifted from an open park-like pine-grassland to a denser, mixed pine-hardwood forest. Based on historical aerial photography, forest canopy cover and density was at its highest point post-civil war.

So what allowed this shift? A gradual change in burning regime and a couple of major weather events precipitated the movement from open woodland to dense forest. In 1971 a tornado touched down on Tall Timbers knocking down many huge loblolly pines over a broad area. Small diameter hardwoods were present across the property and began to inch into the mid-story. Twenty-five percent of the hardwoods later removed were established in this decade alone. In 1985 Hurricane Kate forcibly made more dramatic changes in the composition of dominant canopy trees across the property. This dervish knocked down many more large pines in areas of the property, particularly on the southern part, and evidently furthered the development of a mid-story hardwood component in that area.

The scientific thought of the 1970s and 1980s focused on growing season burns as the more “ecologically appropriate” season of burn. Some supporting scientific evidence suggested that indeed early growing season fire was more effective at controlling woody re-sprouts than dormant season fire. But that was in native vegetation types. The science of that time had not yet documented the differences between native fuels and old field fuels. Native fuels were very different than old field fuels and burned with higher intensity. Old field fuels were forb and woody dominated with a comparatively small grass component. The dominant forb component was less effective at carrying fire during the growing season than grass dominated fuels of native ground cover. Thus hardwoods began encroaching and as hardwoods encroached hardwood leaf litter became a dominant fuel type in many scattered areas and was less flammable. The compounded effect was lower fire intensity. Tall Timbers was dominated by old field vegetation. Thus we theorize that the hardwood component continued to develop and increase during this time.

Following discussions between research and land management in the mid to late 1990s, momentum was established to halt the hardwood encroachment on Tall Timbers and restore the open pinelands (Figures 1). A hardwood thinning was conducted beginning in 1997 and a follow-up thinning with pine and hardwood removal conducted in 2007 (Figures 2). During the interim, the focus by land management on burning shifted away from growing season to transition season (between dormant and growing season) burning and burning only under conditions of low humidity and low fuel moisture. 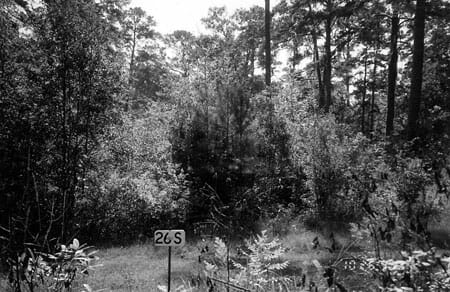 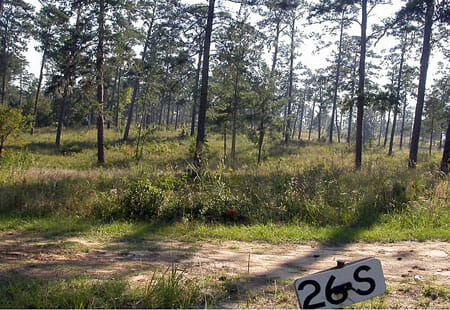 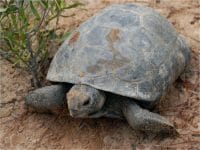 As the results have unfolded, we have seen quail populations with the highest numbers ever, the gopher tortoise has doubled in population size and the red-cockaded woodpecker has been re-introduced and is reproducing well. Mr. Stoddard was right after all, land management is indeed an art, but must carefully examine and build upon history, then finally must be put to the test with a scientific perspective. The proof is in the results.