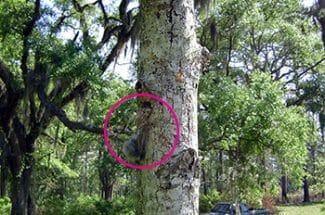 Stiff competition for limited resources can lead to elevated tension. Human societies try to deal with such tension using diplomacy and negotiation before advancing to more aggressive responses. Wildlife societies, on the other hand, often go straight for the jugular.

On-going studies of the Brown-headed Nuthatch on Tall Timbers have revealed some startlingly aggressive attacks launched by this 11 gram songbird (just a tad heftier than a ball point pen). This declining species excavates a new nest cavity each year in dead wood, and these cavities represent an important resource that often draws the attention of cavity nesting species such as Eastern Bluebird and Carolina Chickadee. A lot of overt aggression takes place around nuthatch excavations, as the nuthatches doing the work try to defend the resource from the other birds. 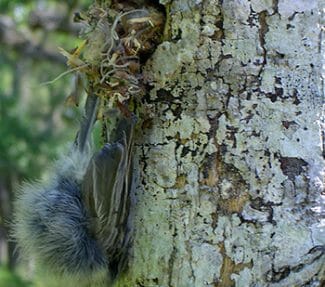 In 2007, we found a Carolina Chickadee suspended from a nuthatch nest cavity. The chickadee’s feet were tangled in the moss used to line the nest, and the motionless body swayed back and forth in a light breeze. We found numerous small peck marks on the back of the head, some of them deep enough to penetrate the skull.

We were never sure happened, but we long suspected a nuthatch or some other sharp-beaked bird had used its bill as a foil and steadily beat the chickadee senseless. This year, however, additional observations suggest the chickadee could easily have been murdered by the stiletto beak of a brown-headed nuthatch.

There are generally more nuthatches around each year than there is space to accommodate them, leading to another source of resource competition. Given the excess in numbers, some males and females lend help to other nuthatch breeders, rather than nest on their own, but we also observe “floaters” each year that are not aligned with specific territories. These birds tend to move unobtrusively among several neighboring territories not calling attention to themselves. 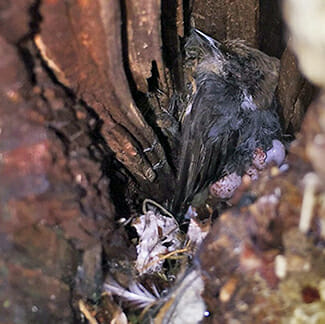 Last breeding season, Tall Timbers intern Amanda Lanphere tagged along on a morning of nuthatch monitoring. When we came to nest SA2, Amanda asked to check the nest and was warned that this female often held tight, and not to be alarmed if she was sitting on the eggs. When Amanda peered into the nest using a small flashlight, she calmly announced, “She’s sitting really tight. She’s had her head pecked in.”

We extracted the female using forceps, but, to our surprise, it was not the dominant female associated with the nest (who was banded). It was an unbanded female with massive head trauma. The wounds were similar to those seen on the chickadee, and we suspect this female had just dumped an egg in the nest and was caught in the act by the dominant female—leading to a lethal response.

Finally, we nearly lost an important piece of equipment this year thanks to another dose of nuthatch aggression. FSU Ph.D. candidate Jess Cusick uses a stuffed House Wren model to gauge the aggressive tendencies of marked nuthatches. The model is placed on the side of an active nesting cavity, and Jess scores the extent to which the model is attacked. Last spring, one marked male landed on the wren model and pummeled it relentlessly until the wren’s head was nearly severed.

Although fear of defeat or punishment often inhibits aggressive responses among animals, obviously you can push a small nuthatch only so far.