Update on planning and advocacy issues

Nestlé abandons plans to use Wacissa River for bottling

In an issue that had as many twists and turns as the Wacissa River itself, Nestlé Waters North America announced on July 27, 2011 they would no longer pursue using the Wacissa River as a water source for commercial bottling. In a press release, Nestlé Natural Resource Manager Kent Koptiuch said “After a thorough review of the data, we have determined that while the Wacissa River springs complex continues to produce an abundant 200 million gallons of water per day or more, Allen Spring is naturally subject to seasonal low flows that do not meet our strict selection criteria for a stable, sustainable water supply." 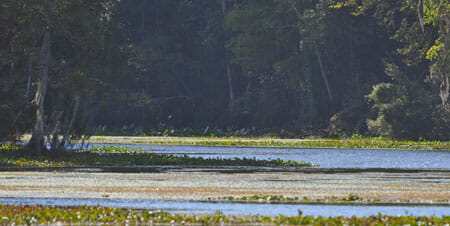 This decision follows closely on the heels of Jefferson County developing an Aquifer Protection Ordinance which would require a super-majority vote of the Board of County Commissioners to approve any development associated with or related to the production of bottled water.

On July 21, Jefferson County was scheduled to hold a public hearing to gather input on the proposed Aquifer Protection Ordinance. That hearing was cancelled at the last minute at the request of the Suwannee River Water Management District to allow additional time to ensure the ordinance did not conflict with District authority to regulate water use.

Nestlé’s interest in using the Wacissa River to supplement its commercial bottling operation in Madison County sparked the creation of the Friends of the Wacissa, a diverse group who vocally opposed this proposal. Tall Timbers also had concerns about Nestlé’s proposal. These included the potential impact of water withdrawals on the ecology of the river and on the people who are dependent on the river for recreation and subsistence. Also of concern was the potential impact to the rural character of the Wacissa community from excessive truck traffic associated with transporting water from the Wacissa River to Madison County. Tall Timbers was also uneasy about setting a precedent within the Red Hills of approving the commercial use of a public resource like the Wacissa River for private benefit.

Nestlé has said they have no plans to explore other sites in Jefferson County but will focus on other areas in north Florida. Given the importance of water resources, increasing demand, and the relative abundance of water in the Red Hills, this will not be the last challenge facing our rivers, springs, and aquifer.

The Leon County Board of Commissioners is considering revising the county’s animal control ordinance, and that has a number of individuals and organizations worried. In fact, the outpouring of concern resulted in Commissioners cancelling a public hearing early in July 2011, after many potentially affected parties objected to what they believed was inadequate notice to review and respond to proposed code changes.

There are several areas of concern to kennel owners, dog trainers, and foster families for abandoned dogs and cats. One proposed change would limit the number of dogs and cats based on the size of a parcel on which a kennel is located. Though not a problem for many in the Red Hills, this could be an issue if a kennel was located on small out-parcels (less than 5-acres) surrounded by larger properties. Another proposed change would prohibit dogs from running loose on private roads. A strict interpretation of this proposed change could potentially limit the use of hunting dogs on private land. Another concern has been raised in regard to a new definition of “proper shelter” for outdoor dogs. The new definition requires structures to be “sufficiently insulated.” Depending upon how “sufficiently insulated” is defined, this could directly affect Red Hills landowners.

Tall Timbers LandConservancy staff will be contacting potentially affected landowners in the Red Hills to make them aware of proposed changes to the Animal Control Ordinance. Planning staff will contact Leon County Commissioners to inform them of the concerns noted above and will attend and provide comments on this issue at the next public hearing on August 23, 2011 at the Leon County Courthouse.

Valuation of Ecosystem Services is a multi-year project with the University of Georgia to estimate the economic value of ecosystem services in the Red Hills. What are ecosystem services? Ecosystem services are natural processes provided by forests and wetlands that provide irreplaceable services such as water recharge, water filtration, flood control, pollination, and habitat, among others.

Results from the Red Hills project are expected in August 2011, and will be presented in a publication, which will be finished by the end of 2011. The results from this study will be used to educate decision-makers about the ecological and economic importance of the Red Hills region. The study will also provide an opportunity to communicate to landowners about additional potential sources of revenue to help maintain Red Hills’ rural landscapes.