How a multiple-century-old longleaf pine tree gets its start in a frequently burned pineland has been subject of debate since the beginning of longleaf research. It has long been observed that longleaf pine juveniles (between the “grass stage” near the ground to about head-high) tend to become established in dense clusters limited to open areas away from canopy trees. In the traditional model of forest regeneration, one or a few trees die and create a gap in the otherwise continuous canopy, letting in enough light for new seedlings to become established and grow.  However, longleaf communities are better described as savannas than forests, where even under mature longleaf pines only about 50% of the sky is covered, so that light is hardly limiting.  Other variables thought to drive this pattern include root competition from canopy trees, higher soil moisture and nutrients in gaps, pine needle mulching, fire severity associated with pine needle litter, and, in sandhill communities, facilitation by young broadleaf trees such as turkey oak. 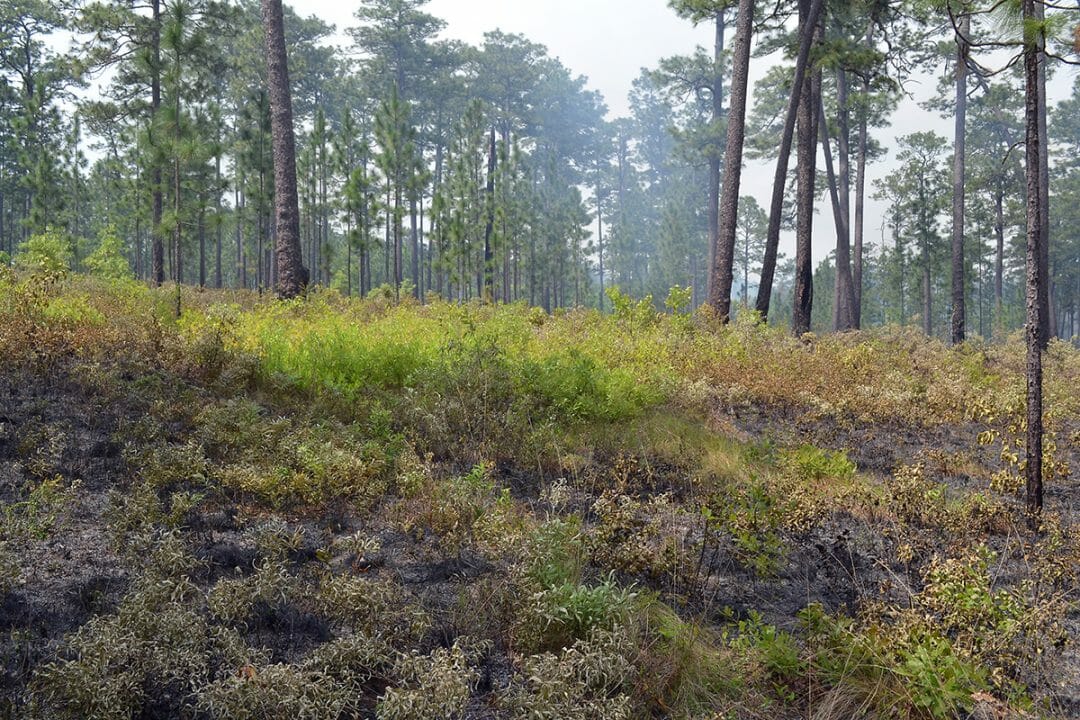 Unburned patch in a gap following a burn on the Wade Tract, with an cluster of longleaf pine that became established about 20 years earlier in the background.

During the summer of 2018, Yale School of Forestry graduate student Charlie Faires worked with the Fire Ecology Program to test the idea that dense clusters of longleaf pine regeneration are primarily shaped by small areas that are unburned during fires, which are almost always within gaps. Since 2005, we have been mapping unburned patches following prescribed fires on the Wade Tract old-growth longleaf pine preserve near Thomasville, Georgia, and Dr. William Platt of L.S.U. has been mapping and measuring the trees since 1978. Charlie mapped the location of longleaf juveniles to see if they match up with unburned areas. We also analyzed the likelihood of longleaf juveniles being in an open gap versus under tree canopy, in the inner portion of gaps (more than 8 meters from the edge of a tree crown), or in an area where a canopy tree had died during the last few decades, where longleaf is often observed to become established. 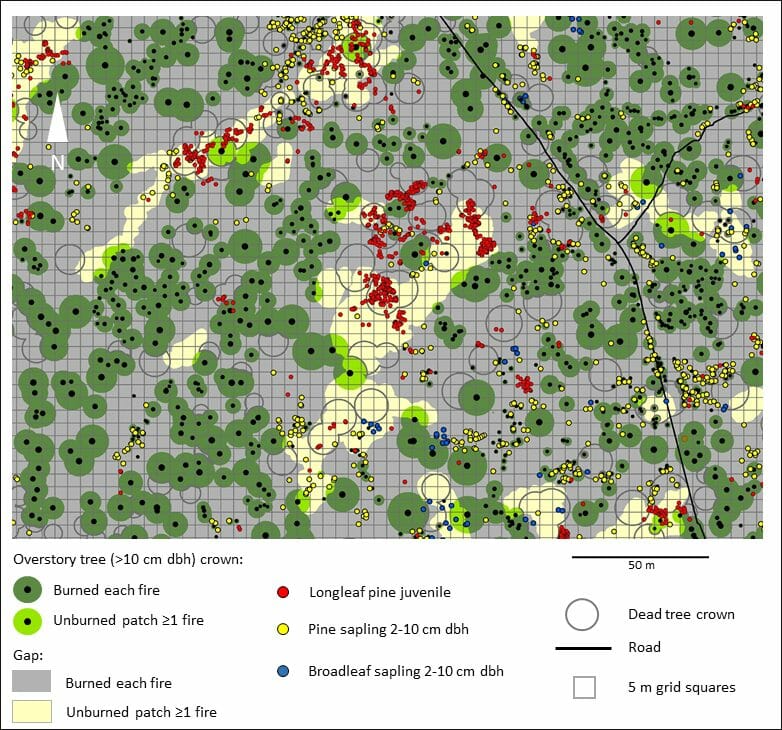 Portion of the Wade Tract showing tendency for juveniles to be located in gaps within patches that were unburned during at least one fire from 2005-2018 and within the previous crown area of large pine trees that died (dead tree crown).

Our results showed that longleaf pine juveniles were much more likely to be in unburned patches than in other areas. It also showed that gaps, especially inner gaps, and areas where a mature tree died further increased the likelihood of there being longleaf juveniles. For example, longleaf juvenile density was 13 per hectare in areas under tree canopies that burned in each fire since 2005, compared to 415 in inner gaps where a mature tree had died, and at least one fire was missed. We interpret these combined effects through the lens of mediation of fire severity. Gaps, especially inner gaps, have lower pine needle fuel loads and are more likely to have patches that are unburned or else burned with lower severity. When canopy trees are alive, they reduce the amount of grass and woody plants beneath them by depositing heavy pine needle loads that can damage plants when they burn. When the tree dies, it leaves an area with reduced vegetation and very little pine needle litter, reducing both competition and fire severity, perfect for longleaf pine establishment. Saplings of broadleaf trees also came up in unburned patches, but they tended to be in different parts of the patches than longleaf. As the longleaf pines grow, they will probably reduce the young broadleaf trees by dropping abundant pine needles and increasing the fire severity again. This process provides a feedback mechanism by which regeneration of longleaf pines and broadleaf trees is limited beneath the canopies of longleaf, but encouraged in open areas, maintaining the savanna structure (co-existence of trees and grasses) characterizing the longleaf pine ecosystem. This model has implications for fire management for longleaf pine regeneration, suggesting that burning under conditions that allow for some patchiness following longleaf mast years (abundant seed production) is important for natural recruitment.

Results of the study are being submitted for publication to a special issue on longleaf pine in the journal Forests. The study will provide an important baseline of longleaf juvenile data for continued monitoring in the future, to further understand the role of fire in maintaining populations of this very long-lived species.