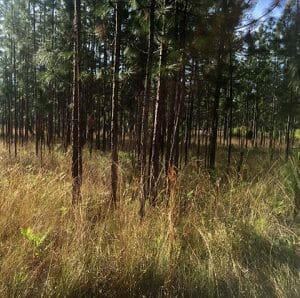 The Wade Tract old-growth longleaf pine preserve is well known for the amazing ages of its trees, but what is not known is how the age of trees affects the rest of the ecosystem. Longleaf pine typically regenerates in tight clusters of trees within gaps in the forest where the canopy is completely open. The lack of pine needle fuel either excludes fire or reduces its intensity in the gaps, which is apparently what allows the seedlings to survive there following mast years, that is, when seeds are produced in great quantities about every 7-10 years. These clusters remain recognizable until they are a couple of centuries old, while they prevent further longleaf regeneration beneath them. Then they eventually they break up as trees die one by one, mostly from lightning strikes.

Masters student Maria Paula Mugnani from the University of Florida Department of Wildlife Ecology and Conservation is testing the question — Does the plant community within these longleaf pine regeneration clusters change predictably with the age of the cluster? With help from tree increment bore data that Dr. William Platt and Dr. Steve Rathbun collected in the 1980s, and the repeatedly measured map of all trees within 60 hectares of the Wade Tract that Dr. Platt initiated in 1978, Maria Paula was able to place clusters in six different age classes, including gaps, ranging up to 250 years old. 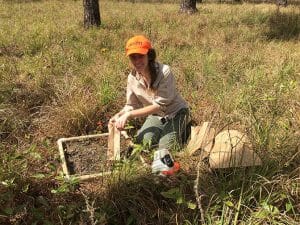 Maria Paula will begin the plant census this summer, but in the meantime, she and the Fire Ecology lab are measuring several variables that might help explain any patterns in the plant community. Prior to burns on the east and west units of the Wade Tract in March and April, we measured different categories of plant material that could provide fuel for fires, then measured residual plant material after burns to estimate fuel consumed and energy released. Results confirm that the least heat is released in the gaps, and the most heat is released in the intermediate age classes (about 50-130 years old). Such fire effects, as well as mulching by pine needles, may influence which plants survive at a given time in the longleaf life cycle. Other measurements will include broadleaf woody plant abundance, herbaceous plant productivity, light, and soil chemistry. There is no guarantee that there will be strong patterns in plant species associated with the age of clusters, but if there is, it will be an important discovery of how the life cycle of these iconic trees control their entire ecosystem.