Population reintroductions are increasingly important for managing rare wildlife. Habitat loss and fragmentation will only increase over the coming decades, meaning that space for wildlife will increasingly be smaller and dissected more frequently by roads, urbanization, and unsuitable habitats. These changes especially pose threats to species that need large areas to survive or have specialized habitat needs. 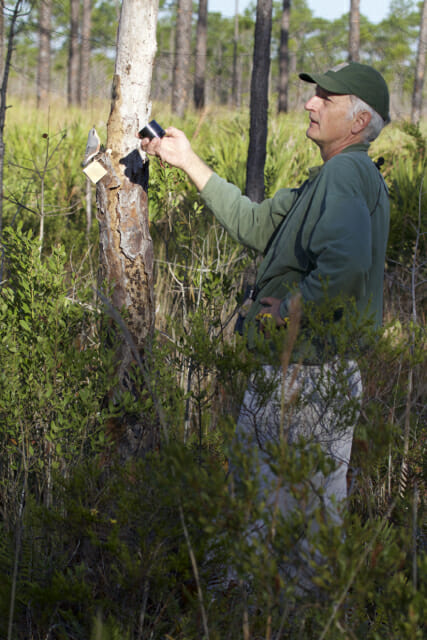 Jim Cox uses a recording of a Brown-headed Nuthatch call to lure birds to catch in the mist net set up nearby. Photo by William Eaton

Population reintroductions also regularly provide new information on the species involved, as some of our recent work has shown. The Stoddard Bird Lab collaborated with Gary Slater (Center for Natural Lands Management, Washington) to look at the development of cooperative breeding in two reintroduced populations of the Brown-headed Nuthatch. Cooperation in the nuthatch occurs when adult males decide to forego their chances to breed and instead assist in the breeding efforts of another male and his partner.

It’s an unusual type of behavior (found in <5% of all songbirds), and previous work with a bird that breeds cooperatively suggested cooperation occurred only after the available habitat on the reintroduction site had become saturated. Before that time, the excess breeders moved into a surrounding landscape devoid of other males to set up territories and attempt to secure mates, rather than assist in the breeding efforts of others.

Gary reintroduced nuthatches to the Everglades National Park in the late 1990s and monitored the growth of the population for five years. More recently, we reintroduced nuthatches to Jonathan Dickinson State Park and have monitored birds there for two breeding seasons. In both cases, cooperation occurred in the first couple of breeding seasons following the initial releases, well before the available habitat (over 9,000 acres on both sites) was saturated.

The results provide novel support for factors other than lack of space in driving cooperative behavior. Rather than habitat saturation, factors such as the number of males and females available appear to play a bigger role. When there is an excess of males, some males elect to help others rather than set up and defend a lonely territory.

Our work on Jonathan Dickinson has also yielded other novelties. The Brown-headed Nuthatch is thought to be a sedentary species that sets up shop in a small area (about 10-15 acres), and then spends the rest of its life in the general vicinity. Some of the individuals we’ve monitored on Tall Timbers have not moved more than 300 yards in the 10 years they’ve been alive! In contrast, we’ve seen some drastic movements in the first two breeding seasons in our reintroduced population. The two nesting pairs we had the first year post reintroduction have moved over a mile to new nesting locations in 2020. There were no other territorial nuthatches on the park back in 2019, and the lack of neighbors allowed the birds to roam over several hundred acres (not the more typical 15 acres). The changes point to the role that neighbors might have when most individuals in a population try to find breeding habitat, not simply physical features such as food resources and the maturity of pines.. 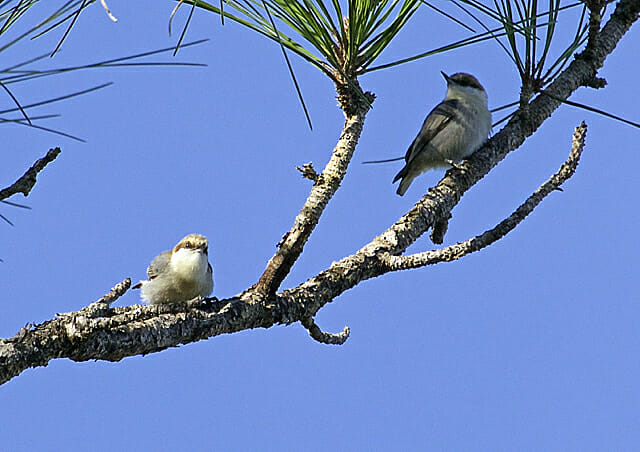 A nesting pair of nuthatches reintroduced to Jonathan Dickinson State Park in 2019 that has moved over a mile to a new nesting location in 2020. Photo by William Eaton

This work also has important conservation implications, in addition to some of the theoretical elements discussed above. The nuthatch has disappeared from many areas in south Florida, including several large (5000+ acres) tracts of public land. The populations remaining in south Florida have lowered genetic diversity, which may be a product of the inability for individuals to move regularly among increasingly isolated patches. Tools like reintroduction and translocation are likely to be increasingly needed to combat these threats, as habitat loss and climate change continue to alter the existing landscape. 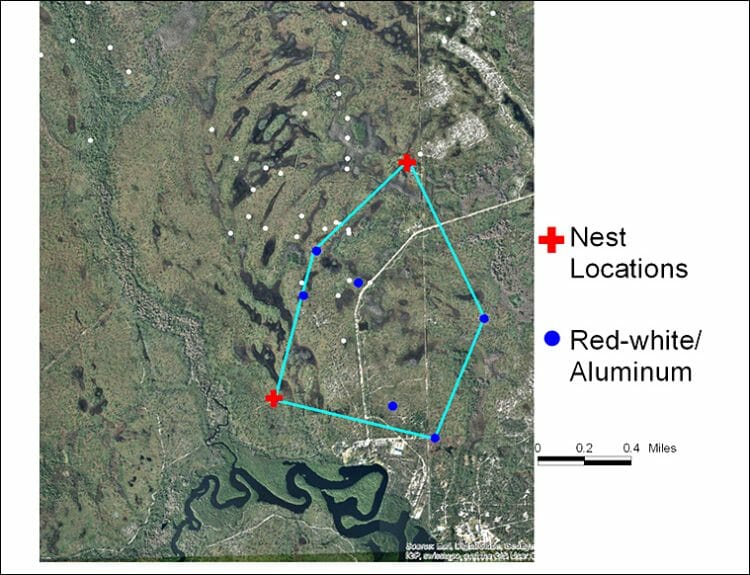 Movements of a male color-marked nuthatch reintroduced to Jonathan Dickinson State Park in 2018. The area extends over nearly 200 acres, 10x the normal area used. Red crosses show nesting locations for this male and his mate in 2019 (northern most) and 2020 (southwest).