Prescribed fire and air quality – getting the right numbers

Inventories of PM produced by burning are built from estimates of area burned, amount of fuel consumed, and an "emission factor" used to calculate amount of PM released per biomass burned or carbon dioxide (CO2) released. The emission factor has traditionally been calculated by measuring PM and CO2 in the air before and during burning to estimate the amounts released and then taking the ratio of the two amounts. However, there are reasons to believe that the air measured during burns does not have all of the pre-fire CO2, which would skew the calculations. The implications of such error for accurately inventorying PM emitted from prescribed fires and advising air quality policy could be widespread.

In collaboration with Dr. Y. Ping Hsieh and Dr. Glynnis Bugna of Florida A&M University, the Fire Ecology Program has acquired a National Science Foundation grant to improve estimates of emission factors in southeastern U.S. natural communities. The new approach involves using carbon isotope analysis to directly measure how much of the CO2 is actually emitted from the fire, thus improving the emission factor and PM estimates. Research is under way and early results are promising. We plan to share the results with state and federal air quality regulators and public land managers in workshops held in Tallahassee, Florida and Atlanta, Georgia. 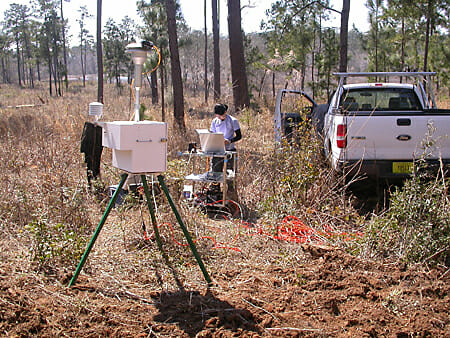 Above, Dr. Bugna preparing the air sampler to collect particulate matter and carbon dioxide from a prescribed burn on Tall Timbers Research Station and Land Conservancy.