Diamonds in the Rough: Natural History of the Eastern Diamondback Rattlesnake 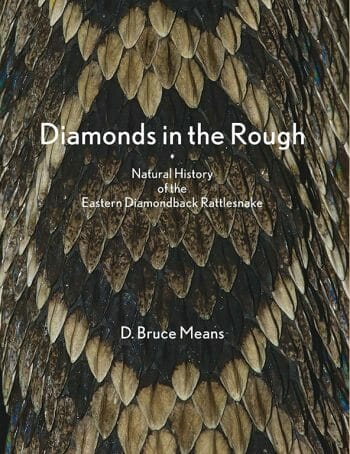 This book is the monograph of the eastern diamondback rattlesnake by D. Bruce Means. Its publication is a culmination of over 40 years of long-term, in-depth study of the world’s largest rattlesnake, Crotalus adamanteus. In the preface Means writes, “The limited biological knowledge available for this species is all the more amazing when one considers the economic impact of Crotalus adamanteus. Because of its large size and highly toxic venom, it is arguably the most dangerous venomous snake in the United States and Canada, accounting for more human mortality than any other species (Klauber 1972; Parrish 1980). Its ecological importance may be even more significant, however. The eastern diamondback is a major predator of the cotton rat (Sigmodon hispidus), a significant crop pest that is probably the most abundant rodent in the southeastern United States (Lowery 1974). Moreover, the eastern diamondback, which weighs up to about thirteen pounds (5.9 kilograms), is the largest cold-blooded terrestrial vertebrate living in the temperate zones of the earth (Means 1985).”

This book sets forth some of the major aspects of the life history and ecology of Crotalus adamanteus based on three major sources of information: 1) a large sample (n = 776) of carcasses that I and my assistants dissected from north Florida and south Georgia; 2) field studies I conducted over a 38-year period in eastern panhandle Florida and south Georgia; and 3) the scientific literature that existed through 2014. The most important component of the field studies involved a mark-recapture and radiotelemetry investigation of a free-ranging population carried out from 1976 to 1984 on Tall Timbers Research Station near Tallahassee, Leon County, and Alligator Point, Franklin County, Florida. A second study was conducted on the population on Little Saint Simons Island near Brunswick, Glynn County, Georgia, off and on from 1990 to 1997. Data and information from other important trapping and radiotelemetry studies are also cited (Timmerman 1995; Waldron et al. 2006, 2008, 2013a, 2013b; Steen et al. 2007, 2012, 2013, 2014; Hoss et al. 2010).

About the Author
Bruce Means is the president and executive director of the Coastal Plains Institute and Land Conservancy. He is a courtesy professor of biological science at Florida State University, where he has taught courses on the ecology of upland, wetland, and coastal environments of the southeastern U. S. While a graduate student, his studies were supported from 1969–1975, by a Gerald Beadel Fellowship from Tall Timbers Research Station; Means later became director of the research station from 1978–1984. It was during this time that his long-term, in-depth study of the eastern diamondback rattlesnake began. 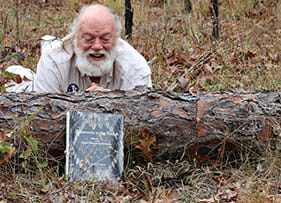 If you have a $20 voucher from Bruce Means, because you contributed money to his effort to complete Diamonds in the Rough, please call Lisa Baggett at Tall Timbers to place your order: 850.893.4153, x241 or email her at lisa@talltimbers.org