Quail carry-over, adults as nesters and burning for 2012

Thus far our carry-over of quail has remained promising for the 2012 hatch, with 81% of radio-tagged birds remaining alive since November 1 on Tall Timbers and similar survival rate in Albany. This is excellent carry-over to date, but February and March are often the worst months for avian predation on quail, so we are not out of the woods yet. The forecast continues to predict drier and warmer weather through this period, which should help quail survival by keeping their main predators further north. Thus far this year, we are not seeing normal numbers of migratory flocking birds (blackbirds, robins, waxwings) as usual perhaps a result of warmer weather and low snow coverage in the Midwest and Eastern U.S. A good carry-over of bobwhite is critical if we are to remain stable or increase in 2012.

Some plantations are reporting higher than normal adult quail in their fall population. Previous research has indicated that productivity of adult and juvenile quail did not differ but our long-term studies indicate that adults are more productive nesters than juveniles and especially more so in some years (Figure 1). In 2000, 2004, 2006, and 2008 adult bobwhites were significantly more productive than juveniles, and three of these four years began an upswing in bobwhite numbers. During these years, adults produced 1.7-times the nests as juveniles. We believe much of this is due to adults starting nesting earlier in the year than juveniles, which adds time for renesting over the course of a nesting season. With a larger than normal proportion of our hatch coming from a late hatch, we may see adult bobwhites producing more nests in 2012 than juveniles; many juveniles will be 7 to 8 months old when nesting season begins. It is also interesting that in years with a strong May-June hatch our quail populations tend to increase. Previous studies in Tennessee indicated that the number of nests built by quail was the best indicator of summer population gain. The take home point is that while it is almost always a good sign to have a high juvenile to adult ratio in your fall population, our data suggests having a large proportion of adults may bode well for nest production the following year and help to increase populations. 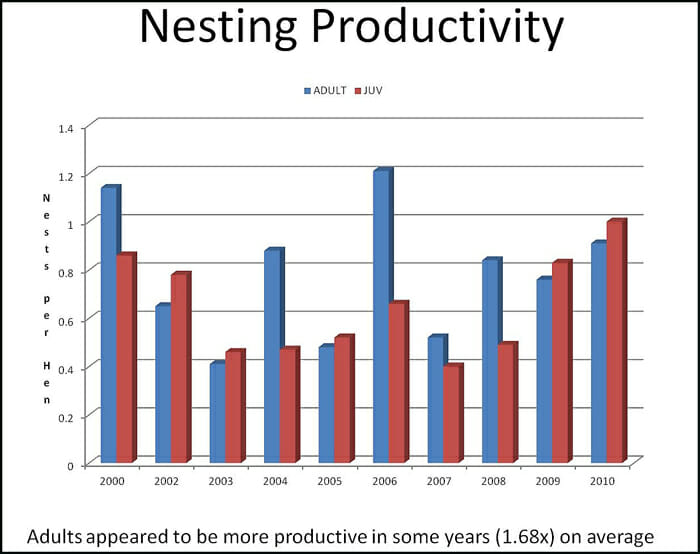 The continued drought remains a concern for burning and habitat management this coming year. The main trade-off is maintaining adequate cover to get the quail through the avian predation threats in March (and get an advantage of our good carry-over of quail thus far), while getting the burning done before a potential burn ban occurs due to wild fires or severe drought. We are recommending burning conservatively (50% of uplands) and burning early in March and perhaps even some in February. If adequate rainfall occurs in February through April, then managers have the option to burn more acreage later in the season. This may apply more to areas with higher soil fertility or dense native ground cover, where the habitat can become rank rather than sandier sites. Last year, earlier burns benefited from moisture during March and provided better cover during the growing season than later burns, which were hampered by the drought in May and June. With a severe drought again in the forecast, we cannot bank on an early hatch. Therefore, maintaining quail survival is the key to sustaining populations; because if May and June are hot and dry, we will again depend on a later hatch for the 2012 hunting season. Keeping more of your quail alive until August may make a big difference next year, and how you burn this spring may very well be the most important management decision. There again, we can always hope that the drought may end!