The net population trend in the Red Hills last year (2015|16 hunting season) was relatively flat-lined with wide ranging variation throughout the region such that bobwhite abundance was up or down by as much as 30%. Based on early reports from managers combined with covey call counts on numerous properties and radio-telemetry work in the region, we suspect a similar story this hunting season, but for different reasons.

Overall production this year was lower than last year, but male incubation rates were much higher (22% of all males radio-tagged incubated a nest this breeding season) and brood production remained above the long-term average. However, bobwhite carryover was good going into the breeding season and hens were in good condition due to a relatively mild winter. Clutch sizes were 2 to 3 eggs larger compared to long-term averages. Chick survival was also nearly 2x better this year compared to last year, a purported boon to fall recruitment. This has been corroborated by observations of large covey sizes and mixed ages/sizes of birds reported by several managers and dog handlers. A welcomed late hatch was evident but was not as strong compared to banner years of the past – low adult survival during the breeding season resulted in fewer hens making it in August/September and pulling of a last successful clutch. Taken collectively, 2016 was an average reproductive effort. As such, we expect that bobwhite numbers will be similar to last year’s or slightly off from last year, depending on localized conditions, but given more consistent production and improved chick survival throughout the region we expect bobwhite trajectories from property to property to be less variable (±15% from stable). 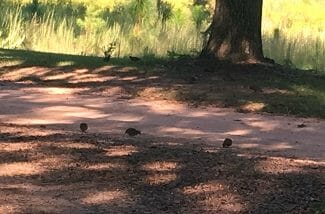 Native food availability may impact covey behavior and foraging activity during early hunting season. For example, we have observed several coveys feeding on the ample acorn mast produced by live oaks and water oaks over the past couple of weeks. Thus, covey fidelity to the feedline may be lower and/or less intense to start the 2016|17 hunting season. And, dry weather will yield challenging hunting conditions for many during opening weekend of quail season here in the Red Hills. Hunting early to capitalize on moisture from morning dews may help hunting success during these dry periods.