Originally published in the 2021 Quail Call

Long-term data sets are the bread and butter of the Tall Timbers Game Bird Program. Our long-term data sets for radio-tagged quail from the Red Hills, Albany and now Central Florida allow us to monitor different bobwhite populations and how they function. However, we often find ourselves lost in the numbers without focusing on the bigger picture. One major takeaway from looking at these data is that not all high density and stable populations are created in the same way. There has been an ongoing debate among quail biologists in recent years about which demographic is most important: adult survival, reproductive output, male contribution to re-production, or brood survival. We believe the answer is all of the above, and that it can vary from place to place, and even year to year on the same place.

In the Red Hills region of north Florida and south Georgia, overwinter survival on our two study areas (Tall Timbers & Livingston Place) has averaged about 45% since 2014, com-pared to 62% in Albany and 58% on Escape Ranch in Central Florida within the same time period (Figure 1a, b, c, d). 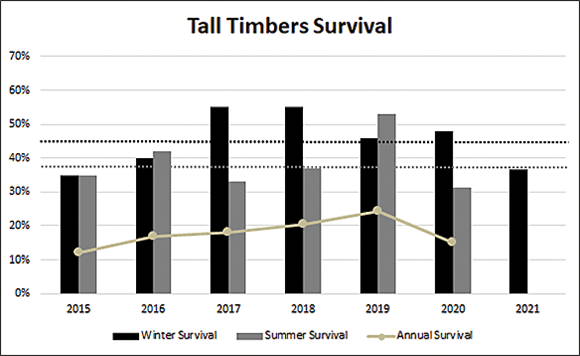 1a. Seasonal and Annual Survival of radio-tagged quail on Tall Timbers near Tallahassee, FL from 2015–2021 compared to the average for the same time period. 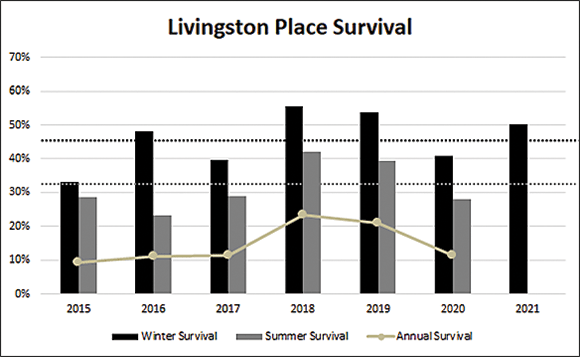 1b. Seasonal and Annual survival of radio-tagged quail on Livingston Place near Monticello, FL from 2015–2021 compared to the average for the same time period. 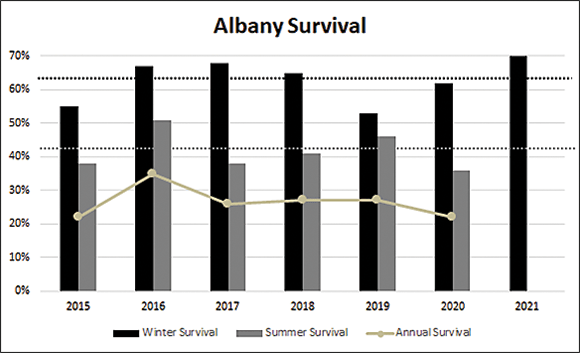 1c. Seasonal and Annual survival in Albany, Ga from 2015-2021 compared to the average for the same time period. 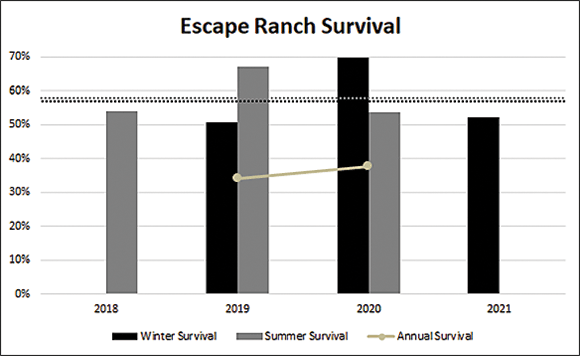 1d. Seasonal and Annual survival on Escape Ranch from 2018-2021 compared to the average for the same time period

However, Escape Ranch is currently a unique situation in that management intensity has dramatically increased over the past 4 years resulting in high survival and reproductive demographics typical of an increasing population.

Nonetheless, lower overwinter survival, as seen in the Red Hills, creates a situation where higher levels of production are typically required to maintain an overall high-density stable population. In Albany, such high production is not always necessary, because overwinter survival is typically higher. So, what does that actually mean? This means per capita production must be higher in the Red Hills to produce a density similar to that of the previous year (and hopefully higher!). 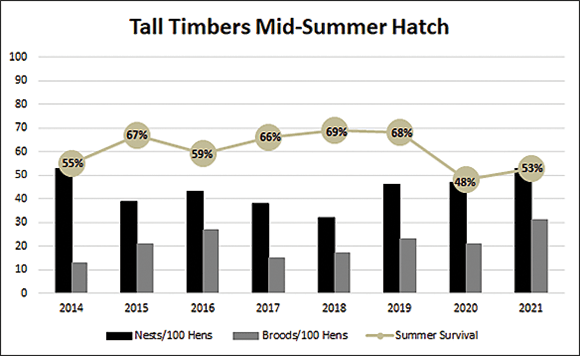 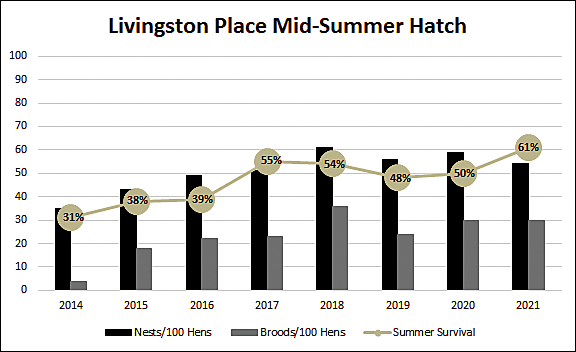 As we discussed in last year’s Quail Call, high male incubation rates are an excellent indicator of strong production. Male contribution has been above average this year on both Tall Timbers and Livingston Place. In fact, between Tall Timbers and Livingston Place approximately 28% of the males in our radio-sample have incubated a nest, compared to only 8% on our Albany site. Again, not all stable populations are created in the same way. Adult survival in the Red Hills was above average on Livingston Place, but below average on Tall Timbers at the mid-point of the breeding season. The excellent early hatch on Tall Timbers and above average survival on Livingston Place provide reason for optimism heading into the second half of the breeding season. Additionally, chick and brood survival have been good due to timely rains and lack of significant weather events. However, while all of this information can produce a fall forecast, there is still time for things to change. The second half of the breeding season is critical for the fall, as these chicks make up the highest proportion of fall juveniles. We will continue to monitor throughout the remainder of the breeding season, to provide a final update and continue to understand and paint the picture for how these different populations maintain stability from year to year.

This year’s Albany population is being built upon above average carry-over from what were near record bird densities last fall. The populations in Albany have been on a pretty good run since the last summer drought in 2014, and are apparently still benefiting from the new ground effect following the cleanup from tornadoes in 2017, and hurricane Michael in 2018. Our study site is also benefiting from removal of predator habitat by thinning young pine stands and removing snags, as well as from observing high cotton rat numbers following intensification of coyote and bobcat trapping.

These factors all contributed to 70% overwinter survival coming into spring 2021, which is above the 62% average shown on the graph, and well above our 30-year long term average of 52%. In fact, on April 1 of this year, we documented the record high spring breeding density for the 30 years we have monitored this population. As our President & CEO Bill Palmer likes to say about the region’s property managers, “these folks have gotten really good at keeping quail alive.”

At the midpoint of the nesting season in Albany, female nest per capita is well above average for the time period shown Figure 2c), while brood production per capita is only slightly above average. As mentioned previously, male contribution is low in Albany with less than 10% of males incubating a nest, but this is normal for this population in most years. Summer adult survival is also well above average, which is good news for the second half of the breeding season, and reason for cautious optimism. We will continue to monitor these birds throughout the summer and report on the final hatch numbers in early October. 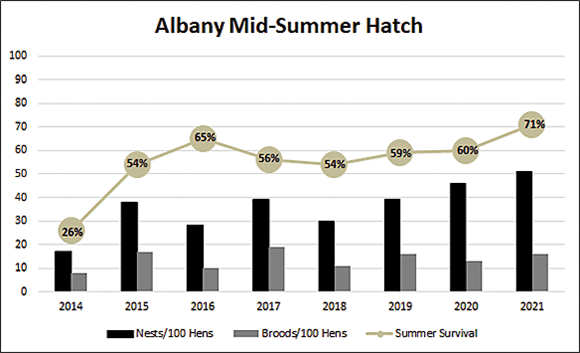 This year marks the fourth breeding season we have had radio-tagged birds on Escape Ranch in central Florida. Central Florida quail operate under a slightly different calendar. What we typically consider the mid-season hatch in Albany and the Red Hills (July 15), is more representative of the latter half of the breeding season in central Florida. Quail in this population typically begin the breeding season in late February or early March, (the first detected nest on Escape Ranch started incubating on March 18th), and hatch their final nests in late August to early September.

While percentage carry-over was below average for this site, high densities the previous fall still resulted in good numbers of potential breeders heading into the spring of 2021. Escape Ranch saw a strong start to the breeding season, with above average female per capita nest production and average per capita brood production (Figure 2d). 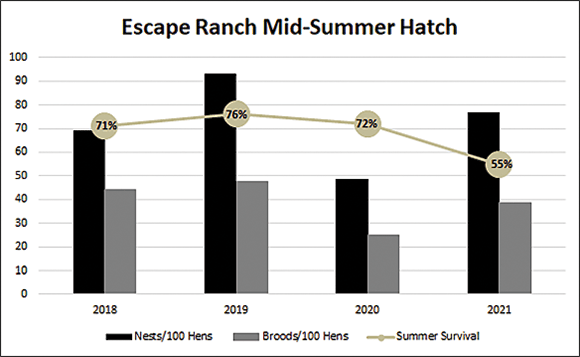 Additionally, brood survival has been excellent thus far due to a delayed start of the rainy season in central Florida. Male contribution this year in the central Florida population is similar to what we see in the Red Hills (~20% have incubated a nest), and is indicative of strong production. At the mid-season mark, adult survival is considerably lower than average. However, the late season rains characteristic of central Florida, should improve cover conditions and ultimately have a positive effect on adult survival, facilitating late season productivity. As with our other sites, we will continue to monitor this population and provide a final report at the end of the breeding season.