The 2019 breeding season is well behind us, and many bird dogs have now had the opportunity to knock off the rust from last year, hot on the trail for a covey’s scent. Despite the late-season conditions hampering the late hatch production, covey call counts in October and November have indicated that bobwhite numbers this year are just fine, notwithstanding the drought in July‒September. Early hunting reports throughout the Red Hills and Albany regions have corroborated what the birds have been preaching over the past several weeks at sunrise: bobwhite numbers are up as much as 35% on some properties from last year!

Despite getting out the gate fast, overall production in the Red Hills was lower this year compared to our long-term average. In the Red Hills region, we often experience a good late-season push, which makes up a good portion of the total season’s production. But, this year the birds seemed to run out of steam by August. So how did bird numbers remain the same or even increase this year?

While per capita nest and brood production was slightly below average (see Figure 1), adult survival was well above average, and a moderate late hatch was observed with a few broods hatching in late September. The higher than normal adult survival may be explained by the high cotton rat numbers, especially early-to-mid breeding season (April through July). Even better news is that chick survival was higher this year than we have ever recorded, since we have been radio-tagging chicks. This good chick fortune is likely a combination of factors (high rat numbers, low and timely rainfall, abundant food resources, etc.), which was a much needed blessing to compensate for the lower than usual nest and brood production. Good chick survival also seems to have fueled larger than average covey sizes so far this fall! During our fall trapping, we captured a higher proportion of banded chicks tagged this past summer than in previous years. 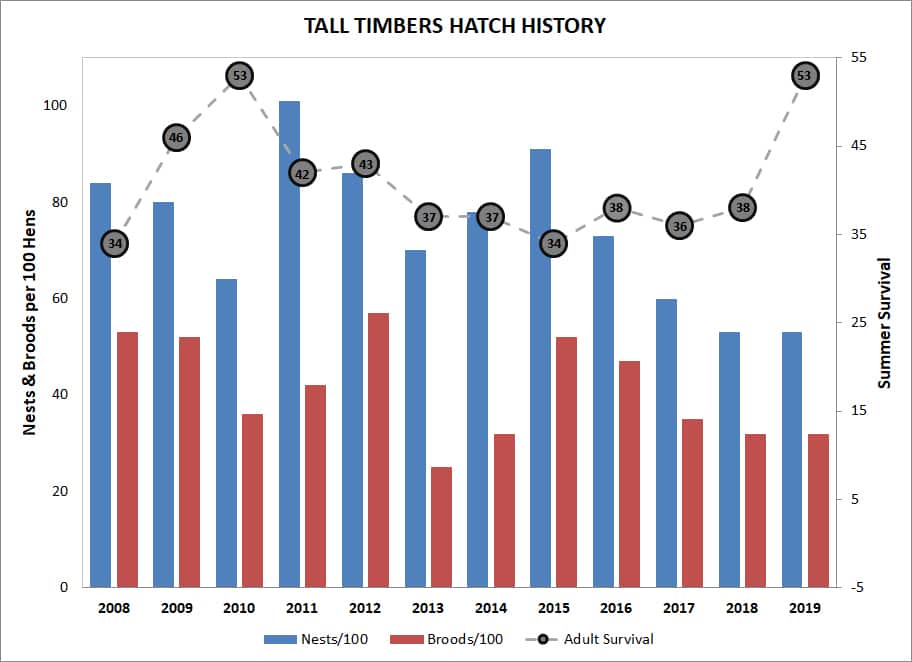 Figure 1. Tall Timbers hatch history showing per capita production (nests and broods produced per 100 hens alive on 1 April) and adult survival during 2008 to 2019. 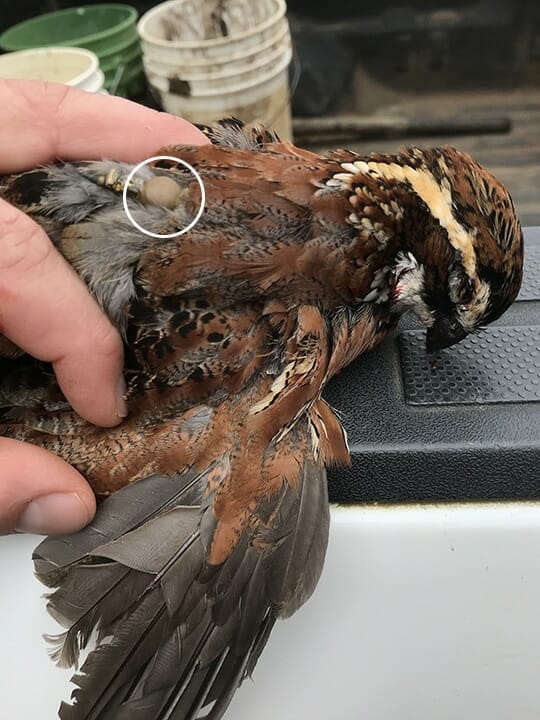 Speaking of chicks. This past weekend a male bobwhite was harvested on Dixie Plantation that hatched 27 July 2018, and was banded and radio-tagged (see picture), on 9 August 2018—and the chick was still toting the suture-tag. Not only is this bird more than 1-year-old, but this marks the oldest chick recovered with a sutured radio-tag to date. We have been saying for a couple years now that a 10% change in chick survival can net as much as a 24% gain in fall abundance. I think we just might reap the benefits of fabulous chick survival this hunting season!