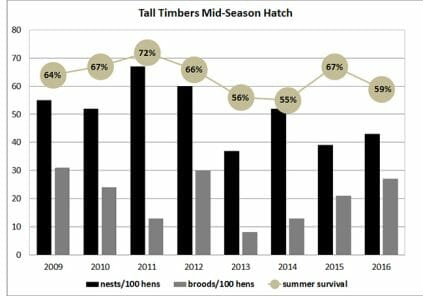 The 2016 quail hatch got off to a quick start with some managers reporting bumble-bee sized chicks as early as late April and early May. Our first nest by a radio-tagged hen, however, was not incubated until the first week of May. A flurry of nesting activity since then resulted in good nest production (51 nests produced per 100 hens) early, but slightly lower than average to the mid-season point (15 July) compared to our long-term data. Nest success has been very good at 64%, but lower nest production has resulted in fewer overall broods being produced on the ground — 27 broods produced at the mid-season point per 100 hens alive in April.  Adult survival is also slightly off at 59%, compared to our long-term mid-season average of 63%. The good news is that in the Red Hills region nest and brood production is higher than it has been at this point in the last 3 years.

The Albany area is singing a similar tune such that nest and brood production are a little below their 10-year average, but not by much. A big difference in the Albany region is high adult survival (63%), which is well above their long-term average (<50% survival). This survival boon has been attributed to good cover conditions, which is linked to plentiful and timely rainfall. The high survival sets up the remainder of the breeding season nicely for good production and bodes well for a good late season hatch.

Brood sizes have been fantastic this year. In fact, early season nests contained ~3 more eggs than usual compared to long-term averages; mid-season clutches are also larger than normal. We attribute this to a relatively mild winter, good cover conditions and ample food, producing better-conditioned hens at the start of the breeding season. Similarly, during our brood-capturing efforts, we have observed chicks weighing 1-2 grams heavier at 11-12 days of age. Better conditioned hens result in higher quality eggs, improved egg production and healthier chicks at time of hatch. We have already radio-tagged close to 90 bobwhite chicks this season, and we have not only observed larger chicks, but they seem to be stronger and are flying earlier. Chicks typically are relatively weak flyers at 14 days of age, but this year chicks have been flying out of our capture panels as early as 12 days of age. Taken collectively, chick survival is much improved over last year. 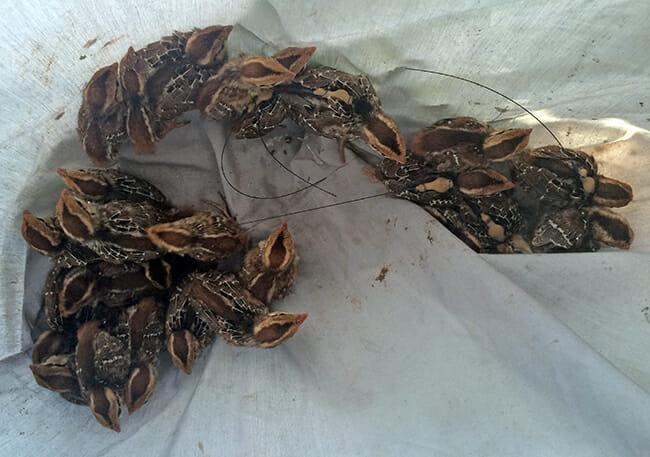 Twenty-four chicks in a single brood capture. Larger than average clutch and brood sizes this year will help to offset the high chick mortality by snakes and other varmints. Photo by Kyle Lunsford


Despite improved chick survival, high chick mortality seems inevitable. Snakes continue to strike. They remain the leading culprit depredating young quail chicks, especially those chicks less than 5 weeks of age. Earlier this season, 4 radio-tagged chicks were depredated by 4 different corn snakes (i.e., red rat snakes) in a single weekend! In North Carolina, a chick mortality event confirmed our suspicion that one snake will eat multiple chicks at a time. We found this was the case in 2 separate incidences — both yellow rat snakes. In the first occurrence, the yellow rat snake consumed 4 chicks (3 radio-tagged, 1 banded-only). In the second incident, a different yellow rat snake depredated 4 chicks (1 radio-tagged, 3banded-only, and 1 untagged). As chicks mature and reach 5-6 weeks of age, snake mortality wanes. However, we continue to see that mammalian predators (bobcats, raccoons, etc.) depredate quail chicks at a high rate also, especially once they reach 5 weeks of age until they are full grown. 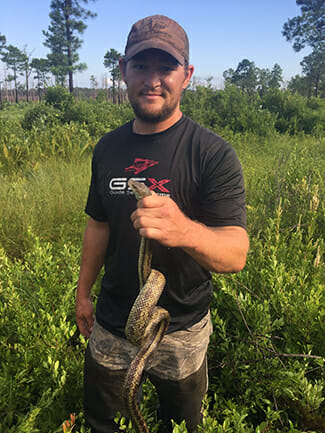 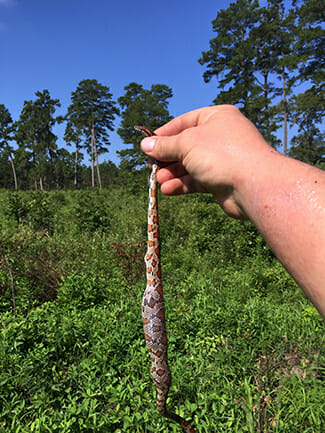 Continuing supplement feeding will aid in keeping adult birds in good condition, and hopefully more productive, producing more chicks that are in better condition from time of hatch — poised to grow and fly faster. Year-round trapping of meso-mammalian predators can help to carry more young birds into the fall, especially this time of year, when young chicks are particularly vulnerable.