The Red Hills and Albany Area quail plantations received an impressive designation – National Legacy Landscape – in recognition of the landscape scale conservation efforts for bobwhites. The award honors the region’s landowners for their longstanding dedication to bobwhite management, the skilled managers that have sustained bobwhite populations, and the partnership with research and management agencies that has been a trademark of this region for nearly a century. The longstanding alliance between landowners dedicated to the best quail management, and researchers developing and refining management practices, goes back to 1924, when Lewis Thompson, Henry Beadel and many others supported Herbert Stoddard’s quail investigation, followed by the Cooperative Quail Study and finally Tall Timbers and the Albany Game Project!

The Legacy Landscape Award recognizes special landscapes that provide national significance for Northern Bobwhite conservation. Specific criteria must be met for a region to be designated as a Legacy Landscape which includes: 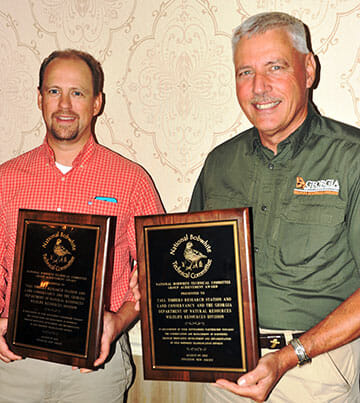 “Bobwhites have declined by about 90% in Georgia since 1966, due primarily to changes in land use,” said Reggie Thackston, WRD Bobwhite Project Leader. “This policy provides a science-based approach to expedite the recovery of bobwhite populations following habitat restoration.”

Dr. Theron Terhune, whose research with TTRS provided the scientific basis for the policy, emphasized, “Suitable habit is the most important step to restoration success and must first be established before a translocation occurs.”

Development of the current translocation policy guidelines began in 1997, initiated by WRD with input from Tall Timbers Research Station (TTRS) based on research. The policy standards permit the translocation of wild bobwhites from private land with high density populations to lands with newly developed high quality habitat (1,500+ acres) and ongoing management that have low density bobwhite populations. The policy was finalized in 2006, and since that time Georgia has participated in the movement of 1,275 birds to five properties. Through this policy and the efforts of TTRS and working with dedicated private landowners, bobwhites have been restored across 18,700 acres. In addition to Georgia acres restore, more than 50,000 acres have been restored to wild bobwhites using translocation.