November was about three degrees cooler than the long-term average, but unfortunately for dog handlers, the cooler temperatures did not last through December and January. According to the National Weather Service, December was nearly four degrees warmer than average and January was eight degrees warmer. During December and January there were 14 fewer days than normal with below freezing temperatures. The growing season appears to be already beginning with early bud break for many plant species and ovaries on bobwhites began to recrudesce (re-grow) in early February. Quail have been calling “bobwhite” along with covey calls on our study area in South Florida since January; and we heard the first “bobwhite” calls February 13, this year. 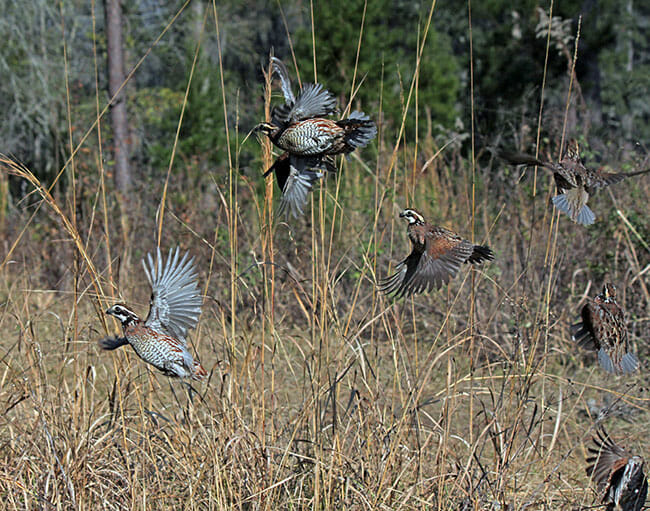 Click on the following link to view a roostng bobwhite covey via FLIR Infrared Camera:https://vimeo.com/59655215

On warm nights coveys roost in a more open pattern. This video shows dispersed pairs of bobwhites rather than the classic “covey circle”.  We notice increased aggression among individuals within a covey this time of year as pair-bonding has begun. While conjecture, pairs in this video may have established a pair-bond and are now awaiting nesting conditions.

While the unseasonably warm weather and ample ground cover has made finding coveys inconsistent from day to day, the benefit has been above average overwinter survival. From November through January, survival of our radio tagged sample of quail on our study areas has exceeded 80%, which is well above what we see during colder winters. The combination of less natural mortality and lower harvests should result in an excellent carry-over of breeders. Over the last 20 years, we have seen several cases of peak populations as a result of two back to back years of excellent overwinter carry-over.

Weather predictions are for warmer and drier weather for the short-term (through March), followed by significant uncertainty in the forecast, with predicted variability for summer time weather, with periods of drought and periods of above average rainfall. With an early breeding season forecasted, typical burning in March and early April will set the stage for quail to take advantage of an early nesting season. If severe drought takes hold during March, stretch out burning, at least on more fertile sites, until rainfall returns; this will minimize the length of time for the cover to rebound, and benefit the birds by providing more habitat, which will increase their survival.