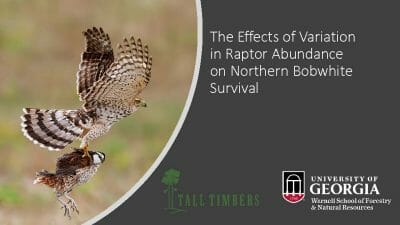 For more than a decade (2008–2020), the Tall Timbers Game Bird Program has collected raptor count data on two Red Hills properties and one Albany area Plantation in attempt to capture spatial and temporal patterns in raptor abundance as it relates to bobwhite demographics. In April, Justin Rectenwald successfully defended his thesis earning a Master’s degree at The University of Georgia using this long-term dataset where he evaluated “The Effects of Variation in Raptor Abundance on Northern Bobwhite Survival.” He is now employed full-time as a Game Bird Biologist with the Albany Quail Project. As with any good research, we were able to corroborate a few “prior beliefs,” quell some others, and ask some new questions. In this summer’s edition of the Quail Call newsletter, we will recap our findings, but here are a few key take home points from Justin’s thesis:

Raptor abundance varied throughout the year with the timing of regional pulses varying by species group. 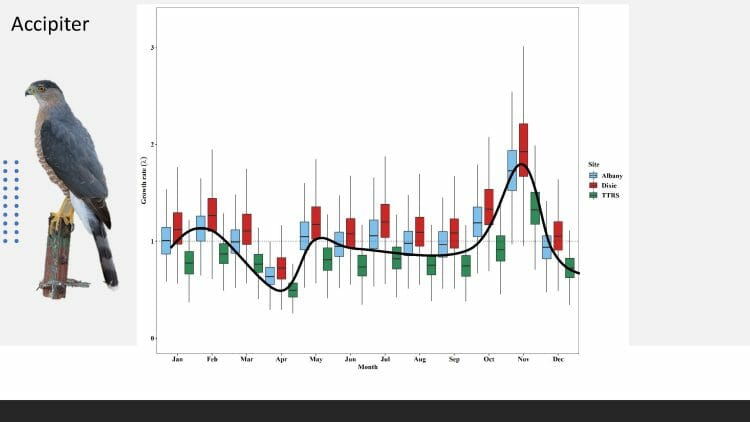 Accipiters (e.g., Cooper’s hawks), buteos (e.g., red-tailed hawks), and owls exhibited different abundance patterns seasonally and annually both within and among species. These fluctuations in raptor numbers were largely associated with natural migration for accipiters and buteos and dispersal of juvenile owls. The bulk of regional and temporal variation in raptor pulses was during the bobwhite non-breeding season, whereas raptor fluctuations during the bobwhite breeding season (May–September) remained relatively constant and similar for each raptor group. Whereas a latitudinal effect was not observed in our data, differences did exist among sites, indicating that variation in raptor numbers observed may be related to differences in resource availability (i.e., presence/absence of hardwood drains or amount of hardwoods in uplands). 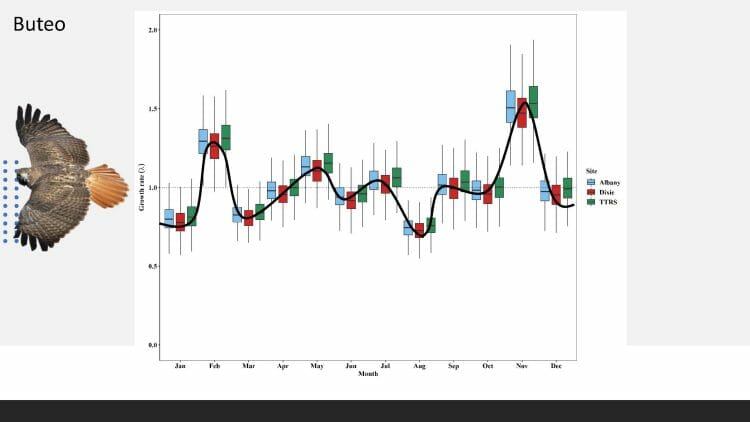 Bobwhite were more vulnerable to buteo and owl depredation during breeding season due to reduced vigilance of mating activity by bobwhite, as well as nest-building and egg-laying, incubation, and brood rearing activities. An increase in buteo and accipiter abundance was observed in the late summer and fall resulting in declines in annual bobwhite survival. In particular, as previously thought, accipiters have a negative influence on bobwhite survival in late winter, which is associated with an increase in accipiter abundance coupled with deterioration of cover conditions late in the hunting season.

Owls appear to have a larger impact on bobwhite survival, especially during the breeding season, than previously thought. 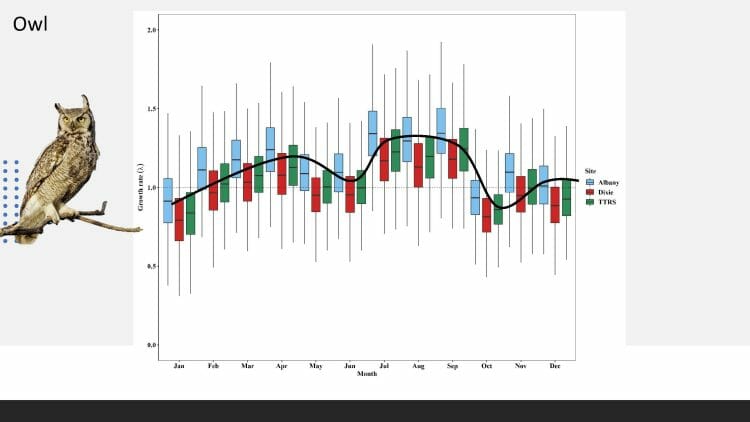 A somewhat novel or surprising finding from this research was that owls influenced survival at a higher rate than expected. The data suggest that for each additional owl added per 82 acres, bobwhite survival decreased by nearly 3.5 times. As is also true for accipiters, this effect was much larger than that observed for changes in buteo density, but there are also more buteos, as a whole, on the landscape. It appears that a greater proportion of barred owls exist on the landscape in the Red Hills region, compared to a greater number of great-horned owls in the Albany area. While great-horned and barred owls are sympatric species, there is a high amount of competition among these owls, which may impact bobwhite survival by impacting species-specific owl abundance in the uplands.

Although avian predators are federally protected, we can moderate their impact on bobwhite mortality rates by implementing sound management practices to reduce both the amount of raptor habitat in the uplands, and increasing the quality of vegetation conditions, as well as employing additional practices, such as supplemental feeding to reduce bobwhite foraging times. This research indicated that the major pulses of avian predators due to migration in late winter and early spring is over in the Southeast by late February and early March, but this is also a moving window related to weather conditions. For example, cold winters may delay Accipiter migration timing, which could dramatically decrease monthly bobwhite survival during late winter and impact bobwhite breeding densities. Similarly, cotton rat survival and abundance may also be influenced by these same pulses in raptor abundance. Importantly, this study demonstrates that during most years when a proper burn program is implemented (small scale burning, and distributing burns properly during March–May), raptor impacts on bobwhite survival can be mitigated, but large scale burning or burning too much at one time may have negative impacts on the bobwhite population. Going forward we plan to take a closer look at northerly spring migration patterns and how they are affected by weather, as well as how habitat modifications (i.e. hardwood removal, thinning mid rotation pines, snag removal) may impact raptor numbers on a site.