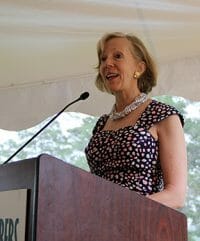 Cornelia Corbett, Chair of Tall Timbers’ Board, thanked and recognized Rosemary Ripley who represented the Livingston family, and who was a trustee of the Geraldine C.M. Livingston Foundation. In 2013, the Foundation gifted the 9,100 acre estate to Tall Timbers for future research and conservation. Mrs. Ripley thanked Tall Timbers “…for your vision and courage of taking on a project of this magnitude…our hopes and dreams are with you in preserving places like this for future generations.”

The featured dinner speaker was John Flicker, former president of the National Audubon Society and current president of Prescott College. Mr. Flicker reminisced back 25 years ago to the first dinners of the then Red Hills Conservation Association (now Tall Timbers Land Conservancy).  Back then the event was fondly known as the “cold butt dinner” as the attendees sat on metal chairs freezing with the stiff winter wind blowing off Lake Iamonia. 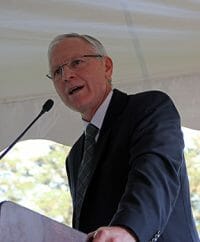 Flicker had a serious message to deliver.  He remarked, “As I look ahead at the future of conservation, I don’t think our limiting factor will only be about money. It will be about people and building the next generation of conservation leaders who value land conservation and who have the skills and motivation to carry on the work. Unless we build this new generation of people who make conservation a priority, everything we have fought to accomplish during our lifetimes will be lost.” He went on to say, “Young people today do not grow up on farms. They don’t have the woods behind the barn like I did. They live in cities and they spend increasing amounts of time at computers and iPhones. They learn a lot about the environment in school, more than I did.  While they are literate about the environment, they don’t have personal experiences in nature—they lack an emotional connection.”

He offered a series of educational reforms and a new learning model that Prescott College will be offering its students. The new model will integrate digital technology with hands-on direct project experience off campus. He believes more small colleges will be heading this way. Having recently overseen his first graduation as the new college president, Flicker stated, “I always try to remember why I am doing this. It’s about our students. It’s about those values I learned as a kid playing in the woods on the farm. Those are the same values that bring us all back here to this beautiful landscape. It’s why we protect places like this, and why we want your children and grandchildren to experience these same things out in nature and grow up with those same values, so they will carry on after us.”

For a view of the great time attendees had at the dinner please visit Tall Timbers Facebook post. 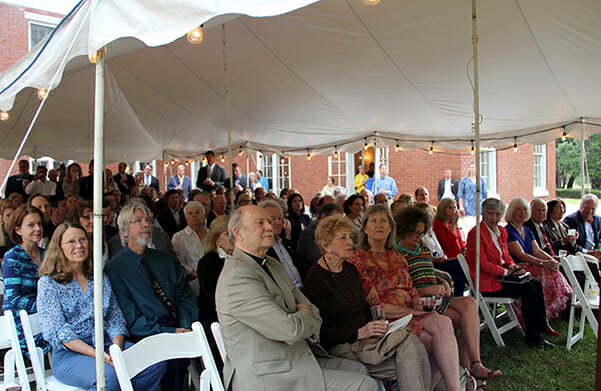