Reintroduction Done on a Dime May Work

Reintroducing an extirpated bird (locally extinct) can be a time consuming endeavor. For decades, biologists favored the use of holding pens on recipient sites to ensure translocated birds had time to acclimate after translocation. Biologists also have often been pretty selective with the individuals they tried to translocate, often insisting that complete family groups be captured and moved rather than an individual here or there.

These were indeed the strategies used in an early attempt to reintroduce the Brown-headed Nuthatch to south Florida. Thanks to the extensive timber harvesting that took place early in the twentieth century, the nuthatch has been extirpated from many areas south of Orlando, including Everglades National Park near Miami.

Pinelands on Everglades Park had recovered by the early 1990s, and the improved conditions led park officials to consider a nuthatch reintroduction effort. As was the trend at the time, biologists attempted to net and translocate complete family groups and also held birds in small pens on Everglades National Park for an acclimation period.

Although it ultimately was successful, it sure required a lot of time. 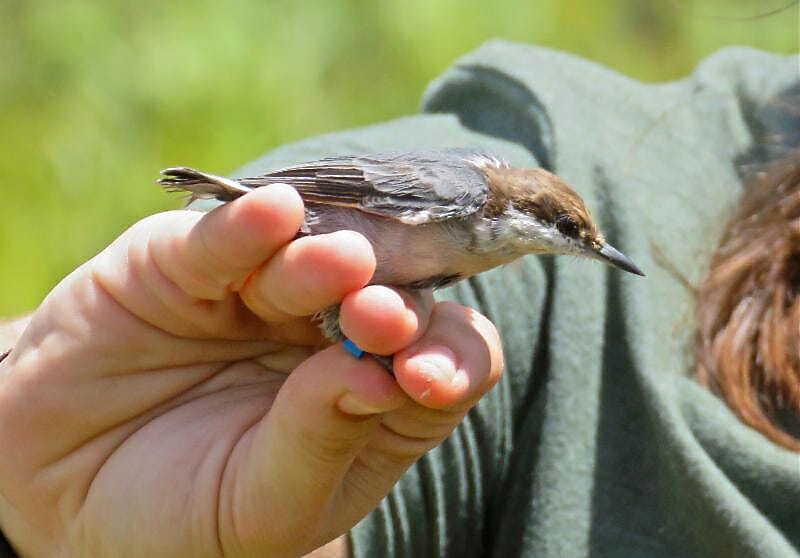 Brown-headed Nuthatch about to be reintroduced to Jonathan Dickinson State Park near Jupiter, Florida.

Our long-term study of nuthatches on Tall Timbers has shown that young of the year make a decision to disperse pretty early in life. Young birds start to leave home about 2 months after fledging, and it’s easy to distinguish young males and females at this time of the year based on their calls as well as their distinctive juvenile plumage. These insights led us to  test a less time-consuming method of nuthatch reintroduction, basically catching young males and females at a time when they are normally dispersing and then simply guiding their dispersal (via a truck) to an unoccupied habitat.

Last August, we netted and transported 5 juvenile males and 5 juvenile females from St. Sebastian Preserve State Park to Jonathan Dickinson State Park near Jupiter, Florida. (See video of nuthatch release.) The nuthatch had disappeared from Jonathan Dickinson site before it became a state park in the early 1950s. The habitat has recovered and is looking great under park management, but the site is isolated by large areas of urban development throughout south Florida, 2 major highways, and other impediments to nuthatch dispersal. 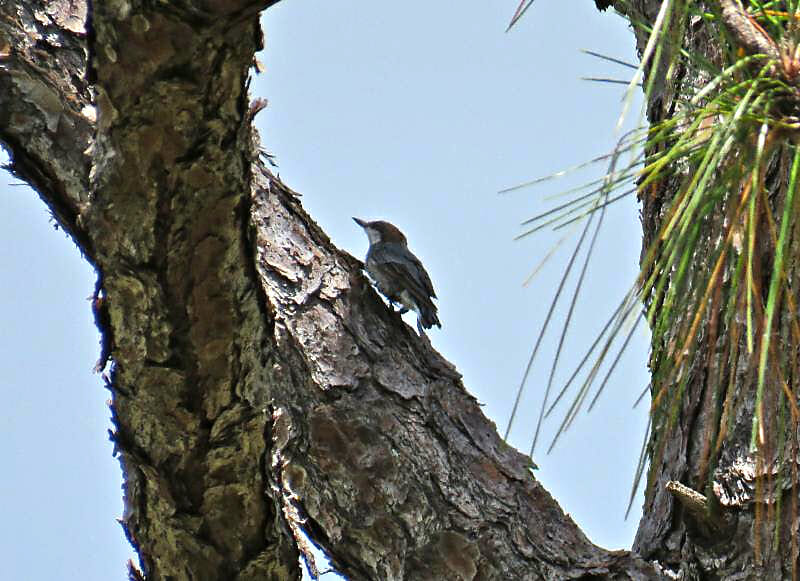 Brown-headed Nuthatch at Jonathan Dickinson State Park that was translocated in August 2018.

Of the 10 individuals moved, 8 were still on the site in early December. At least 3 potential breeding groups had also set up territories near the release sites, and we’ll be watching carefully for signs of nesting over the next few weeks. Volunteers and park personnel have reported seeing cavity excavations taking place, and we set out 8 nest boxes in January in hopes of helping the first nest attempt go more smoothly.

If this method works, it could make a lot of other nuthatch reintroduction efforts under consideration go much more easily. Translocation of a few juveniles each year could also help overcome some of the genetic consequences the loss of nuthatch habitat has created. Nuthatch populations in south Florida show subtle signs of a loss of genetic diversity, and translocating a few juveniles each year could help to reinvigorate isolated populations.

The return of the nuthatch could also mean good news for other local birds. The nuthatch is an important cavity excavator that creates cavities used in turn by Tufted Titmouse, Eastern Bluebirds, Great Crested Flycatchers, and other cavity-nesting birds. The tree top acrobatics of nuthatches are also appealing to birders, too, making reintroductions a boon for birders and the bird.