Scientifically Sowing the Seeds of the Sundial 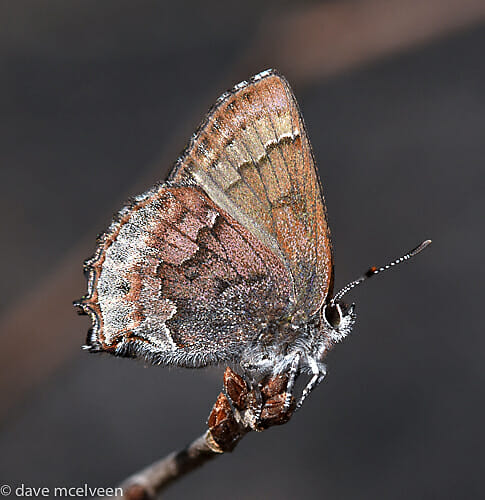 The seeds are sown, and now we eagerly await the results of a new experiment aimed at restoring habitat for a rare butterfly. The Frosted Elfin butterfly has faced range-wide declines for decades from pesticides, lack of prescribed fire, and overall habitat loss. But hope for the Frosted Elfin is not lost, as research takes a new, greener direction. 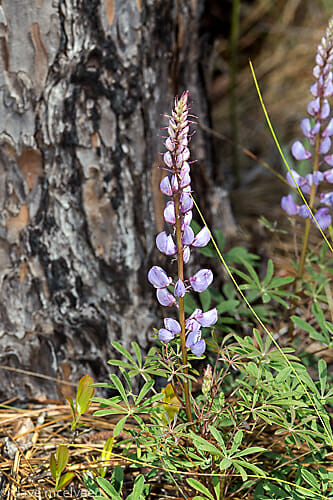 Associate researcher with the Stoddard Bird Lab, Dave McElveen, has spent years investigating the butterflies and has turned his attention to the plant that this species needs the most. The Sundial Lupine is a modest yet beautiful flower and is the only host plant for the Frosted Elfin’s larvae. The lupine however, is sensitive to hardwood encroachment from the lack of disturbances such as prescribed fire. When an area isn’t burned for over four years or more, the lupine declines and with it, the Frosted Elfin.

“So once the lupine is gone, how do we get it back?” asks Dave, “and what is the best way to propagate and establish lupine to the areas where it once was, so that we can bring back the Frosted Elfin?” After all, the flower stands at a little over a foot tall so dispersing its bulky seed across the landscape is a long and arduous endeavor. It would be easier if people could disperse the seeds instead or maybe even plant a piece of the lupine itself. These plants have a rhizome, an underground root that grows parallel to the surface. These long roots occasionally shoot up new stems as it slowly creeps along the ground. Once the rhizome is long enough it can be divided into multiple plants that can then be moved to other locations. So which is better? Planting seeds or planting rhizome cuttings?

Information on how to grow and plant this curious flower is few and far between, so Dave acquired the help of Tall Timbers’ resident horticulturalist, Jenny Taylor. With Jenny’s green thumb and sage advice, they developed a plan to see which planting method is best but also when to plant. Each plant has its own particular germination time, which typically corresponds to fall or spring. So to solve that, seeds and rhizomes will be planted in fall and spring, creating four study plots total.

Lucky for Dave and Jenny, Apalachicola National Forest’s Munson Hills Unit provides an ideal study area as it’s home to one of the largest populations of lupine and Frosted Elfin’s left today. This provides a source of seeds and rhizomes from a robust population to use for the project, which will require planting about 150 of these native flowers.

This fall season marks the first stage of planting for the project. With the help of Bird Lab Woodpecker Specialist Rob Meyer, the first seeds were sown into the soil at the study plot in late October this year. Using a small weeder and with some mild back discomfort, each seed was gently pushed into the sandy soil by hand. Later, in early November, Dave and Jenny hope to find rhizomes to plant by going to patches of lupine that had bloomed earlier in the year. This flower however, recedes after it blooms in spring, and for most of the year lies dormant below ground. This means Dave and Jenny will need to go on a subterranean scavenger hunt to find the lupine in its dormant state. Once they collect the cuttings, they will return to the plots to hand sow each rhizome—just like they did for the seeds. 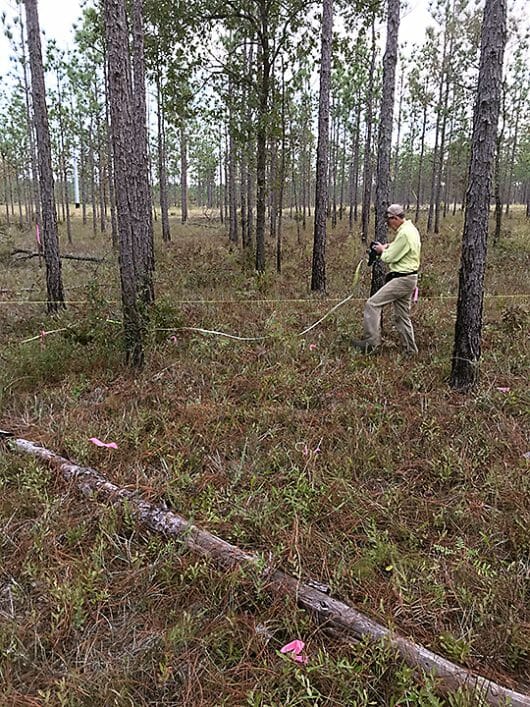 Dave measures where to place each seed in the plot Like most gardening, reaping the benefits will take time. The second half of the plantings will take place next spring, but perhaps by then, some of these fall plants may reach the surface to tell us how they did. Until spring, we will remain hopeful and wait patiently for the first flowers to emerge. The information learned from these plots at Munson Hills will help to inform land managers across the region on how best to reunite this once common duo of flower and butterfly.