In April 2011, a second Public Lands Summit was held at Tall Timbers to update the state and federal agency leadership on the Upland Ecosystem Restoration Project (UERP) – its successes and challenges. UERP is a multi-agency effort to increase populations of northern bobwhites and other declining fire-dependent wildlife species.

The primary 10-year goal of the project is to establish 100,000 new acres of high quality upland habitat on public lands in Florida. In attendance at the Summit was the leadership of Florida’s agencies who manage public lands in the state: FL Division of Forestry (DOF), FL Department of Environmental Protection (DEP) and FL Fish and Wildlife Conservation Commission (FWC), as well as representatives from the US Forest Service (USFS) and other conservation groups.

While the leadership has changed since the first Summit was held in November 2005, the understanding of the value of this collaborative project to Florida’s uplands management has not. 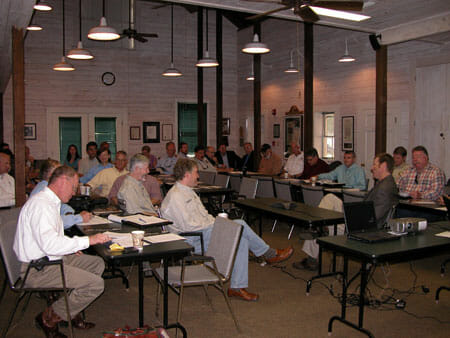 Public Lands Summit Attendees listen to Commissioner of Agriculture Adam Putnam, who welcomed them to the Summit via conference call.

As in 2005, the main concern of the UERP project continues to be improving habitat for species of birds in serious decline, including  bobwhite, Bachman’s sparrow, brown-headed nuthatch, loggerhead shrike, eastern meadowlark, as well as 40 threatened plants and animals. As an indication of the seriousness of the declines for all these species, harvest of bobwhites has declined in Florida from over 3 million just 40 years ago, to less than 100,000 today. These declines are due in large part to changes in land use in Florida; but where potential habitats still exist on our public lands, frequent fire is key to sustaining required habitat and wildlife populations. This habitat can be found on private lands (hunting preserves) in parts of the state, where bobwhite thrive, because of sustained management with frequent fire.

UERP is not like any other project in Florida, both because it is multi-agency, and also because it is a private-public partnership. Director of DOF, Jim Karels, commented on how the UERP Director, Greg Hagan, works with each agency to custom fit a management plan that suits their objectives. Taking a long-term view is critical, because habitat improvements take time and everyone is learning the best approaches of improving habitat. To facilitate learning, monitoring the vegetation and bird community responses provides feedback to both managers of properties and UERP. 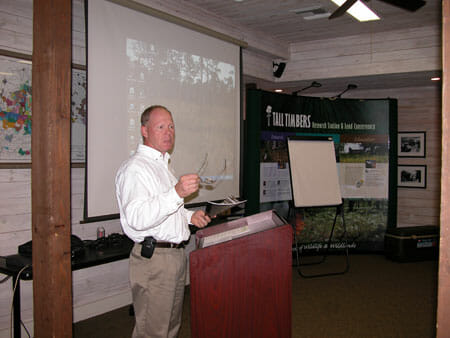 Jim Karels, Director of the Florida Division of Foresty speaking at the Public Lands Summit

Benefits from UERP go beyond improving outdoor recreation opportunities for quail hunters, bird watchers and other outdoor enthusiasts. Parks Small, DEP Bureau Chief, recognized how important healthy uplands are to Florida, both from reducing wildfires and reducing management costs (it is easier to manage uplands burned every 1-3 years, than 3-5 years, as fuels for fires are much reduced). It costs roughly ten times as much to restore habitat as to maintain it and at least five times more to fight wildfires than prescribe burn! Other benefits from healthy functioning uplands include ecosystem services, which help to sustain human life, and improved resilience of ecosystems to stressors (like droughts and flooding).

Objectives, successes and challenges Ahead

Greg Hagan discussed the objectives of the project and presented some of the successes and challenges ahead.

The objectives of UERP are to develop long-term, landscape scale projects on public land with measureable targets. These targets are to:

The challenges ahead Hagan says are to: “keep the good stuff good”, refine prescribed burning to meet wildlife objectives (how much fire and when), engage private partners to increase resources, and keep focused on the objectives stated above.

A successful model – accountability and action

Although all states in the southeast have plans to restore habitat for bobwhites, UERP and its state and federal partners in Florida have broken out of the continuous planning cycle. UERP provides a statewide view of the issues rather than an individual agency focus. UERP, as an independent entity, facilitates communication within and among agencies; assesses agency activities by monitoring and giving immediate feedback (accountability); and finally, UERP has been able to obtain outside dollars to directly fund increased land management through public-private partnerships.

The restoration of longleaf pine on the Osceola National Forest is an example of an UERP/Tall Timbers collaboration. Implementing UERP’s model, Carl Petrick, Ecosystem Management Staff Officer with the National Forests in Florida, is working with  UERP Director Hagan, on a Collaborative Forest Landscape Restoration Project. Petrick, who spoke at the Summit, conceded that the flatwoods in Florida are in bad shape, needing twice as much prescribed burning as has been previously applied in managing the forests. Over the next five years, UERP staff will help oversee and monitor the restoration activities being conducted on the Osceola National Forest. The goal is to achieve a forest that is in good or excellent ecological condition – one that can be efficiently and effectively maintained with fire.

The Summit concluded with a discussion by Tim Breault, Director Division of Habitat and Species Conservation, FWC, on how important it was to sustain UERP and the partnership through the tough economic climate in Florida. Rhetorically he asked, “If there were additional resources available, where would the project expand?” He noted that to keep the momentum of UERP’s success going it was important to work collaboratively with Tall Timbers to look for non-traditional partners in the private sector, to leverage the dollars available through new public-private partnerships, and to showcase the project to the legislature and the public through better communication and outreach and education activities, such as field days.