Shaping Up To Be a Good Hatch Across the Region 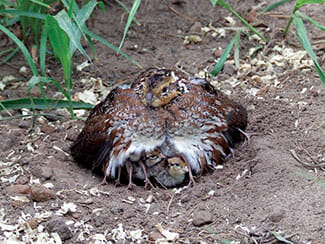 Reports from managers suggest that bobwhite populations have a good chance of increasing this year across the Red Hills and Albany region. “Mega-broods” (broods of greater than 20 birds) comprised of varying ages of chicks have been consistently reported, which points to a quality hatch already thus far. Our radio-telemetry data on Tall Timbers, Dixie Plantation, and the Albany area support these observations and indicate that nest production and brood production is up significantly from last year. In fact, at the season’s midpoint compared to last year, brood production is up 110% in Albany and 320% on Tall Timbers. This is a direct result of good adult survival and better nest production in Albany, and much improved brood production as a result of brilliant nest survival (64%) on Tall Timbers. This is welcomed news for many, especially those in the Albany area experiencing low production last year (2014).

Many of our radio-tagged birds recently started incubating nests beginning last week, and with any luck this final surge will yield as good a late-season production as during the first half of the season. We are hopeful that weather conditions remain favorable for a strong late hatch, which may turn a regionally good hatch into a great one!

Regional pulses in bobwhite populations typically indicate large-scale influences on local demographics. For example, bad weather in the form of droughts may result in reproductive shutdown as seen this time last year in the Albany area. As such, these “good times” we are seeing across the region this year may be a direct result of ample spring/summer rains, which has produced abundant cover quickly after prescribed burning (resulting in good breeding season survival) and quality native food resources (reducing overall impact of predators). In addition, snake abundance may be down and/or snake movements may be reduced this year, as we have observed relatively low capture and recapture rates of snakes, potentially impacting nest and brood survival. This underscores the importance of quality habitat management year after year to take advantage of good weather, abundant resources, and low predation. 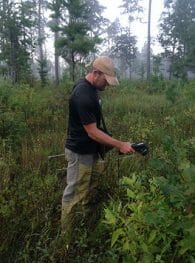 During the past couple of nesting seasons the Game Bird Program has been using Forward-Looking Infra-Red (FLIR) technology in hopes to unravel the mystery of bobwhite chick survival and brood amalgamation (mixing of broods). Bumping birds with broods off the roost allows us to count the thermal signatures of scattering chicks. In collaboration with the University of Georgia, we have successfully used these data to obtain survival estimates during the “brooding period” – typically the first 3 weeks of age. What we have discovered is that chick survival is much lower than originally anticipated, such that daily mortality rate can be as high as  about 6% per day during the first 21 days of life. This suggests that, on average, only about 30% of chicks make it to 3 weeks of age. Put another way, 70 out of every 100 chicks don’t make it to 3 weeks old.  However, right now as compared to previous years, we are observing high levels of brood mixing, which is an indicator that overall nest production and nest survival are good. This makes sense in that as more broods hatch and chicks survive, the opportunity for mixing of broods also goes up. 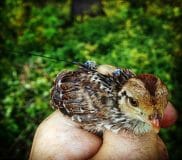 This breeding season, we have also successfully tested a new suture technique to attach miniature radio-tags on 10-12 day old chicks. We have deployed more than 45 radio-tags on chicks through mid-August. The survival of these radio-tagged chicks corroborate our FLIR results in that many don’t make it to 3 weeks of age. But, daily survival seems to improve substantially at about 4 weeks of age. As predicted, snakes are proving to be a primary predator of quail chicks during the first 3 weeks post-hatch, but then snake mortalities markedly decline as chicks grow to a size beyond that preferred by smaller snakes (e.g., corn snakes). Stay tuned as we continue to try and unravel the mysteries of chick ecology! More details on these results will be provided this fall in the upcoming Quail Call.