Over the past 47 years the Game Bird Program has been capturing, banding and releasing wild quail which marks the longest running band-recapture study of any game bird in the world. Since 1968 more than 28,000 quail birds have been leg-banded. From that dataset we have observed that, on average, annual survival for a population of quail is about 20% in good habitat or that approximately 80% of the population dies each year. Here in the Game Bird Lab, year after year and week after week we pick up radio-tags that once were fitted to a live bobwhite which is a persistent reminder that quail are simply good at dying. I recently heard it put this way: “On average a one year old quail has been dead for quite some time.” Indeed, only a small proportion of quail make it to 1-year of age even amidst high-quality habitat.  But last month we discovered that some quail can and do beat the odds. 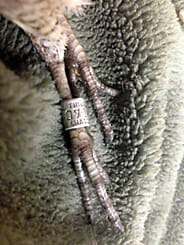 On Tall Timbers, we recaptured and released a male bobwhite (known in the lab as 091406, see photo) that was initially banded in 2009 making him nearly 6 years old. Alas, these odds are slim – about 1 in 15,000! To put that into perspective there is about a 1 in 3000 chance that you will be struck by lightning in your lifetime or you are 5 times more likely to be struck by lightning in your lifetime than come across a 6-year old quail bird. Our research has helped us to understand what drives quail populations and continues to shed light on how best to manage for these short-lived, illustrious game birds.

During the past few weeks we have seen an upsurge in raptors due to the migration and a resulting dip in bobwhite survival has ensued. This is a common pattern observed each year. Our long-term dataset shows that avian predation increases this time of year (January – March) resulting in lower bobwhite survival (see Figure 1) and another small but noticeable dip in survival during late-November and December both of which are associated with the raptor migration (see gray bars, in Figure 1, indicating relative raptor abundance). However, even after many of the migrating hawks have moved north weekly survival remains low during April, May and June (see Figure 1). This is likely associated with prescribed burning and subsequent increased movement by bobwhites to seek out unburned areas as well as covey break up and the onset of breeding season. As cover begins to respond and raptor numbers remain low survival begins to improve in July for much of the remainder of the year. Delaying some of your prescribed burning until after the raptor migration may help to improve survival. In addition, burning at a small scale (25-100 acre patches) and leaving burned and unburned areas patchily disturbed among upland sites can improve bobwhite survival during this critical time period. Good habitat management is our best defense against predation, and timely application of management may also help to improve a quail’s odds of survival.

As an extreme example of what can happen when burning is overdone, Tall Timbers monitored quail abundance on a property that did extensive burning during February and March, 2014. While the primary objective on this property is not quail management, it is one of the objectives. Increased burning is normally a good thing for quail but it can be overdone. Quail numbers on this property plummeted in 2015. While plantation managers know better than to over burn their properties, it is a good reminder to be cognizant of the size and distribution of burns each spring to maximize the carry- over of birds into the breeding season. 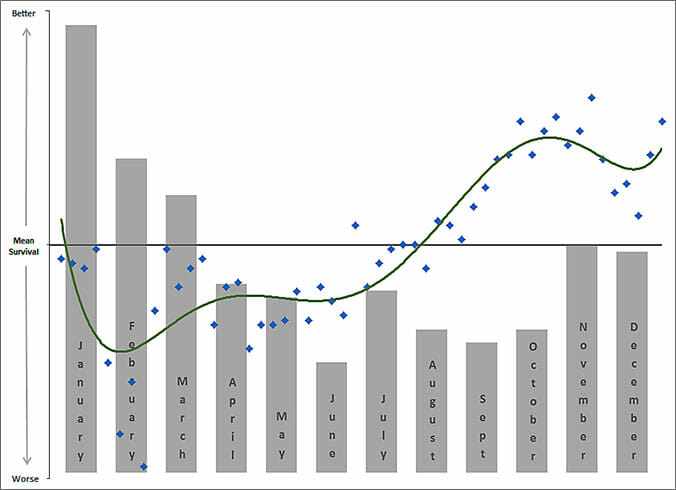