The following is a report by Angie Reid, Tall Timbers Fire Ecology Research Biologist, on her recent trip to Washington, DC to meet with members of Congress. She was part of a delegation from the Society for Range Management (SRM) that discussed policy issues affecting rangelands. Angie has been a Tall Timbers research staff member since 2010, and is the Treasurer of the Florida Section of the SRM. 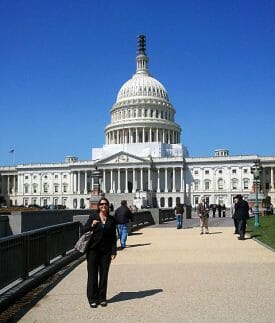 I have been involved with the Society for Range Management (SRM) since my freshman year at Texas Tech University in 2002. I was a past President of the Texas Tech Section of the SRM, and am now President of the national Young Professionals Conclave (YPC) of the SRM and the Treasurer of the Florida Section of the SRM. As the leader of the YPC and an active and committed member of the SRM, I was invited this year to accompany the SRM Board of Directors to Washington, DC for the annual DC Fly-in. The Florida SRM is mostly active in the central and southern parts of the state where large cattle ranches still exist. Although the Red Hills region is no longer a large cattle producing region, it was once the home of cracker cowboys and cattle operations. Like Tall Timbers, the SRM supports many conservation programs in the Farm Bill that are also used in the Red Hills region for habitat improvement.

In preparation for the trip, I studied policy issues relevant to both our region (the southeast) and out west. I must admit I’m not much of a policy buff but I learned a lot in the weeks leading up to the Fly-in. My role was to be a representative for the young professionals in the SRM, and more importantly to observe and learn how the SRM functions in Washington to accomplish the society’s goals and improve the position of its members in governmental positions and non-governmental organizations (NGOs) alike. 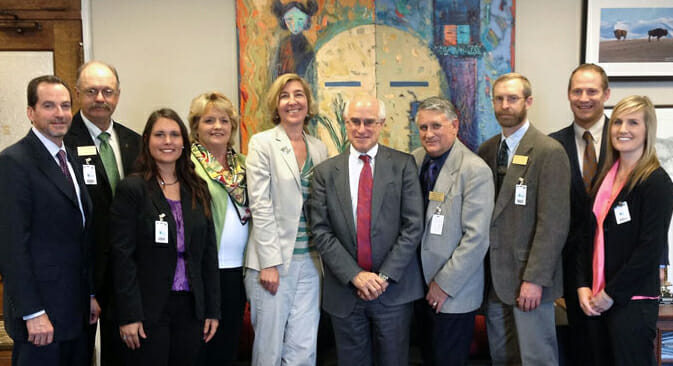 This year’s Fly-in took a different approach than in past years. We sought to make SRM the experts and go-to group for all information regarding rangelands for congressional members, their staff and agency personnel we met. Many groups meeting with high-level agency officials and members of congress ask solely for funding; the SRM group focused on how we could help them by providing rapid response, science-based information on rangeland issues. By establishing the SRM as rangeland experts and creating a good rapport with officials in Washington, the SRM will have a larger voice in policy issues concerning our rangelands.

We also discussed the importance of continued levels of funding for Farm Bill programs, explaining that lowered levels will only lead to increased expenses later, in order to restore the habitats that were underfunded this time around. Also discussed at each meeting was maintaining current levels of funding for agencies to ensure that field staff is able to focus on management rather than litigation. Additionally we discussed SRM’s collaboration with the Natural Resource Conservation Service (NRCS) and Bureau of Land Management (BLM) to conduct money-saving interagency training for Ecological Site Descriptions, while urging the US Forest Service (USFS) to get more involved in the collaboration. Other important issues we focused on were: specific budget constraints within the BLM, NRCS, and USF; support from agency staff for the Job Fair held at the annual SRM meetings; and funding for sage grouse conservation programs. I also had several opportunities to talk about the new Working Lands for Wildlife initiative involving NRCS and the US Fish and Wildlife Service (USFWS), and the need for appropriate requirements for fire return intervals associated with conservation program contracts (e.g. WHIP).

These messages were carried by the SRM representatives to a diverse group in Washington, DC. We met with senior agency staff of NRCS, USFS, and the BLM, including NRCS Chief Dave White, acting BLM Range Division Chief Mike DeArmond, USDA Under-Secretary and Deputy Under-Secretary of Natural Resources and Environment, and Executive Director of the Public Lands Council and that was just the first day! On day two we headed to Capitol Hill for a Wyoming Senate Delegation “meet and greet” where Keith Klement spoke with Senators Enzi and Barasso about the Grazing Improvement Act and had meetings with a staff member of Senator Reed who is on the Senate Appropriations Committee, and Congressman Mike Simpson and Congresswoman Cynthia Lummis who both sit on the House Appropriations Committee.  We also managed to squeeze in meetings with representatives from The Wildlife Society and the American Seed Trade Association.

After an impressive two days of meetings, I think the group was able to successfully establish the SRM as an authority on natural resource management on rangelands, and show that the SRM was an organization worthy of support with regard to the workshops, interagency collaborations, and certifications the SRM provides to agencies and private range managers alike. Members of Congress and agency officials we met with received a SRM statement paper on sage grouse, as an example of the expertise that can be provided. Since arriving back from the trip, the group has agreed on report language to be used by the Senate Appropriations Committee in support of Ecological Site Description development and application. This trip created lasting relationships and a shining reputation for SRM in Washington, DC. I was glad to be a part of it.