“What about the smoke?”

During Prescribe Fire Awareness Week (January 22-28 in Florida and February 5-11 in Georgia) and indeed throughout the year, Tall Timbers, the prescribed fire councils in Florida and Georgia, the Florida Forest Service and the Georgia Forestry Commission  promote the use of prescribed fire as a safe way to apply a natural process, ensure ecosystem health and reduce wildfire risk. But there is no question, that where there is fire, there is smoke. As we are in a region with large tracts of plantation lands and state and federal forest lands, where prescribed burns are regularly conducted, the resultant smoke and air quality is of concern to many.

Needless to say, breathing smoke is not good for you. However, one of the important goals of prescribed burning is to reduce fuel loads on the landscape so we do not experience large and difficult to control wildfires; these usually produce many times the smoke of a prescribed burn and can have very serious health impacts on the community. In contrast, prescribed burns are generally frequent enough to produce relatively small amounts of smoke, and we choose the conditions, including wind directions away from roads and highly populated areas, and atmospheric stability conditions in which smoke rises quickly and is readily dispersed. 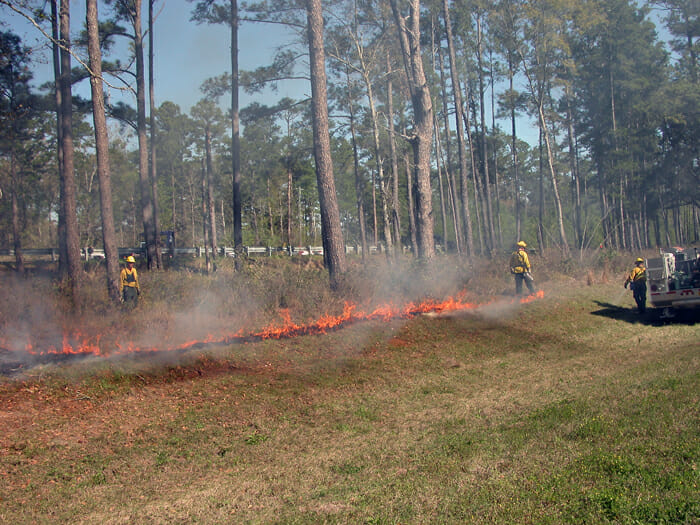 Although we cannot promise that everyone out there is doing everything just as they should, prescribed fire education and training is always making headway, and prescribed burners continue to get better skilled at reducing impacts to the community. In any case, although we might smell a strong whiff of smoke when someone is burning nearby, the fact is, only a very small percentage (<1%) of the particulate matter (small particles that impact our lungs) in the air that we breath over the course of the year comes from smoke from burning, the great majority of it coming from coal power plants and cars, especially in urban areas.

The amount of smoke in the air is also monitored and regulated. To conduct a prescribed burn, an authorization has to be obtained from the Florida Forest Service (previously Division of Forestry) or the Georgia Forestry Commission, usually the morning of the burn. It is their job to determine whether or not there is already too much burning (or wildfire) going on in a certain area to authorize additional burns. Also, prescribed fires are typically required to be extinguished and mopped up by 5:00 PM to avoid that night time smoke. Again, that does not mean that everyone out there always follows the rules, but they risk stiff penalties if they break them. Finally, there are federal Environmental Protection Agency (EPA) regulations for levels of particulate matter that are allowable in the air on a daily and yearly basis. The state air quality agency has to monitor and make sure that all parts of Florida are "in attainment" of the regulations, and otherwise some sources of pollution have to be shut down, and prescribed fire is the easiest target. The state forestry agency has stay within requirements of the air quality agencies by limiting the amount of smoke released by burning through the burn authorization system. The EPA regulations are actually pretty strict and getting stricter, but Florida’s air quality has continued to improve over time to stay in attainment, with very rare exceptions, and those usually attributable to wildfires.

Unfortunately, sometimes smoke is incorrectly attributed to prescribed fires, when in fact it is from a nearby wildfire. Several times last year I heard on the local radio that smoke in Tallahassee was from a prescribed burn, right in the middle of a burn ban when no one was allowed to burn, and when I called the Florida Forest Service they confirmed it was from a wildfire.

Prescribed burning brings back to our landscape only a fraction of the fire that occurred historically. Some people wonder if lightning strikes were really common enough to maintain frequent fires.  In fact, lightning struck and started fires often enough to start fires usually every 1-3 years. However, now with roads, development, and land uses that are not as flammable as the pine grasslands that once covered the area, not as many lightning strikes start fires and those fires are usually easy to contain and put out quickly. However, lightning strikes are still responsible for upwards of half the wildfires in Florida, which is one of the reasons prescribed fire is so important.