November and December were uncharacteristically hot in the Red Hills and Albany areas. We experienced several warm fronts followed by high winds, which resulted in “jumpy” or “edgy” birds on top of not-so-great scenting conditions. During a recent stroll through the woods I noticed grasshoppers still leaping and fluttering from vegetation along with other bugs which is also not characteristic of this time of year. The warm weather early in the season, and good cover from previous spring/summer rains, nurtured abundant native food resources (seeds and insects alike), which has resulted in overall reduced movements, smaller home ranges and less frequent use of the feed lines by radio-tagged bobwhite coveys early in the hunting season. Our recent research on covey detection has shown that reduced movements of coveys decrease the probability of encountering a covey during a hunt. In addition many properties have reported reduced bird numbers and this has translated into a slight decline in hunt success compared to last year for some. Yet other properties have been experiencing a banner year, which may be a result of better localized weather conditions during the previous breeding season. 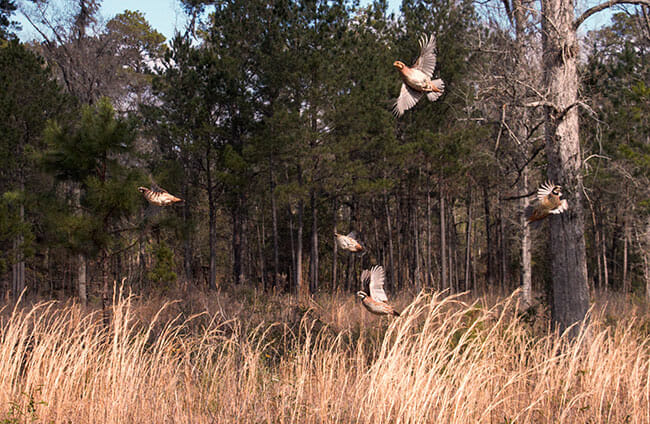 We also observed that bobwhite survival was very good from October through early January, which was associated with the warmer weather and delayed arrival of migratory hawks. However, we paid the price dramatically these past couple of weeks as the cold weather in January pushed raptors into our area in droves. We picked up more than 20 radio-tagged bobwhites in less than 2 weeks due to mortality by hawks during the end of January and early February resulting in a combined 15% net loss of radio-tagged birds in January. Reducing hunting pressure by not overhunting an area during this time can mitigate unnecessary pressure and subsequent movement of bobwhite coveys, increasing their chance of survival. We are hopeful that since the hawks came late they won’t stay long, but in the past we have seen that they can prolong their stay through March (one of the normal peaks in raptor migration in the Red Hills); should they overstay their welcome we may be in for a tough couple of months in terms of bobwhite mortality. 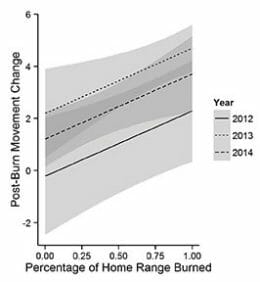 We recently completed a study in south Florida investigating the impacts of scale of fire on bobwhites. This study was a collaboration between Tall Timbers Game Bird Program, The University of Georgia, and the Florida Fish and Wildlife Conservation Commission. We found that not only does fire size dictate the amount of burned/unburned area available to individual bobwhites but greater amounts of home range burned affects bobwhite movements and subsequently their survival (i.e., increased fire size results in negative impacts on survival). The larger the individual burn and proportion of their “normal’ home range burned the greater bobwhites move (see Figure 1). However, the amount of residual structure left standing following a burn also can influence bobwhite movement or displacement. The relationship between burn size and amount of home range burned with that of bobwhite movements and survival can be exacerbated by the presence of migratory hawks.  Thus, careful planning of prescribed burning may prove advantageous this year to maximize survival and winter carryover.

Figure 1. Relationship between percentage of pre-burn home range burned and subsequent post-burn changes in movement for northern bobwhites over 3 years.

We typically recommend burning between March and mid-May to achieve quail management goals and reduce hardwood encroachment. Delaying burning by a week or two will provide a little extra time for the migrating hawks to check out. Coming off the heels of the strongest El Nino event in history, NOAA forecasts a wet spring and summer during 2016, but the 2006-2007 El Nino told a very different story with record setting droughts across the region. Therefore, not burning too much too early will mitigate impacts on quail if drought conditions persist as a result of an unpredictable El Nino weather pattern. Stretching out burning over several weeks to months, and leaving more cover during the presence of hawks from natural migration patterns, can result in increased quail survival and carry more birds into the nesting season. An added benefit of burning later is that vegetation often responds quicker, especially when followed by spring rains, which also provides survival benefits to quail and fosters great brood habitat.