This archive is one of the major repositories for avian photo documentation records for the state of Florida. It contains over 600 slides and photographs of birds from Florida and Georgia. These records were used often in Florida Bird Species by W. B. Robertson, Jr., and G. E. Woolfenden, and The Birdlife of Florida by H. M. Stevenson and B. H. Anderson.

The catalog has been entered into EXCEL (click here to view TTSLIDE.XLS), and many of the photographs are posted on the web along with other photo archives of the Florida Ornithological Society. 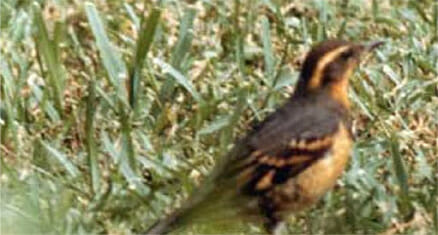 This Varied Thrush was photographed by Robert D. Barber at Hypoluxo (Palm Beach County) on 24 Oct 1977.

The Bird Collection at Tall Timbers contains a diversity of study skins, skeletons, skulls, and other preserved specimens. The collection is dominated by species collected in the Southeastern Coastal Plain of the United States, but also includes specimens from 24 countries (Table 1) and 37 states (Table 2).

The collection consists of 3,946 specimens representing 565 species and 3 hybirds. Some recent taxonomic changes (e.g., separation of the seaside sparrow complex) are not reflected in these numbers. At least 34 species are represented by >25 specimens (Table 3). This series might be useful in studies of geographic variation or age and seasonal differences.

The collection has specimens dating back to the late 1800s, but the peak period of specimen collection occurred from 195070 as the research program at Tall Timbers expanded and a study of tower kills was initiated at a nearby television station.

Most of these specimens were collected during spring and fall migration. The collection also includes approximately 23 species listed by state and federal wildlife agencies as rare or endangered.

Specimens collected in Florida (n=2,861) represent 345 species and come from 50 counties. The largest number of specimens comes from Leon County (n=1,801), but at least seven Florida counties are represented by >20 specimens (see map below).

Most Florida specimens come from the previously mentioned towerkill study conducted in Leon County, but other Florida localities with numerous specimens include St. George Island, Dog Island, Bald Point, and Alligator Point. Specimens from Georgia (n = 630) represent 176 species and one hybrid and come mostly from Birdsong and Sherwood plantations in Grady County. 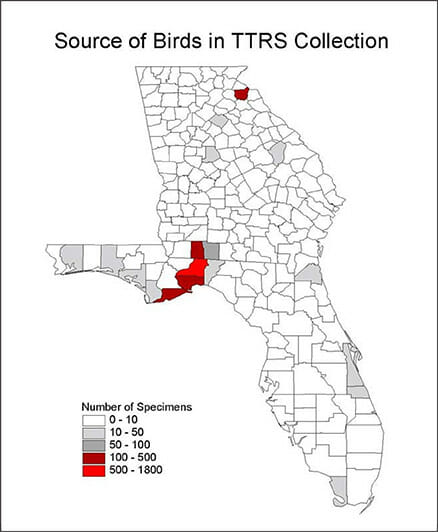 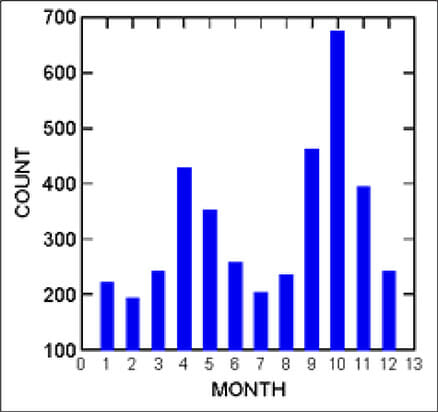 Number of specimens by month where January = 1 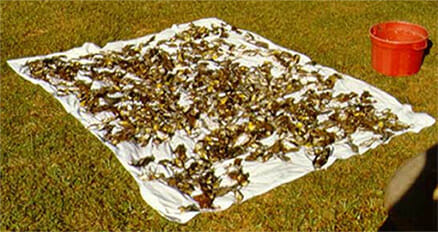 Birds killed at WCTV tower in one night

The insect collection is composed primarily of the renown Lucien Harris, Jr. Lepidoptera collection, which was the basis for the Butterflies of Georgia. Of the approximately 4,000 specimens housed at Tall Timbers, 1,388 have had high resolution images collected as part of the Imaging the Tall Timbers Biological Collections project, and images can be viewed online at the Morphbank Online Database.

Lucien Harris Jr., was one of the country’s most dedicated naturalists and spent a lifetime studying the natural history of Georgia and other southeastern states. Harris worked with Herbert Stoddard in organizing the Georgia Society of Naturalists in the early 1930s. As a result of their friendship and shared interests, Harris donated virtually all of the specimens he collected between 1930 and 1970 to the Natural History Museum at Tall Timbers.

The collection served as the basis for Butterflies of Georgia. It consists of over 1200 specimens not only from Georgia and Florida, but also from Asia, Africa, Europe, North America, and South America. In 2010 Tall Timbers’ Research Program was awarded a biological research collection grant from the National Science Foundation to image and database the collection served by Morphbank for online accessibility (www.morphbank.net). Morphbank hosts over 2500 images of Tall Timbers’ butterfly collection.

To link online to our collection:
http://www.morphbank.net/myCollection/?id=643400 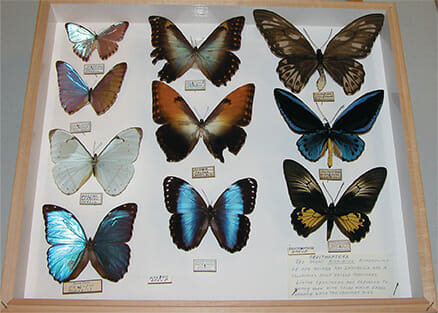 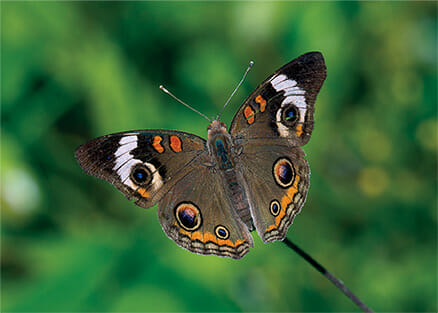 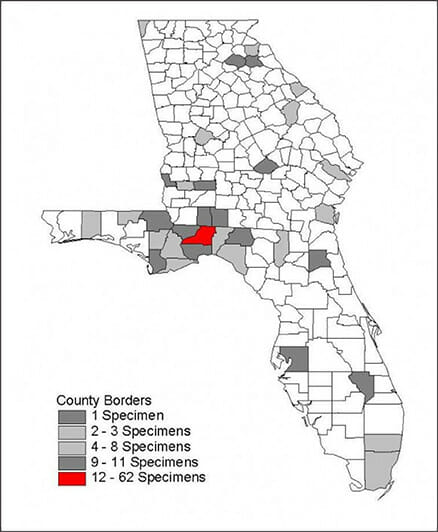 The Tall Timbers mammal collection contains 61 species and 933 specimens mostly collected in the 1960s and 1970s from Florida and Georgia. This collection provides series of specimens that were collected as part of various studies on Tall Timbers. The collection is used to provide comparative material for field studies. 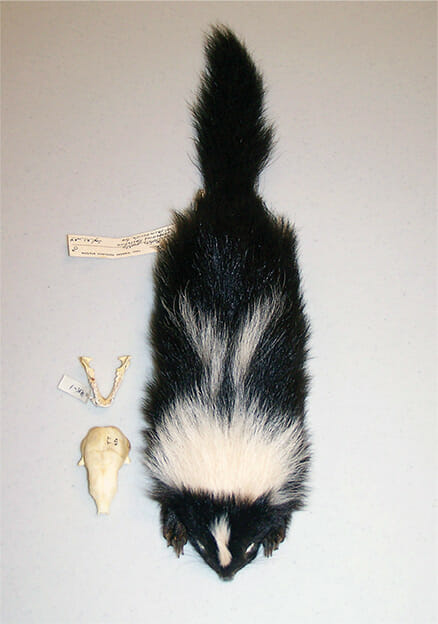 Study skin and skull of a Striped Skunk

Most of the amphibians and reptile were collected by Dr. D. Bruce Means during the early 1980s. The bulk of the collection was transferred to the Florida Museum of Natural History in Gainesville in the 1980s, but a small teaching collection has been retained and entered into an EXCEL spreadsheet (HERPCAT.XLS). Click here to view the catalog file. 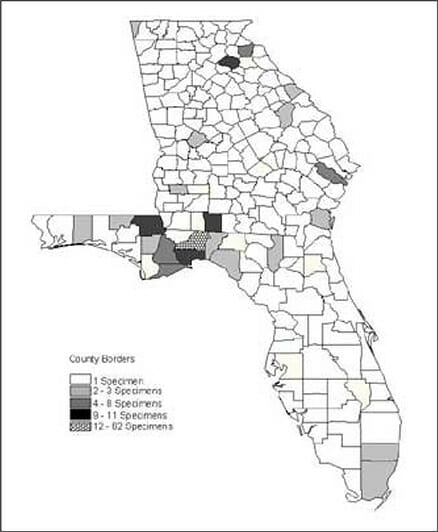 The Tall Timbers Herbarium contains 2,561 species represented by approximately 10,500 specimens. Most of the specimens have been collected or determined by such respected taxonomists as Robert K. Godfrey, Roger F. Thorne, Robert F. Doren, Sidney McDaniel, and Angus Gholson. Specimen data and high resolution images are viewable through the Florida State University Robert K. Godfrey Herbarium Database by selecting “Tall Timbers Research Station’s Herbarium” from the Institution dropdown box. Access to physical specimens is available by appointment. Specimen data and images are also available through iDigBio international biological specimen database. Tall Timbers specimens can be searched specifically by selecting the “Add a field” box and “Institution Code” on the dropdown, then entering “TTRS” for the Institution Code.

For more information about the Herbarium, contact Kevin Robertson. 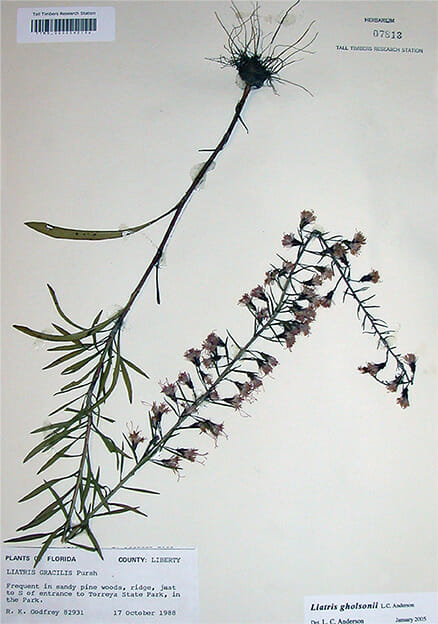 Most of the Tall TimbersGordon Gates worm collection (15 drums containing thousands of specimens) was transferred to the Smithsonian Institution in 1989. This collection had many type specimens and was developed through research conducted in the early 1970s. The remaining collection at Tall Timbers has been entered into EXCEL (WORMS.XLS). Click here to view the catalog file.

Tall Timbers Scientific Collection is supported in honor of Howard Melville and Jean Claire Hanna by their grandchildren. For more information about the scientific collections, contact Jim Cox. 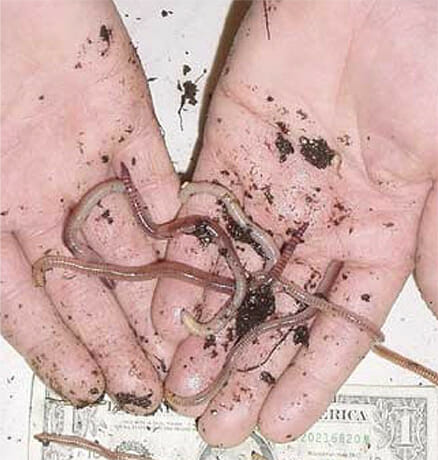 « Back to Information Resources