It is widely known that soil disturbance, such as disking, roller chopping, and deep rutting, reduces wiregrass (Aristida stricta), and that this species is typically slow to come back in such disturbed areas. What is less well known is how it effects the other hundreds of species that make up native upland longleaf pine-wiregrass communities.

In winter 2012 and 2013,  firebreaks that were created with one pass of a tractor and disk in two different longleaf pine-wiregrass native groundcover areas gave us the opportunity to study which plants were reduced and which survived or became reestablished during the subsequent 3-4 years. We compared plant species composition between the disk lines and the undisturbed area just outside of the lines. At the site disked in 2012, there was also a firebreak that had been disked annually which was abandoned that year. We used it to study which plants were capable of becoming established in an area completely without vegetation. 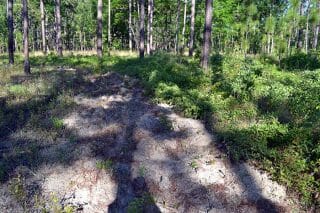 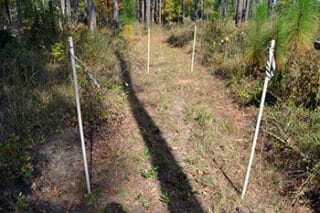 This past fall (2015), at 47 locations along each of the two disk lines, we counted all plant species within 1 square meter frames, both inside and just outside of the disk line. We also counted plants within 47 frames in the abandoned fire break. We ran analyses to determine whether plants were significantly associated with either the disturbed or undisturbed plots, or if they were well represented in both. There were 66 species with large enough samples to analyze.

Results showed that 17 plants were common in the undisturbed area but did not recolonize the abandoned firebreak. Of those, 12 species were also significantly reduced by the single disking 3-4 years after the disturbance. Most of these species have been identified in past studies as being sensitive to soil disturbance, including wiregrass (Aristida stricta), dwarf huckleberry (Gaylussacia dumosa), Darrow’s blueberry (Vaccinium darrowii), deerberry (Vaccinium stamineum), goat’s rue (Tephrosia virginiana), Dixie white-top aster (Sericocarpus tortifolius), bracken fern (Pteridium acquilinum), pinelands twinflower (Dyschoriste oblongifolia), skeleton grass (Gymnopogon ambiguus), running oak (Quercus pumila), sand post oak (Quercus margarettae), and bluejack oak (Quercus incana). Wiregrass was almost completely eliminated by the single disking. Although these species made up only 25% of the plant species analyzed in this study, unpublished data from our Pebble Hill fire plots project suggest that these species make up over 50% of the total plant cover in nearby native areas, such that their reduction would have a large effect on the dominant vegetation.

Another 30 species showed a neutral response to the disking and most of these also were capable of recolonizing the abandoned firebreak. Finally, 17 species either responded positively to the single disking or else were found almost exclusively in the abandoned firebreak. These were mostly common agricultural weeds, which are eventually outcompeted by other plants in the absence of further soil disturbance. 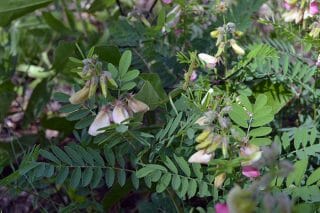 Our study suggests that while most plant species in longleaf native groundcover can survive or become re-established following a small-scale soil disturbances, there is a certain suite of species that are negatively impacted and slow to recover, and which otherwise make up a significant proportion of the vegetation cover in undisturbed areas. These species also happen to be the most flammable, including wiregrass and waxy broadleaf woody plants that burn well at relatively high humidity. As a result, extensive soil disturbance in native areas is likely to reduce the range of conditions that allow for effective prescribed burns.

This study on the effects of disking on native groundcover will contribute to a review paper on effects of soil disturbance on plant species in southern U.S. pine communities.