The first weekend in May, Florida Fish and Wildlife Conservation Commission (FWC) biologist, Pierson Hill and I led a group of fifteen people ranging in age from 6-45 to Dixie Plantation. This trip was a silent auction item Tall Timbers offered at our annual Kate Ireland Memorial Dinner and Auction (the 18th annual event is coming up on September 20). The purpose of the trip was to catch and identify as many species of reptiles and amphibians (collectively known as herpetofauna) as we could over the course of two days. Although we didn’t expect any news worthy species to be caught, you never know when you have 9,000 acres at your disposal. 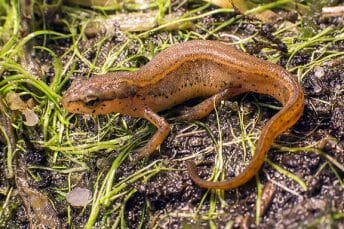 While dip-netting a small wetland we caught several larval newts. The newt life cycle is like that of a frog, the newts lay eggs in water and tiny larva hatch out with gills. These larval animals live and feed in the water until they eventually absorb their gills and transition to a terrestrial form. We knew that these small, one inch creatures were larval newts but assumed they were the common newt that is widely found throughout the southeast and also found on Dixie. Hill decided to keep one individual and allow it to undergo metamorphosis in a tank to ensure that it was indeed the more common species. After waiting two months, the newt started to develop the diagnostic stripes indicating that it was in fact, the rare striped newt!

The striped newt has no listing status beyond being recognized as a “Species of Greatest Conservation Need” in Florida, and is listed as state threatened in Georgia. The striped newt is currently a candidate species for Federal listing due to the disappearance of populations from many areas of their former range.