The 2011 year ended by being the second driest year on record in over 100 years. In Tallahassee, the rainfall deficit for the year was more than 24 inches. Throughout the region the effects of the drought have caused gum ponds, cypress domes, depression marshes, and small creeks to go dry. Even larger streams, such as Spring Creek, had zero flow for portions of the summer. The extended forecast, for the first three months in 2012, has predicted continued below average rainfall and above average temperatures, which means the continued drying of fuels and below normal water levels lead to exaggerated fire effects. If these predictions remain accurate, the spring prescribed burning conditions could be very dry and problematic.

The effects of the current drought can be observed throughout all habitats; and its impacts were even more evident on trees and plants that had been burned in the spring of 2011. Many types of forested wetlands that are adapted for periodic prescribed fires at low intensities have experienced, in recent years, more thorough and intense burning. Many larger established trees, including cypress, have showed signs of stress and some mortality has occurred due to recent fire. Additionally, there have been reports of peat/muck fires in cypress domes that have burned for months causing extensive long-term changes to the system. A prolonged dry period, such as predicted, has some people concerned about the effects of prescribed fires in forested wetlands for the upcoming burn season. Upland habitats were also influenced by the dry year we observed. Upland groundcover that typically responds favorably to fire has reduced structure and composition in many places throughout the region. The continued dry conditions have many landowners/managers evaluating their upcoming burn plans for 2012. 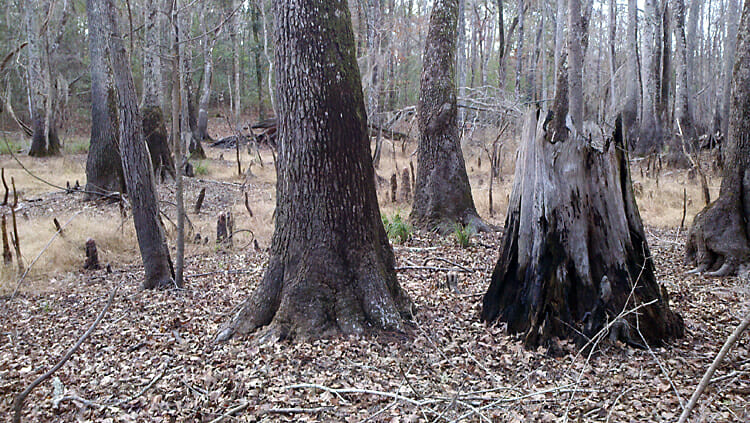 Managers and prescribed burners should consider taking a conservative approach to the amount of acres burned this season and to the intensity of fires used. A recommendation is to focus burning efforts exclusively on two-year or older roughs and problematic hardwood areas, and to minimize burning in last year’s burned stands. Quail oriented properties should focus on burning approximately 40-50% of their uplands versus the typical 60-70%. This should help to provide enough quality groundcover in the early portion of the breeding season and minimize predation. And, managers can always burn more in April and May if drought conditions don’t persist. Another consideration is to burn in smaller patch sizes, keeping burn patches in the 5 to 50-acre range, with adequate amounts of nearby unburned patches. Also, whenever possible, consider starting the burn season in January or February where the fires will not impact your quail hunting. By starting early you can capitalize on the wetter winter months and begin to slowly stagger your burning over to March and April. Burning smaller amounts each day, at smaller scales, over a longer period of time, should allow prescribed burners more flexibility to choose conditions that will create the best fire intensities for the conditions on the ground.

Prescribed burning in dry conditions creates a challenge for managers and prescribed burners because extreme fire intensity can be stressful on timber causing unwanted mortalities and long-term negative impacts to the system. When it’s dry, it is much more important to be observant of the affects of weather conditions on fire intensity. Understanding the effects of key weather parameters, such as days since last rainfall and relative humidity, on fire intensity is important. Additionally, fire intensities can be mitigated by the firing techniques used. Whenever possible, consider firing techniques, such as backing fires or spot head fires that could minimize fire intensity. Patience should be considered a virtue this season; backing fires will reduce fire intensity, but will still accomplish the desired hardwood control needed. Reducing fire intensity will be even more critical when burning more fire sensitive timber, such as in forested wetlands. Often this timber can handle low intensity fires, but hot fires will release a lot of heat that can kill mature trees and potentially start muck fires that can have long-term effects. Finally, another good tool for prescribed burners to consider using and understanding is the Keetch-Byram Drought Index (KBDI), which is a regional drought severity indicator used by state agencies to determine if burn authorizations will be allowed. For more information on the KBDI visit the Florida Forest Service website: http://www.fl-dof.com/fire_weather/information/kbdi.html, or Georgia website: http://weather.gfc.state.ga.us/Maps/kbdi.gif

Another consideration for conservative burning this year is the above average longleaf seed production seen throughout the region. The proliferation of seeds that dropped in November and December have begun to germinate and can be seen as little green wads of tender needles in places were mineral soil is exposed. Newly established longleaf seedlings are extremely susceptible to prescribed burning during their first year. To improve seedling survival chances, consider not burning this spring in localized areas, typically ranging in size from 0.5 to 25 acres. To maximize establishment of it is important that mature longleaf are nearby as a seed source and that the seed can make contact with mineral soil.

For many Tall Timbers members, the use of prescribed fire is absolutely critical for maintaining the forested landscapes we depend upon and appreciate. Therefore, in order to retain the respect of our neighbors, it is important as a unified group to be mindful of the impacts our fires and smoke have on the surrounding communities. While this is always true, it is especially important in a year such as this when, the use of prescribed fire may not seem as relevant in these current conditions. For more information please contact Tall Timbers at (850) 893-4153 x 226.