To paraphrase actor Sam Elliott, “Chicken: It’s what’s for dinner.” The United States, the world’s leading producer and consumer of beef, is now the world’s largest poultry producer. In 2015, more than 9 billion broiler chickens were produced in the U.S.  America also leads the world in per capita chicken consumption, averaging a whopping 90 pounds of chicken per year per person. Most of these chickens are raised in the nation’s “broiler belt,” which spreads across the southeastern U.S. and up the Atlantic coast to Maryland and Delaware. Georgia is now the country’s number one chicken producing state and the presence of major poultry growers is rapidly expanding in the southwest portion of the state.

Unfortunately, there is a downside to a staggering 1,400% increase in the amount of chicken sold in the U.S. since 1950 — widespread nutrient pollution of surface waters. The source of this pollution is runoff from the massive amount of highly concentrated waste produced by tens of thousands of chickens housed in each commercial poultry barn. (Barns are often co-located with as many as 6 – 10 on one site). 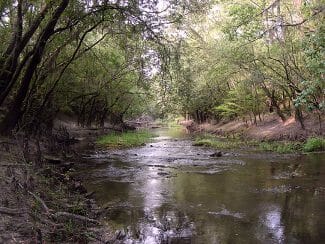 Responding to local residents’ concerns about nuisance issues and Tall Timbers’ staff concerns about potential impacts to shared Red Hills’ water resources, in May 2016, the Grady County Board of Commissioners issued a moratorium on the construction of new poultry barns. Tall Timbers’ planning coordinator Neil Fleckenstein consulted with current and retired researchers at the University of Georgia Department of Poultry Science to better understand approaches to mitigate potential water quality impacts. In conjunction with these industry experts, Fleckenstein developed a series of common sense recommendations designed to protect the quality of Red Hills’ streams, rivers, lakes and the Floridan Aquifer while not interfering with local commercial poultry operations.

Fleckenstein, along with Grady County landowner and former Tall Timbers Executive Director Lane Green, met individually with members of the Grady County Commission to discuss Tall Timbers’ concerns and recommendations. These recommendations include a 100-foot buffer separating poultry barns and stack houses from 100-year floodplains, a 100-foot buffer between poultry facilities and potable water wells, a 100-foot grassed buffer around all poultry barns and manure stack houses, and a requirement for a structured dry stack house for manure storage (as opposed to covering and storing manure on tarps on the ground).

After careful consideration, the Grady County Commission, at their August 24 meeting, unanimously adopted these recommendations (the recommended grass buffer width was reduced from 100 feet to 30 feet). Grady County Commissioners should be congratulated for working with the public and Tall Timbers to protect vital public resources like our surface and drinking waters.