Quail populations – what goes up, must come down

Over the past 14 years we have witnessed 3 quail population “peaks” in the Red Hills, one in 1996-97, one in 2001-02 and most recently last year during the 2010-11 season. If the 2010-11 hunting season was the actual peak of populations remains unknown at this time.  However, in between these peaks there must be a valley! We witnessed a short period of increased avian predation during March, but survival has been relatively good since that time.  Carry-over of birds from the previous season is good, leaving ample birds for breeding. At this point, indicators suggest that the 2011-2012 hunting season will be a good one, but the prediction of drought is of concern.

Our long-term research paints a clear picture that during post-peak years, and drought years, nest predation management and supplemental feeding are more important than during the increasing phases of the quail populations. In fact, during years with drought, or below average rainfall, supplemental feeding increases chick production by as much as double, which is what we saw in 1998 and 2007. So, maintaining a well-designed feeding program is a wise investment in your quail population this year. 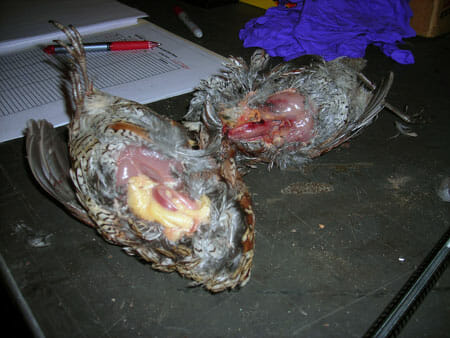 Supplemental feeding ensures constant food supplies during late winter and helps increase early nesting by quail. The dissected quail , at left , shows the higher fat content of a bird captured on a fed area, than a bird from an unfed area, at right.

The large drops in bobwhite populations in the Red Hills have primarily been a result of lower adult and chick survival, which is a function of many factors, such as buffer prey (songbirds, cotton rats, mice and other rodents), burning practices, and weather conditions. When survival rates of quail are normal or above normal, nesting success is not all that important a demographic variable (within reason); even if a nest fails, and most hens are still alive and able to re-nest, they can ultimately bring off a brood. When adult survival is lowered due to increased predation, for instance, each nest becomes more important to fall population density because, on average, hens may not survive long enough to re-nest. We are anticipating a decline in adult survival either this year or next and will continue to report on that in future E-News issues. However to be safe, spending some effort to reduce the number of nest predators is likely to be important this year. On Tall Timbers, where we have not trapped predators since 2006, our predator index was at an all time high, suggesting that regional populations of nest predators are on the upswing.

So, while timber management and burning frequency and pattern remain the most important aspects of bobwhite management, supplemental feeding and nest predator management help to increase populations over time. While they may not forestall a decline, they do help keep the ebbs in quail populations higher than they would be. Reducing the rate of decline not only maintains higher fall populations, but helps recover quail numbers more quickly on the upswings. If you would like us to review your feeding program or your nest predator management program, or any other management aspect please give us a call: 850.893.4153, x226.