What did Miss Kate Ireland mean to Tall Timbers?

Simply stated —the World!Miss Kate was the driving force behind the entire “conservation movement” here in the Red Hills. Of course, she had help and lots of it from her friends and neighbors, and Tall Timbers staff and Board, but she was the first to buy in to the concept of protecting the landscape for continuing hunting and traditional rural land uses for present and future generations to enjoy as she had and as her family before her had. Her first project was the 4-laning of Hwy 319 into a gateway parkway through her beloved Red Hills. As you know, the FL Legislature in 1998 named it the Kate Ireland Parkway in her honor and to recognize her efforts. 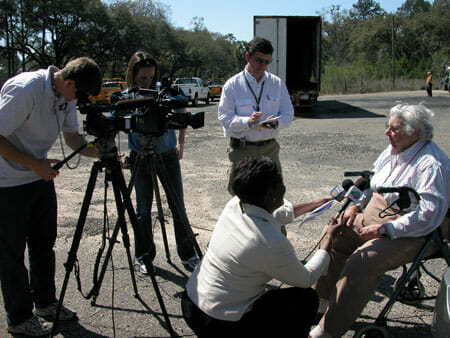 Miss Kate talking to the media before the 2007 Kate Ireland Parkway burn. Photo by Rose Rodriguez

Her next project was to get the fledgling Red Hills Conservation Association up and running. With her as Chairman, it was going to be successful or else! It was so successful in the first year of operation, 1990, that the Tall Timbers Board suggested a merger of the two groups in 1991 and Miss Kate negotiated a deal that has guided the conservation and research programs of Tall Timbers to even greater success that either probably envisioned. She was among the first to donate perpetual conservation easements on her own land, leading by example as she prowled the neighborhood getting others to follow suit. Today the Tall Timbers Land Conservancy is the most successful land trust in the Southeast with more acres protected than any other regional land trust.

In the 1990s, she turned her attention to jump starting a sluggish game bird program at the Research Station, which has soared since with spheres of influence reaching numerous states in the home range of the Northern Bobwhite Quail’s domain. Her efforts were recognized by Tall Timbers in the naming of the Kate Ireland Model Quail & Conservation Area in her honor. 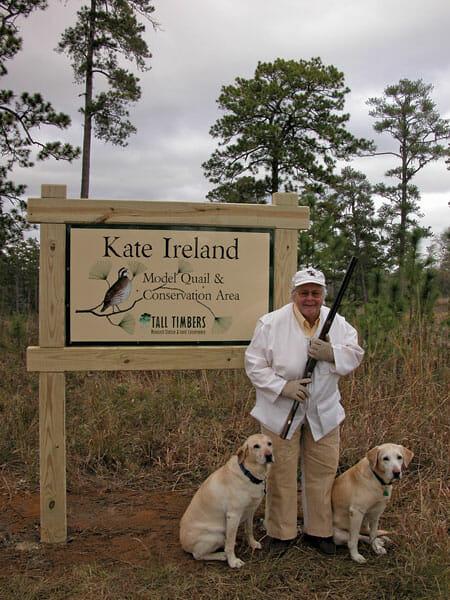 She also was committed to getting the greater Tallahassee/Thomasville community to recognize that the Red Hills Plantation lands were an ecological and economic benefit to the general public by giving generously of her time to speak to community groups, Leadership groups and local officials about her passion for this land, and it worked! She was recognized by both communities with awards and honors for lifetime achievements on numerous occasions. She even donated land for a public park which carries her name on Lake Iamonia. 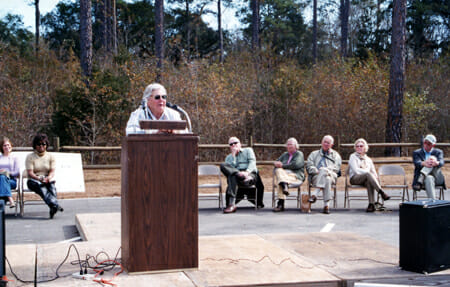 She served as Vice Chairman, Chairman and Chairman Emeritus of the Tall Timbers Board for 21 years and was our chief fundraiser and public relations advocate to the Red Hills plantations. She was the consummate fundraiser! On one occasion, a plantation owner remarked to me that he had just been on the most expensive quail hunt ever at Foshalee with Miss Kate! She used every advantage to raise money for Tall Timbers and helped us acquire the resources necessary to carry out our mission.

We will certainly miss her greatly but she has paved the way for us to carry on and continue to go about doing good with her philosophy of, “Live for the Future and Manage Change”. We are proud, honored and blessed that she walked among us. God Bless You Miss Kate!

This E-News edition is dedicated to remembering why Kate Ireland meant "the world" to Tall Timbers and our community.